ArchDaily announced the winning proposal for the 2012 MoMA PS1 Young Architects Program (YAP) earlier this month. In order to bring you full coverage of the annual competition, we are featuring the other four creative designs that competed against HWKN’s Wendy. Virtual Water, a collaborative design brought to you by UrbanLab, endrestudio and Method Design, formally manifests what is hidden in plain sight: RAIN. The project reveals and plays with thousands of gallons of summertime rainwater that would otherwise be discarded from the PS1 courtyard.

Virtual Water refers to water hidden in everyday products. A pair of jeans, for example, has a 3000 gallon Virtual Water footprint because 3000 gallons of water are consumed in the various steps of its production chain (growing the cotton, dyeing the fabric, etc). 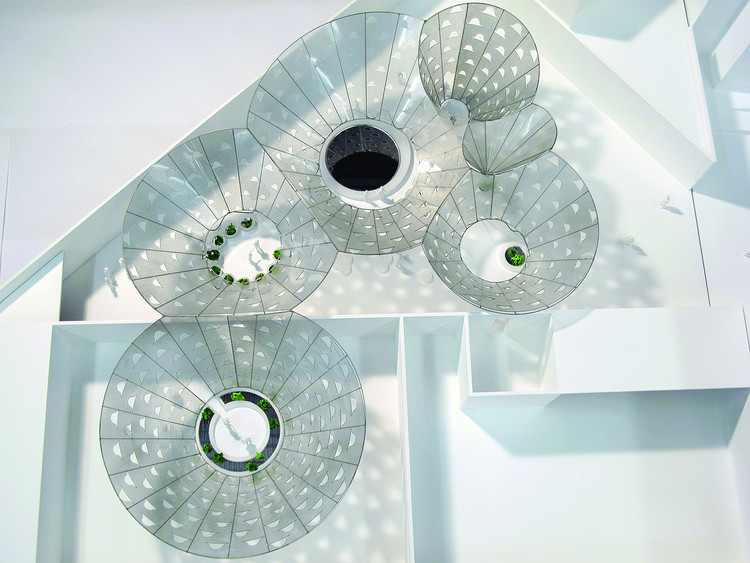 Urban spaces such as the PS1 courtyard also have Virtual Water footprints. Unlike a pair of jeans – which is the material embodiment of water-based processes – Virtual Water footprints of urban spaces are largely made up of immaterial water-based processes: rain. The adjective “virtual” refers to the fact that most of the water to produce a product or maintain an urban space is not ultimately visible in the product or space. This is especially true for urban spaces that are typically designed to defend against rain by diverting rainwater to the nearest underground sewer. Ideally in cities, despite its importance and usefulness, rainwater disappears as quickly as it arrives.

The public courtyard of PS1 has a Virtual Water footprint of over 300,000 gallons of rainwater per year – over 100,000 gallons of rainwater during the summer. Our Virtual Water project collects, cleans, conserves and uses thousands of gallons of this summertime rain. After cleansing, rainwater flows between and over conical canopies to create six unique water-based atmospheres. The atmospheres include (1) a Stream or “Living Machine” that cleans collected rainwater with plants, and demonstrates how nature cleans water with minimal energy inputs; (2) a Waterfall Fish Pond that supplies critical nutrients to the plants in the Living Machine, and demonstrates relations between fish and their wetland environments to clean water; (3) a Splash Pool for visitors to play in shallow bio-filtered water; (4) an active Mist/Sprinkler environment that cools visitors in the summer; (5) a Drip Rain Puddle that creates a serene dripping sound during and after a rain storm; and (6) a Reflecting Pool Lounge that is a shaded gathering space and water storage fountain.

The circulation of water cascading over the surface of six conical canopies, collecting in the basins below and shooting back up stands as a powerful analogy to the natural cycle of water. Virtual Water reveals through play and program how much fresh water is “hidden” in the PS1 courtyard. Virtual Water splashes, spatters, dances, foams, reflects, flows, drips, and sparkles day and night.