Shigeru Ban has just launched the office’s most recent project in Nieuw Zuid in Antwerp, Belgium. Named Ban, after its creator, and in collaboration with Bureau Bouwtechniek, the complex puts in place a 25-story residential tower and a separate building, creating a total of 295 residential units. During the breaking ground ceremony, the architect also inaugurated an exhibition of images highlighting his humanitarian work in conflict and disaster areas, in near proximity to the construction site. 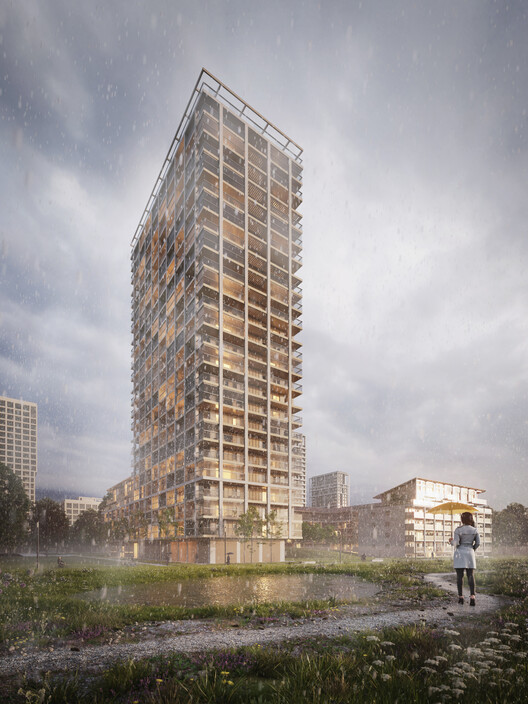 Set to be completed by December 2025, construction on the tower has begun, and the final sales phase is now underway. Featuring Shigeru Ban’s “signature lines in the wood facades”, the project is a hybrid construction of wood, concrete, and steel that generates a more ecological construction than a traditional pure concrete structure.

Inspired by the Japanese courtyard garden, the imposing and sustainable housing project takes on a natural and green area of no less than 6,000 m, designed by landscape architect Bas Smets, winner of the landscape competition to redevelop the surroundings of Notre-Dame de Paris. On that note, Shigeru Ban explains that he “wanted to create a place where people can unwind. […] A green environment is relaxing. In Japan, we have a term for that: shinrin-yoku. Relax by immersing yourself in greenery”.

Renowned for his involvement in humanitarian involvement, Shigeru Ban has also launched an expo highlighting his work from November 25 to January 31, at the Triple Living exhibition space in Nieuw Zuid in Antwerp. Covered with the architect’s Paper Partition System (PPS), “a sturdy frame made of durable cardboard draped with canvases”, used earlier this year for emergency shelters in Ukraine and neighboring countries, the exhibition shows his work in disaster areas around the world.

Co-founder of the Voluntary Architects Network, in 1995, a non-governmental organization that provides fast, low-cost, temporary housing solutions for victims, Shigeru Ban has been aware of his social obligation as an architect, ever since he found out that his cardboard tubes could serve a greater purpose and developed paper shelters to help people displaced by the genocide in Rwanda in 1994. "The PPS system has been previously used successfully in disaster relief efforts after the Great East Japan Earthquake in 2011, the Hokkaido Earthquake in 2018, and the torrential rain in southern Kyushu in 2020".