Hosted at the top floor of Het Nieuwe Instituut in Rotterdam, the Netherlands, the “MVRDVHNI: The Living Archive” exhibition showcases 30 years of MVRDV’s work, looking into the design philosophy of each project and future visions. The exhibition, which sits right next to the firm's latest project, the Depot Boijmans Van Beuningen, highlights the creative process behind each project, how they were developed, and the challenges of preserving their materials and approaches for future generations. 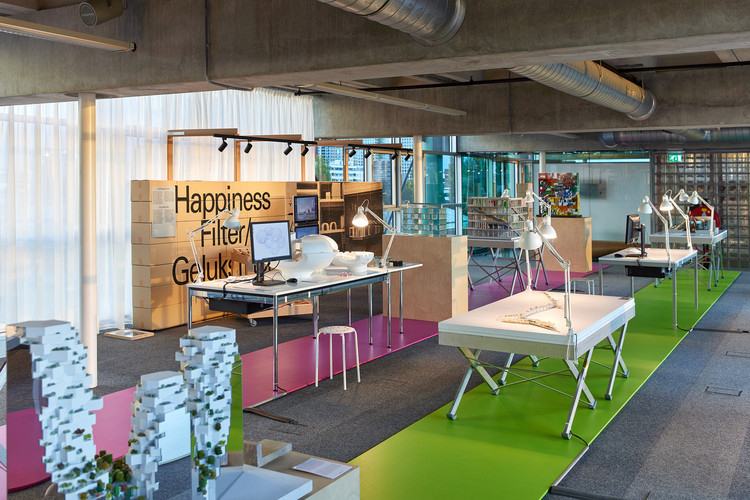 The MVRDVHNI exhibition unveils an archive of not only the projects, but models, photographs, sketches, drawings, and material samples that were delivered to clients before construction. Projects on display are divided into three themes: “human”, which describes MVRDV’s socially-conscious and people-centered designs, “green”, which speaks of its sustainable goals, and “dream”, which includes MVRDV’s ambition for bold and inspiring architecture.

Having been founded in 1993, the firm was among the first generations to create a mostly digital archive. Traditional methods of making the collection accessible were not successful, so innovative tools were created to further reveal the archive. This led to the creation of ProjectScape, a digital software created particularly for the MVRDV NEXT studio, which allows visitors to explore the projects according to their "own lines of investigation". In addition, a software by Namelok was designed to analyze the people in the images by MVRDV, and a search engine by Giacomo Nanni & Francesca Morini allows visitors to look into the thousands of emails communicated at the firm when a word such as “sustainability” is mentioned.

When asked about the meaning of the first 400 projects for this monographic exhibition featuring the MVRDV archives, we were reluctant to declare these projects historic. This is because in our daily practice they are still very much alive. From the very first projects to projects that envision a future in the year 2300 and beyond, there are ideas, philosophies, typologies, and elements that continuously reappear. It therefore became important for the exhibition to elaborate on the present and future of these first projects, and not to view them as artifacts, but living ideas. -- Jan Knikker, MVRDV partner

The exhibition itself also takes part of the three themes, particularly the “green” theme as it will be furnished with used furniture and, after the end of the exhibition, will be reused to generate minimal waste. The exhibition is currently open to the public and will remain on display until September 4th 2022.