Football clubs AC Milan and FC Internazionale Milano will have a new home stadium designed by architecture practice Populous. “The Cathedral” takes inspiration from the city’s architectural landmarks -the Duomo di Milano and the Galleria Vittorio Emanuele – while incorporating technological and material innovation to create a carbon-neutral structure. The project, which replaces the Giuseppe Meazza Stadium, also known as San Siro, is set to revitalize a key urban area of Milan into a district dedicated to sports and leisure. 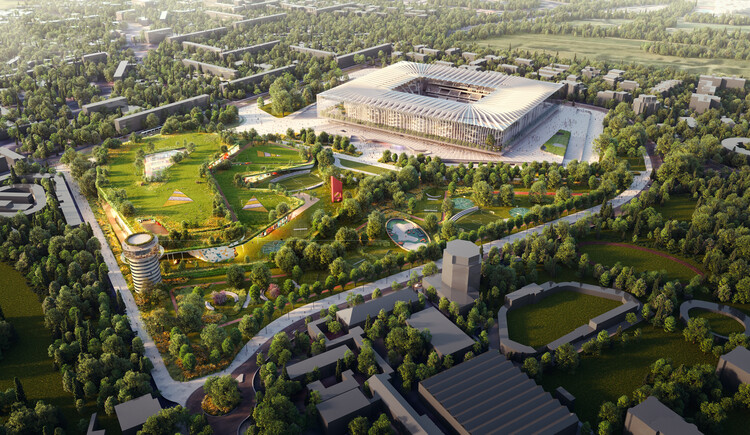 The municipality of Milan has set in motion the reconfiguration of the San Siro neighbourhood into a pedestrian-only district with 40% of its area occupied by green spaces. As a result, the two football clubs have sped up the selection process of the design for their new stadium. The new 60,000-seat venue will be enveloped by a foyer-like space enclosed with a glass façade that draws inspiration from the Galleria Vittorio Emanuele. The structure will feature noise control solutions and exemplary safety measures while providing the city with a new green area of over 55,000 sqm.

Our design envisages the stadium as the most sustainable in Europe and the focal point of a new sports and entertainment district for Milano that will be alive throughout the year. Underpinned by the history and traditions of these two great clubs, it will not only deliver an incredible sporting arena to watch football in but revitalize the whole area to better serve Milano’s citizens, visitors, fans and their families. - Declan Sharkey, Senior Principal and General Manager, Populous Italia

The san Siro stadium has been home for the two football clubs since 1926, and the replacement has been controversial, many criticizing the demolition plans. A final version of the new design will be presented later in 2022. With extensive experience in sport-focused projects, Populous has designed various iconic sports arenas such as the Wembley Stadium, the main stadiums for the Sydney 2000 and London 2012 Olympic Games, and the Yankee Stadium in New York. 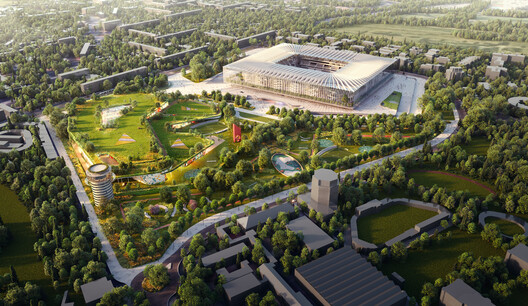