MVRDV has revealed "O", one of four letter-shaped apartment buildings that spell out the word HOME in Franklin Mitte, Mannheim. The 15-storey residential building features a brightly colored structure with 120 apartments, commercial spaces, and a terrace, and is part of Franklin Mitte's complete master plan transformation. 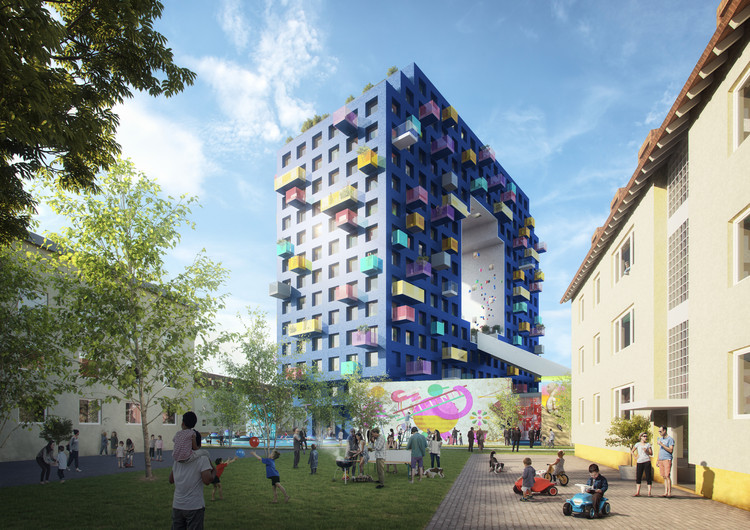 The neighborhood of Franklin Mitte is one of many areas in the city undergoing a total ecological and urban transformation. The newly proposed master plan, which was also designed by MVRDV and MWSP, includes diverse building typologies on a 41-hectare site, such as the “Europa Axis”, a path that cuts straight through the neighborhood, a walkable “Green Hill” with a supermarket, doctor’s clinic, and pharmacy, and four high-rise residential buildings that spell out the word “HOME”.

The ‘O’ building will be accompanied with smaller low-rise buildings next to the Green Hill. The structure will stand out not only for its soaring height but for its blue brick façade and brightly colored glass facade balconies as well. At the center of the ‘O’ is a public terrace that is accessed by a public stairway. This terrace acts as a “living room” for the neighborhood, offering panoramic views and providing a grand entrance to the bar located inside the building’s 4th floor. At ground level, the project is surrounded by plazas, as required by Germany’s clearance area legislation.

By itself, the ‘O’ is an exciting and friendly building at the heart of Franklin Mitte, with terraces and plazas that embrace the liveliness that is coming to this area. But it is even more exciting in how it becomes a part of the city. Working with the H, M, and E buildings, it will give Franklin Mitte a strong, unique identity: Welcome! -- Winy Maas, MVRDV Founding Partner

The low-rise buildings next to the "O" are based on the site that was part of the military barracks and have since been demolished. The proposed master plan rebuilds these units, and “cuts into” their familiar forms. One block is cut into three parts by a staircase leading up to the 4th-floor terrace, whereas the second block is cut into two pieces by the masterplan’s Europa Axis. The intersections of these cut buildings reveal their interior spaces and display public functions such as a library and other commercial spaces.

Earlier this month, MVRDV and Hyde Park BV unveiled their design proposal of Hoofddorp's Station Quarter, a project that aims to transform the area around the existing station into an ecofriendly and affordable urban district. The masterplan will offer 8,500 housing units and renovated train, bus, and metro stations, providing a solution to the housing shortage and access to public transportation without compromising the quality of living. 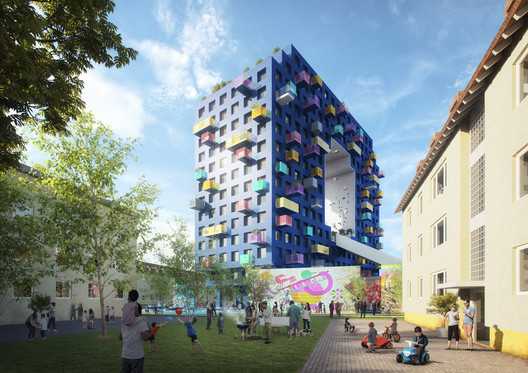