Save
Eyes of the City: Visions of Architecture After Artificial Intelligence
Share
Or
Copy

This book tells the story of Eyes of the City—an international exhibition on technology and urbanism held in Shenzhen during the winter of 2019 and 2020, with a curation process that unfolded between summer 2018 and spring 2020. Conceived as a cultural event exploring future scenarios in architecture and design, Eyes of the City found itself in an extraordinary, if unstable, position, enmeshed within a series of powerfully contingent events—the political turmoil in Hong Kong, the first outbreak of COVID-19 in China—that impacted not only the scope of the project, but also the global debate around society and urban space.

Eyes of the City was one of the two main sections of the eighth edition of the Shenzhen Bi-City Biennale of Urbanism\Architecture (UABB), titled Urban Interactions. Jointly curated by CRA-Carlo Ratti Associati, Politecnico di Torino and South China University of Technology, it focused on the various relationships between the built environment and increasingly pervasive digital technologies—from artificial intelligence to facial recognition, drones to self-driving vehicles—in a city that is one of the world’s leading centers of the Fourth Industrial Revolution. [1]

The topic of the exhibition was decided well before the two events mentioned above made it an especially sensitive one for a Chinese, as well as an international, audience. The Biennale opened its doors in December 2019, just after the months-long protests in Hong Kong had reached their climax and the discussion on the role of surveillance systems embedded in physical space was at its most controversial. [2] In addition, the location the UABB organizers had chosen for the Biennale also caused controversy. The exhibition venue was at the heart of Shenzhen’s Central Business District, in the hall of Futian Station, one of the largest infrastructure spaces in Asia as well as a multi-modal hub connecting the metropolis’s metro system with high-speed trains capable of reaching Hong Kong in about ten minutes.

The agitations occurring on the south side of the border never spilled over into the first outpost of Mainland China. Nevertheless, as the curation process progressed and the opening day approached, the climate grew more tense. In those weeks, it was enough for an exhibitor to merely include as part of his/her proposal a drawing of people on the street standing under umbrellas to prompt heated reactions, with the image reminding visitors of the 2014 pro-democracy movement’s symbol. Immediately prior to the opening, the station’s police fenced off the Biennale venue, instituting check-points for visitors (fortunately, this provision lasted only two weeks before people were permitted again to roam freely inside the station). Despite these contingencies, Eyes of the City managed to offer what a Reuters journalist defined as “a rare public space for reflection on increasingly pervasive surveillance by tech companies and the government.” [3]

Then, in the second half of January 2020, what began as a local sickness in the city of Wuhan [4] —1,000 kilometers north of Shenzhen—spread across the country and beyond, rapidly becoming a global pandemic. Trains between Futian and Hong Kong were discontinued [5], the Biennale venue was shut, while in a matter of weeks, the role of emerging technologies in regulating and facilitating people’s work and social lives became one of the most-discussed topics worldwide, after the grim tally of infections and deaths. In the design field, COVID-19 was seen as exposing and amplifying, on a transcontinental scale, trajectories of change that were already underway.

In an unforeseeable fashion, the occurrences of history in southern China between late 2019 and early 2020 made the question of the city with eyes even more timely and pressing. In the midst of these events, the exhibition had to reinvent itself, experimenting with its form and content in order to continue carrying out its program and contribute to the growing debate. A product of this context, this book is the result of similar processes of continuous adjustment, reflection-in-action, and exchange.

The book challenges the traditional notion of “exhibition catalog,” crossing the three temporal and conceptual dimensions that were also tackled by the exhibition as a whole. The book is composed of three parts, which loosely represent the different laboratories of the exhibition: the curatorial work that preceded it, the open debate that accompanied it, and the content that made it relevant. Overall, the book adopts Eyes of the City as a trans-scalar and multidisciplinary interpretative key for rethinking the city as a complex entanglement of relationships.

The second part of the book expands on a discussion that accompanied the entire curatorial process from spring 2019 to summer 2020, through a rubric on ArchDaily. Tens of designers, writers, and philosophers, as foundational contributors, were asked to respond to the curatorial statement of Eyes of the City: the book contains a selection of these responses covering topics as diverse as the identity of the “eyes” of the city and the “aesthetic regimes” behind them by Antoine Picon and Jian LIU . The evolution of the concept of urban anonymity by Yung-Ho Chang, and Deyan Sudjic, the role of the natural world in the technologically-enhanced city by Jeanne Gang, and advances in design practices that lie between robotics and archivization by Albena Yaneva and Philip Yuan

The third part unpacks the content of the exhibition through eight essays—corresponding to the sections of the exhibition—written by researchers who were part of the curatorial team. These essays position the installations within a wider landscape of intra- and inter-disciplinary debate through an outward movement from the laboratories of the exhibition to possible future scenarios.

Eyes of the City has striven to broaden discussion and reflection on possible future urban spaces as well as on the notion of the architectural biennale itself. The curatorial line adopted throughout the eighteen-month-long process—an entanglement of online and on-site interactions, extensively leaning on academic research—configured the exhibition as an open system; that is, a platform of exchange independent of any aprioristic theoretical direction. The outbreak of COVID-19 inevitably impacted the material scale of the project. At the same time, it underlined the relevance of its immaterial legacy. Eyes of the City progressively re-invented itself in a virtual dimension, experimenting with diverse tactics to make its cultural program accessible. In doing so, it spawned a set of digital and physical documents, strategies and traces that address some of the many open issues the “city with eyes” will face in the future. This book aims at a first systematization of this heterogeneous legacy. 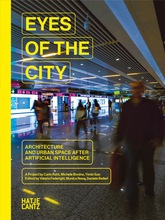 Eyes of the City: Visions of Architecture After Artificial Intelligence
Buy now

VALERIA FEDERIGHI is an architect and assistant professor at Politecnico di Torino, Italy. She received a MArch and a Ph.D. from the same university, and a Master of Science in Design Research from the University of Michigan. She is on the editorial board of the journal Ardeth-Architectural Design Theory-and she is part of the China Room research group. Her main publication to date is the book The Informal Stance: Representations of Architectural Design and Informal Settlements (Applied Research Design, ORO Editions, 2018). She was Head Curator of Events and Editorial for the Eyes of the City exhibition.

MONICA NASO is an architect and a Ph.D. candidate in “Architecture. History and Project” at Politecnico di Torino. She received a MArch with honors from the same university and had several professional experiences in Paris and Turin. As a member of the China Room research group and of the South China-Torino Collaboration Lab, she takes part in international and interdisciplinary research and design projects, and she was among the curators of the Italian Design Pavilion at the Shenzhen Design Week 2018. She was Head Curator of Exhibition and On-site Coordination for the Eyes of the City exhibition.

DANIELE BELLERI is a Partner at the design and innovation practice CRA-Carlo Ratti Associati, where he manages all curatorial, editorial, and communication projects of the office. He has a background in contemporary history, urban studies, and political science, and spent a period as a researcher at Moscow’s Strelka Institute for Media, Architecture, and Design. Before joining CRA, he ran a London-based strategic design agency advising cultural organizations in Europe and Asia, and worked as an independent journalist writing on design and urban issues in international publications. He was one of the Executive Curators of the Eyes of the City exhibition. Currently, he is leading the development of CRA’s Urban Study for Manifesta 14 Prishtina.