MVRDV revealed plans for adaptive reuse of Berliner Union Film Ateliers (BUFA), receiving planning approval to redevelop the first two buildings. The project expands the scope of the site to address a broader user base, including all kinds of creative industries, as well as organisations and individuals involved in activism and social justice. Building on the site's heritage and spatial diversity, MVRDV proposes a series of sustainable transformations of the existing structures, reaffirming the adaptive reuse ethos. 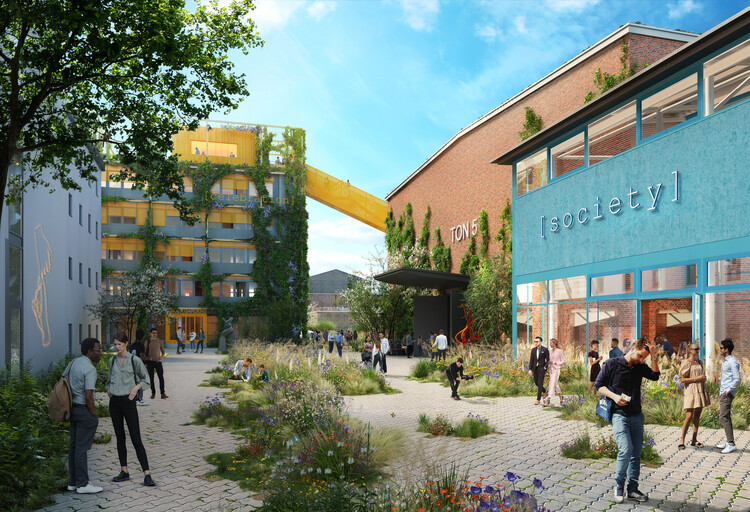 "Repurposing the existing buildings and adapting their use to meet the evolving needs of our urban environments" is what the project proposes, according to developer Fabrix CEO Clive Nichol. Situated on the southern edge of Berlin's Tempelhof Airport, BUFA has been essential to the city's film and television industry for over a century. The masterplan now proposes an incremental redevelopment through the adaptive reuse of the existing structures and the ecological transformation of the landscape.

With its new focus on social causes, Atelier Gardens helps to define a different vision of society and invite more people to join in that vision. By transforming this important piece of Berlin's film history, we extend its lifespan to connect an exciting past with an optimistic future. Jacob van Rijs, MVRDV founding partner

The first of the two buildings set for renovation is a film production studio, now outdated for modern use. The proposal seeks to maximise interior spaces' flexibility without altering the defining features of the listed heritage building, thus increasing the structure's lifecycle. The "low-tech transformation" features a curtain rail that becomes the focal point and main defining element of the space. The gesture exacerbated the flexibility of the space while establishing a contrast with the existing building. The more recent House 1 is transformed by adding a green "wrap" of wooden frames and climbing plants. The structure will host flexible workspaces, a cafe bar and meeting spaces.

The project proposes eliminating large pavement surfaces, thus increasing the water permeability of the site, as well as eliminating vehicles and fostering biodiversity through rooftop gardens and green plazas. At the same time, the design takes into consideration using salvaged steel from the demolition of two warehouses to create a new entrance pavilion. The programmatic framework and development direction for the BUFA campus is yet to be defined through a series of pilot projects that will establish a feedback loop with the uses and the community. The following stages of the development plan will extend the functional landscape to include various sectors, from urban farming to film and education.