HENN has won two major architecture competitions in Germany to design the Brainergy Hub in Jülich and the German Language Forum in Mannheim. The office's Brainergy Hub proposal features a circular design dedicated to renewable energy research, whereas the Language Forum proposal stands as an inviting open space that promotes communication and interaction through unique learning experiences. 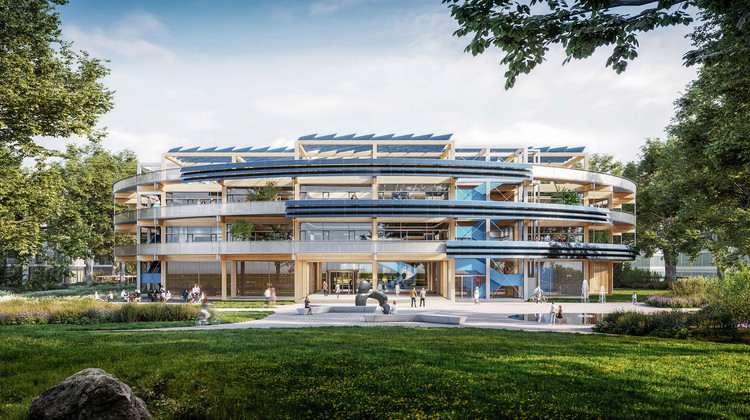 The Brainergy Hub's distinctive design uses innovative material and renewable technologies to create a passive and energy producing structure that will function as "the brain and battery of the Brainergy masterplan". Since the project will be located along the main highway, the circular building acts as a lighthouse, symbolizing Germany’s shift towards renewable energy and a green future.

The design team chose a circular form for the hub since it's "omnidirectional - democratic - always equal". Its circular footprint allows the building to be as pragmatic and efficient as possible, resulting in a pixelated-like unit of repetitive elements that serve as a highly flexible modular system. The structure employs timber, concrete, and steel throughout the architecture and interior design, as well as solar panels on the roof and balconies. The balcony railings act as tracks for photovoltaic panels, transforming the building into an energy-producing sundial. The ground floor houses the meeting rooms and canteen, while the building's circular upper floors house a large central atrium with modular offices around it that grow or shrink according to the building's "pixels".

Organized by the Klaus Tschira Foundation, the German Language Forum competition aimed to "give all sections of the population low-threshold access to a wealth of knowledge about the German language, but will also actively involve people in linguistic research". HENN's winning design explored interactive and collaborative ways people can learn German, and function as both a living language laboratory and a language museum, exploring the role of German in European countries.

The architects found numerous ways to transform the keyword "communication" into architecture. A series of flexible platforms, supported by four rammed-earth cores are wrapped with an automated glass facade. The lower levels are accessible to the public so visitors can contribute to expanding the database of the German language. Within the forum, a large floating cube that serves as an exhibition space is surrounded by open and transparent communication areas. In addition to the exhibition spaces and classrooms, the forum also includes outdoor terraces and cafes, as well as research offices. 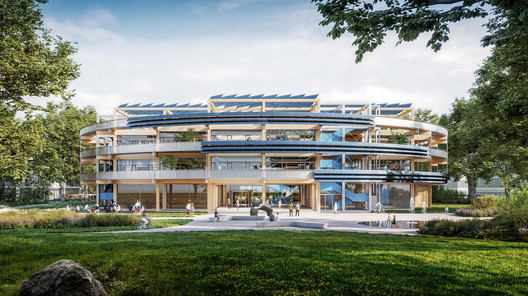