Save
Lendager Group Designs for Disassembly in Milan
Share
Or
Copy

Lendager Group was founded with the explicit goal of becoming the leading sustainable architectural office in Denmark. Exploring the concept of Design for Disassembly (DfD for short), their recent project in Milan is grounded in the growing concern around resource consumption and low recycling rates within the construction industry. Expanding on themes of the circular economy, their work was designed utilizing chairs made of ocean plastic and the pavilion was designed for disassembly. 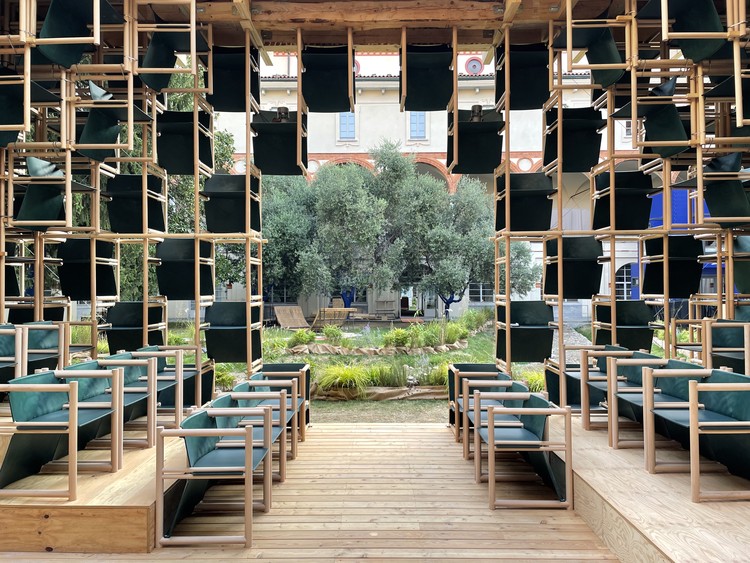 Originally made for the Tokyo Olympics, the Denmark Pavilion came to life during Milan Design Week 2021. A joint effort between Visit Denmark, the Ministry of Foreign Affairs, the Danish Architecture Center, Realdania and the architects, the project was brought to life as a travelling pavilion. As a unique sustainable concept that the group felt deserved attention, the project and exhibition was part of Rossana Orlandis TrasFormationVillage in the courtyard of the Leonardo da Vinci Museum in Milan, where the Danish travel pavilion was the exhibition's largest and most ambitious feature.

Exploring the original brief for the design in Tokyo, CEO Anders Lendager noted how “in the early design phase, prior to the winning competition proposal, we looked into what Japanese people associate with Denmark. Two things stood out: design and craftmanship. Outside Tokyo there is a museum dedicated to Danish design chairs – that is commitment! We wanted to tap into that narrative. After stacking a handful of classical wooden dining chairs in the meeting room, we were convinced - we wanted to design the pavilion out of chairs!”

As architect Andrea Cutieru notes, the DfD process requires a significant amount of planning early on in the design phase, and there are strategies and principles to consider when working to ensure the architectural object holds value once it reaches the end of its life. Events such as the Olympics and Milan Design week have historically been characterized by the consumption of materials, which too often end up as waste. For the Denmark Pavilion, the Lendager Group aimed to develop a sustainable exhibition model that made sense in both a local and international context. This was achieved by designing the pavilion of chairs so that it was prepared for disassembly and that the components can be reused in future buildings, before they eventually end up as furniture.