Andreas Ruby, Director of the Swiss Architecture Museum shares his thoughts on the wrapped Arc de Triomphe installation by Christo and Jeanne-Claude, in a 3 part essay, converting a monument glorifying war into a monument of decolonization. The temporary installation opened to the public on September 18, 2021, and will be dismantled starting October 3, 2021. 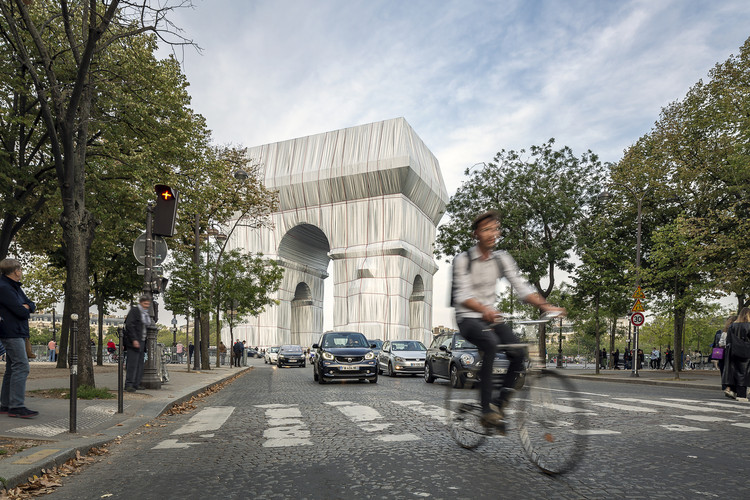 Today the Wrapping of the Arc de Triomphe by Christo and Jeanne-Claude will begin to disappear, but I don’t think the building will ever be the same to me. Something has happened with it during this temporary transformation that I cannot unsee. The wrapping of the Arc has made me understand why I always had difficulty to find this monument beautiful. It’s their artistic concealment that made the pompous gesture of congratulating yourself on a military victory blatantly apparent. Powerfully muted by a humbling estrangement effect, the monument began to feel hollow and completely changed its meaning. I felt I was standing in front of an epic wall of shame. Shame about the unspeakable pain and suffering brought over millions and millions of people caused by the brutal colonization of their countries and the forceful extraction of their resources in the course of the Western political project of world domination. Even if the immediate purpose of the Arc de Triomphe was to glorify the French Army’s victory over an Alliance of Austrian and Russian troops in the battle of Austerlitz in 1805, the monument has come to embody more than that. It stands for Napoleon’s political mission to conquer the world and by extension the whole concept of imperialism. 1830, six years before the completion of the Arc de Triomphe, France invaded and conquered Algiers. This act of military aggression ushered in the 2nd colonial empire that was to subject the entire Sahara region and the majority of Western and Central Africa under the political rule of France.

Embedded in the ground below the Arc de Triomphe there are a number of memorial plaques commemorating the lives of French soldiers from different wars throughout French history. One of them commemorates the French Victims in the Algerian War 1952-1962, in which the French army tried (and ultimately failed) to prevent Algerian independence. I love France, its people, language, culture, and landscapes, I lived and studied here and come here more often than to any other country. Being German I am painfully aware of how difficult it can be for a nation to confront its history. As every human life taken in war is a reason to mourn, I wonder if the Arc would not be an adequate place to also recognize the Algerian soldiers and civilians who lost their lives in the Algerian war trying to free their country from the colonial rule of France. As well as the lives of more than 200 Algerians who, during a demonstration of 30.000 defenseless Algerians in Paris on Oct. 17th, 1961, were being hunted down, shot and their corpses thrown into the Seine by the French Police under the command of Maurice Papon, a chief collaborator to the Nazis during the Vichy government who was responsible for the deportation of 1560 Jews from France to German concentration camps. As I was contemplating the Arc softly wrapped in its lusciously layered silvery cloth gracefully blowing in the wind, it slowly started to transform into a different monument – one that does not honor triumph but loss.

For me, the wrapped Arc de Triomphe became a monument to decolonization which the entire Western world urgently needs to engage in now, with honest and true commitment. It’s a project that can begin to gain credibility through the acceptance of the wrong and harm that was done and a gesture of apology and respect to those who left their lives. For me, the wrapped Arc did that beautifully. Not with anger or vengeance, because those are pointless sensations that can only reiterate histories we need to overcome, but with softness and empathy. I went to the Arc two times on its last weekend, staying there for a couple of hours each. I witnessed a visceral impact that a photograph can’t account for, but which I could only sense standing in front and under this enormous structure. I feel truly grateful to have been able to see this unique project. And even though it will now disappear physically, I hope it will stay in our hearts and memories to inspire and empower us to act differently than people in times past. Therefore: Thank you, Christo and Jeanne-Claude, for a truly unforgettable and positively unsettling experience. 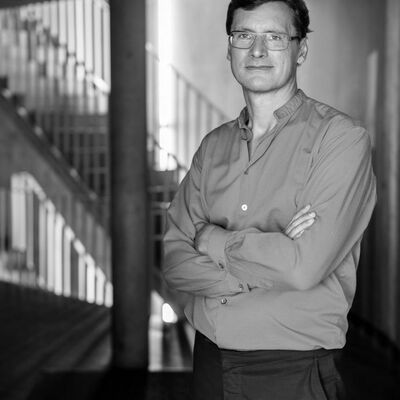 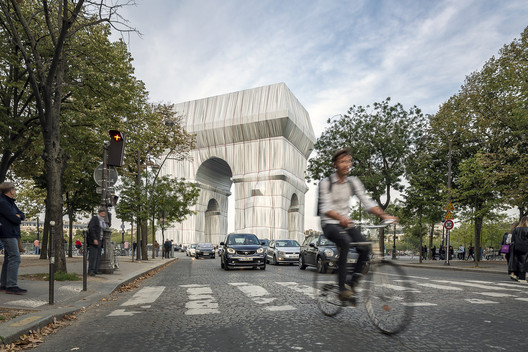