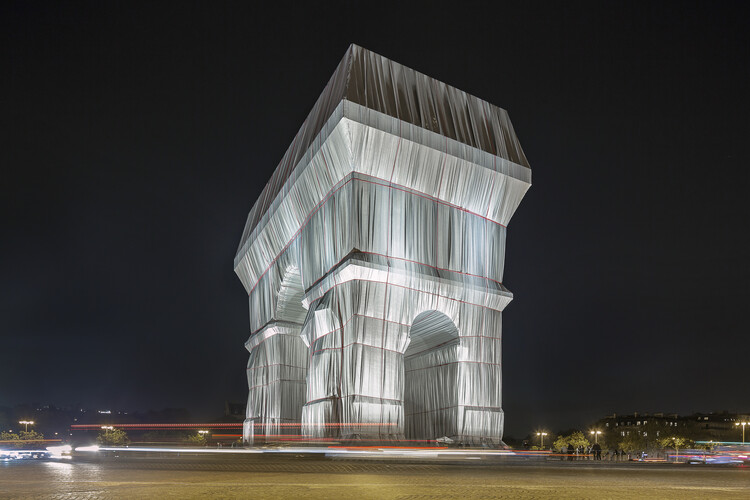 “It will be like a living thing that comes to life in the wind and reflects the light. The folds will move, the surface of the monument will become sensual. People will want to touch the Arc de Triomphe”, said Christo at some point about his project. The intervention has attracted big crowds over the weekend, as the temporary project makes for an intriguing sight. The road junction surrounding the monument, Champs-Élysées and other nearby streets were closed to traffic and on Saturday and Sunday, allowing people to experience the installation unrestricted.

The intervention was first designed in 1962, and in 2017 Christo returned to the idea when the Centre Pompidou proposed a retrospective of the Parisian period of his artistic career. Almost 60 years after its ideation, the project is finally on view, albeit concretized posthumously. As with most of the pair’s urban interventions, the installation was financed by the artists themselves through the sale of their artwork, an aspect that Christo and Jeanne-Claude saw as a guarantee of their artistic freedom.

The late artistic duo Christo and Jeanne-Claude were renowned for interventions in public spaces, some involving architectural landmarks, including Pont Neuf or the Reichstag in Berlin. Following the passing away of Christo in 2020, L’Arc de Triomphe, Wrapped was carried out by his team, according to the artist’s wishes. The project will be on display until October 3rd.