Save
Christo, the Bulgarian Artist, Famous for Wrapped and Monumental Outdoor Projects, Dies At 84

Christo Vladimirov Javacheff, best known as Christo, has passed away at 84 years old of natural causes, in his house, in New York City. The Bulgarian artist, best known for wrapping The Pont Neuf in Paris and the Reichstag in Berlin, has created along the years, with his late wife Jeanne-Claude, large-scale architectural interventions in urban and rural environments.

Generating monumental environmental projects, Christo’s work, in collaboration with his late wife Jeanne-Claude transcended the set boundaries of art. Their interventions, often decades in the making included Wrapped Coast in Australia, Valley Curtain in Colorado, Surrounded Islands in Miami, The Pont Neuf Wrapped in Paris, The Umbrellas in Japan and California, Wrapped Reichstag in Berlin, The Floating Piers at Italy's Lake Iseo, and The London Mastaba on London's Serpentine Lake.

Born in 1935 in Bulgaria, Christo studied at the Fine Arts Academy in Sofia. Fleeing his native country in 1957 and then Eastern Europe, he moved to Paris in 1958 where he met his wife and life partner Jeanne-Claude Denat de Guillebon, while he was painting a portrait of her mother. Though he spoke almost no English, the artist moved to New York in 1964 where he spent 56 years. At his side throughout his life and career, Jeanne-Claude passed away in 2009.

Starting up by wrapping objects, Christo knew all along that he wanted his interventions to take on bigger scales. In the ’60s and ’70s, he drew plans of his aspirations, hoping to realize his sketches one day. He first wrapped the Museum of Contemporary Art in Chicago, in 1969, and then later that same year, he wrapped a million square feet of coastline near Sydney, Australia.

Always praising the creative process, in an interview with The New York Times in 1972, the conceptual artist stated clearly that for him “esthetics is everything involved in the process — the workers, the politics, the negotiations, the construction difficulty, the dealings with hundreds of people. The whole process becomes an esthetic — that’s what I’m interested in, discovering the process. I put myself in dialogue with other people.”

Controversial, Christo’s projects have always faced bureaucratic hurdles and harsh critical reviews. Loved by the public, his “picturesque” interventions have been anticipated and photographed. His rise to fame started with an intervention entitled Surrounded Islands, where the artist “dressed up” 11 tiny islands in Biscayne Bay in South Florida in pink polypropylene, creating floating tropical flowers.

Always giving the public something intriguing to look at, his projects question the fundamentals. In 1985, he completed the wrapping of the Pont Neuf in Paris with 440,000 square feet of honey-colored fabric. After the fall of the Berlin Wall in 1989, his 1971 sketch of a wrapped Reichstag in Berlin came to life and his work was completed in 1995.

In 2016, Christo gave the public the chance to walk on water, with his installation entitled “The Floating Piers,” completed in Northern Italy, using nearly two miles of saffron fabric to produce a pedestrian walkway connecting two small islands in Lake Ice to the mainland. In 2018, on the London's Serpentine Lake, the artist created a floating mastaba, or flat-topped pyramid, made of oil drums.

Planning to wrap the famous Arc de Triomphe in Paris with recyclable blue fabric, Christo has passed away before realizing his intervention. Nevertheless, the project, first conceived in 1962, scheduled for September 2021 is still on track. In fact, Christo's office released an official statement stating that the artist "lived his life to the fullest, not only dreaming up what seemed impossible but realizing it. Christo and Jeanne-Claude's artwork brought people together in shared experiences across the globe, and their work lives on in our hearts and memories. Christo and Jeanne-Claude have always made clear that their artworks in progress be continued after their deaths. Per Christo’s wishes, 'L'Arc de Triomphe, Wrapped' in Paris, France, is still on track for Sept. 18–Oct. 3, 2021."

Additionally, the artist's large exhibition at the Center Pompidou, bringing together works done in partnership with his late wife, Jeanne-Claude, during the period in which they lived in Paris, will be on view this year, from July 1 till October 19, 2020. 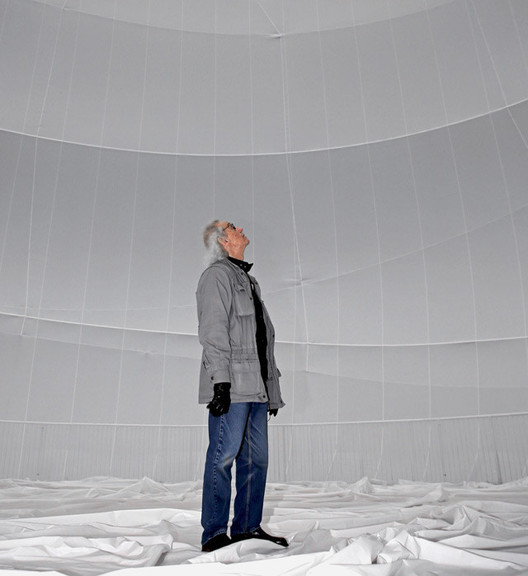