The Bulgarian artist Christo will wrap the famous Arc de Triomphe in Paris with recyclable blue fabric in his next work. The work, which will open on April 9 and last for two weeks, coincides with the artist's large exhibition at the Center Pompidou, which brings together works done in partnership with his late wife, Jeanne-Claude, during the period in which they lived in Paris.

The idea of enveloping the great Arc situated at Place de l'Etoile is not new. The first sketches date back to 1962, when the couple lived near the monument, however, the proposal was never carried out or even developed. According to the New York Times, along with the show at the Pompidou, the artist was "eager to do something beyond the exhibition." He sought to continue the old project designed together with Jeanne-Claude and later obtained authorization from the National Monuments Centre and the French government.

Funded entirely by sales from collages, sketches, mock-ups, and studies for the project, the work, entitled L’Arc de Triomphe, Wrapped (Project for Paris, Place de l’Étoile-Charles de Gaulle), did not rely on support from private or public institutions. When completed, visitors will be able to view the space, as the government is keeping the ground and underground spaces open.

Jeanne-Claude and Christo are world-renowned for similar works, where monuments and/or entire buildings have been wrapped in fabric. Among the architecture already enveloped by the duo are the Roman Wall (Rome, 1973-74), the Pont Neuf (Paris, 1985), and the Reichstag, Germany's Parliament (Berlin, 1995). Their work deals with the material presence of buildings; the duo seeks to shift the perspective of the viewer from what was once solid and permanent into something transient and light.

Via Artsy and the New York Times. 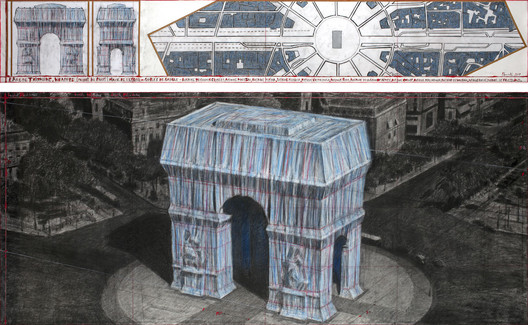