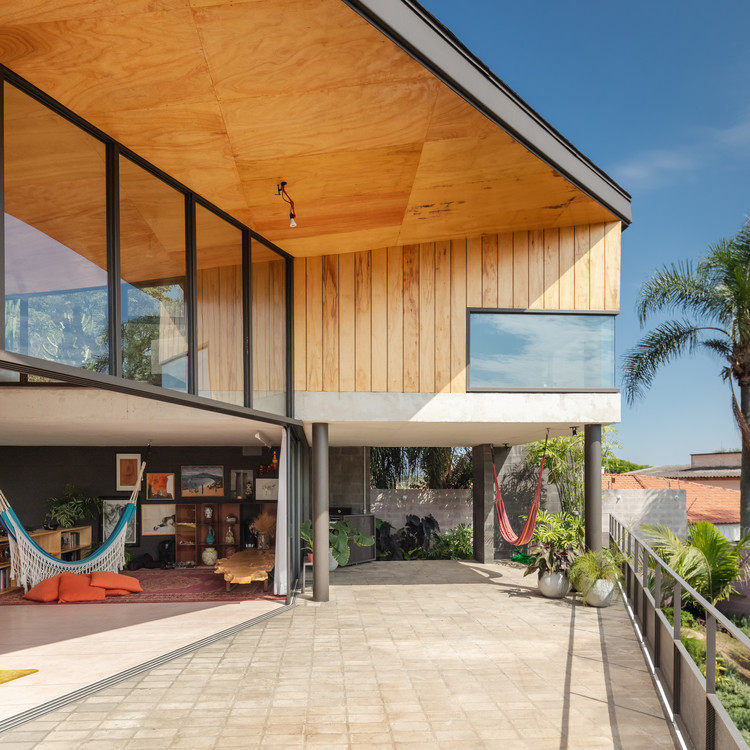 Text description provided by the architects. With a privileged location, the Por do Sol house is next to the famous Por do Sol square, a scene that has been widely acclaimed for exercising the function of a gazebo, being one of the favorite places of paulistas to admire the sunset. Located in the Alto de Pinheiros district, Casa Por do Sol is a single-family house designed to house a couple and their two daughters.

The architect, also a resident of the house, conceived the project by proposing an inversion of the patterns of traditional housing, choosing to allocate the bedrooms on the lower floor and the living areas on the floor above, thus providing greater privacy in the intimate areas while favoring the late afternoon view in the most interactive environments.

Of medium hight , the house respects the irregular shape of the land and opens its facade to the west, allowing residents to enjoy the sunset from the front. Thermal comfort and acoustic performance are reflected in the design techniques, dialoguing with ecological concepts, thus creating an environment that corresponds to the premises of more sustainable housing. With the entire external area draining in combination with the slope of its roof, the house guides 100% of the rainwater to a cistern with a capacity of up to 6,000 liters, thus contemplating the rational and balanced use of water resources.

The project seeks to take advantage of the combination of function and aesthetics in order to achieve maximum acoustic and thermal performance in a sustainable way. As an example, the roof of the house is designed to define the spatiality of the balcony and its inclination is designed to prioritize the incidence of natural light in winter, in the same way that it protects the room from excessive summer sun. With a 30cm gap, the buckram also allows for easy cross ventilation and encourages the exit of hot air at its highest end.

The choice of materials was also aimed at providing the best thermal performance. The use of neutral Saint-Gobain habitat glass was chosen throughout the project, ensuring protection against UV rays and reducing the entry of heat by 70% into the environments. Likewise, the landscaping project also sought to ensure heat reduction, using different vegetation that responds to the needs of the house, thus, on the west façade, a row of banana trees acts as a natural vertical breeze, shading the bedroom façades at the end. pm.

With a mixed construction system, it was chosen different elements that sought better efficiency and agility in construction, which allowed the work to be completed in just 9 months. Cube slabs that appear on the ground floor and disregard the need for a lining were used, guaranteeing a more brutalist and sustainable aesthetic, which was made with reusable plastic forms instead of wooden ones. 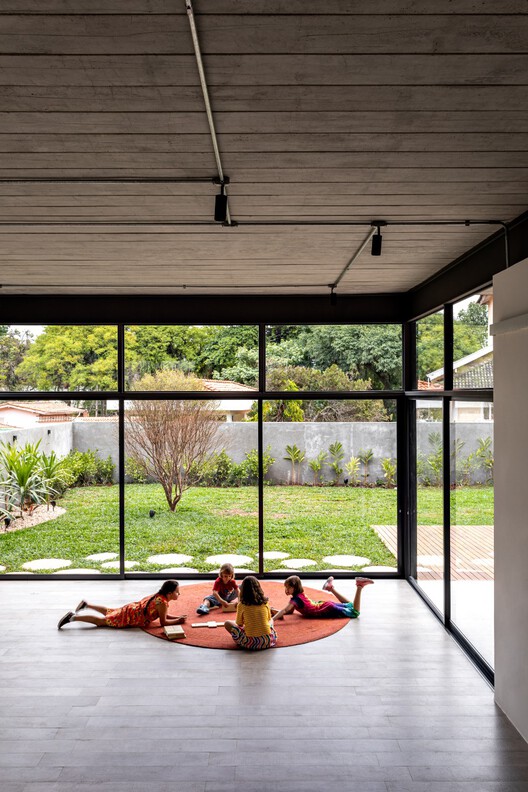