The concept of prefabrication in construction corresponds to elements, parts or entire buildings produced in a factory and transported to a construction site for a quick installation. This represents numerous advantages over traditional construction methods, such as speed, precision in execution, efficiency, cleanliness of the work and, in many cases, cost. Considering that housing is a primary human need, using industrial methods for the construction of affordable and good quality housing has always interested architects, whether to house growing urban populations or for temporary or emergency settlements, on the most diverse scales. After many attempts throughout history, the question remains whether the popularization of prefabrication in the construction field can be a solution to provide greater equity in access to housing.

This idea is by no means new. Architects such as Frank Lloyd Wright, Le Corbusier, Jean Prouvé and Walter Gropius have developed several projects to effectively integrate housing construction with this industry. Specifically, the latter deserves to be highlighted for his efforts on the subject: the publication “The Dream of the Factory Made House”, by Walter Gropius and Konrad Wachsmann, edited by MIT Press, provides an overview of the experiences of the two German architects, their achievements and their many setbacks. The Packaged House System, developed by the two, is a prototype whose ingenuity attracts attention, developed after World War II, which can expand or reduce as needed, but unfortunately, did not survive commercially.

In the Brazilian edition of the 1929 book “Bauhaus: novarquitetura”, there is a quote by Gropius that brings an interesting approach to the subject: “Just as nowadays 90% of the population no longer thinks about ordering made-to-measure shoes, limiting themselves to use mass products as a result of improved manufacturing methods, in the future the individual will be able to order his or her most suitable dwelling from the warehouse. Modern technology is perhaps up to this task, but not the economic organization of the construction industry, which still depends entirely on manual work methods and does not reserve a less restricted role for the machine.” Although there are currently many companies and examples of prefabricated houses, Gropius' prediction clearly did not materialize as he expected and, especially in developing countries, construction is still highly artisanal and the industry is rated as extremely resistant to change and to technological incorporations.

But this scenario has changed. There are two main types of pre-made elements: 2D and 3D. While the first one covers pre-dimensioned elements and panels, which facilitate the transport and customization of the building; 3D prefabs, on the other hand, are three-dimensional structural volumetric systems that can be combined on site to cover other units or systems, usually already including all installations.

The report Modular construction: From projects to products, from the year 2019, points out that “modular (or prefab) construction is not a new concept, but technological advances, economic demands and changes in mindset mean that it is attracting an unprecedented surge of interest and investment. If that happens, it could give the industry a huge boost in productivity, help solve real estate crises in many markets, and significantly reshape the way we build today.” The paper argues that recent modular projects have already established a solid track record of accelerating project schedules. Modular construction can speed up construction by up to 50% and, with the right tradeoffs, it can cut costs by 20%. The approach also has the potential to generate significant cost savings, although this is still more the exception than the norm today.

With prefabrication and modularity, it is possible for the base work to take place while the rest of the structure is built in the factory. At the construction site, the process is fast and is usually carried out using heavy machinery to lift the structures. Less construction time, greater schedule predictability, less labor requirements and less on-site waste correspond to lower final work costs and earlier ownership for commercialization. As designs, processes, tools and technologies advance, costs can also dissipate over time without sacrificing material quality. As more processes are repeated, this allows for efficiencies that significantly reduce long-term costs.

It is precisely the repetition and alleged monotony that many critics of prefabricated systems bring as criticism, under the argument that modularity can hinder creativity and homogenize architectural production too much. As Samuel Gonçalves states in this interview, “more than conditioning creativity, we believe that these systems end up causing a change in the design process. And that's not necessarily negative or limiting. If in traditional architecture we idealize a project and then think about how we are going to build it, in prefabricated architecture this sequence is necessarily reversed. In this case, we first have to understand the system, the way the elements are manufactured, transported and assembled, and only then can we look into the final form of construction. In other words, if in traditional architecture form determines the construction system, in prefabricated architecture it is the construction system that determines form.”

In this regard, Gropius also showed concern, but defended that standardization and adaptability were not dichotomous concepts: "Mass housing demands mass production, and for this purpose the architect must learn to work with industry. Industrialization of the housing process inevitably means standardization; we should not resist this, for standards are the norms of a civilized community and give it unity of expression. However, we must not forget that individual needs and desires vary, and within the limits of social consensus man must be given choice. Man and his world are not static but in a state of dynamic flux, and the dwellings produced by industry must be adaptable and responsive to demands for change and growth. Industrialized housing must therefore be designed for maximum utility, standardization, and interchangeability of the parts and maximum variability of the whole, the house as final product. This industrialized building system moreover is not an end in itself but an integrated part of a larger whole, one level in a hierarchical environmental-social-economic system."

The truth is that, even though they are ubiquitous in the history of modern architecture, the modular constructions that really got off the ground ended up waning over time. The history of American catalog houses illustrates this point well. Currently, there is the possibility on the market of prefabricated systems made of wood, concrete and other materials, as well as options for entire rooms or even prefabricated buildings with impressive execution times. In the case of Brazil, for example, prefabrication has been more common in extensive programs such as schools or hospitals (João Filgueiras Lima's work deserves to be highlighted on the subject and more careful analyses). For single-family homes, there are also some good examples, albeit more timid, that demonstrate the possibilities of the system.

However, whenever we approach construction systems, materials and technologies, it is necessary to take into account the situation of each location and its particularities. The feasibility of the solution varies and, in developing countries, the costs are quite different from those in developed countries. In many cases, the cost of materials, equipment and technology is higher in developing countries, but the cost of labor is much lower. While in Japan and the Nordic countries prefabrication has been a reality for decades, in places where low-skilled labor is cheap, such technologies are still in their infancy. It is also important to add that the affordability of housing is not simply a matter of building technologies. A factor that exerts weight on the total cost of a house is the land price, influenced by the location and proximity of urban amenities. It is vital to address this issue when we talk about possibilities of access to housing.

Structural systems and prefabricated components are extremely efficient in ensuring the minimum use of materials with maximum structural advantage. This, at the same time, requires more complete and detailed projects, preferably through BIM. With the demands of today's world, both for productivity and sustainability, the change from traditional techniques to modular systems will require updates on the part of designers, manufacturers and entrepreneurs. Prefab buildings can be used to erect aesthetically pleasing and solid structures - providing efficiency, quality and accessibility for housing construction or other miscellaneous programs. It is important that technologies seek to incorporate, as far as possible, local materials, knowledge and respect for the characteristics of each region for greater acceptance. 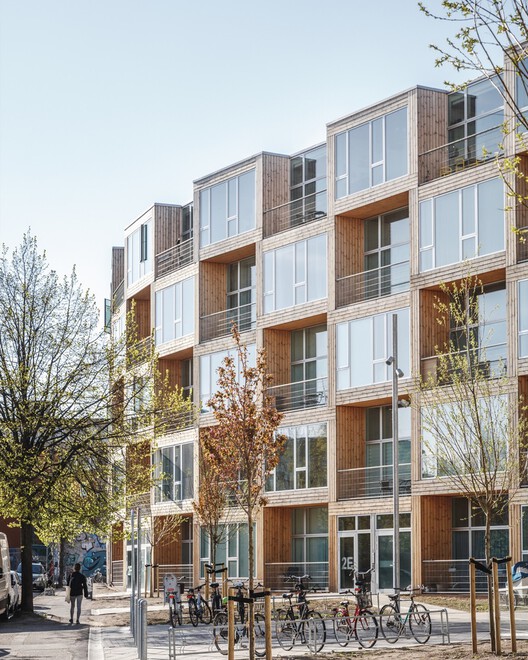