Save
Your Home by Mail: The Rise and Fall of Catalogue Housing
Share
Or
Copy

Housing is one of the most persistent challenges faced by the construction industry, and over the course of decades certain trends rise and fall, as entrepreneurial housing providers carve out new niches to provide for expanding populations and changing demographics. Originally published by BuzzBuzzHome as "The Rise and Fall of The Mail-Order House," this article explores the craze of so-called "catalogue homes" - flat-packed houses that were delivered by mail - which became popular in North America in the first decades of the 20th century.

The testimonials make it sound effortless: building your own house is no sweat.

In the front pages of a 1921 Sears Roebuck catalogue for mail-order homes, a resident of Traverse City, Michigan identified only by the pseudonym “I Did Not Hire Any Help” wrote to the company: “I am very well pleased with my Already Cut House bought off you. All the material went together nicely. In fact, I wish I had another house to put up this summer. I really enjoyed working on such a building, and I do not follow the carpenter trade either.” It’s estimated that more than 100,000 mail-order homes were built in the United States between 1908 and 1940. It was the IKEA of housing, but instead of spending an afternoon putting together a bookshelf, buyers would take on the formidable task of building a house. Or, more commonly, get a contractor to do it. Homebuyers would pick a design of their choice out of a mail-order catalogue and the materials – from the lumber frame boards to the paint to the nails and screws – would be shipped out to the closest railway station for pickup and construction. 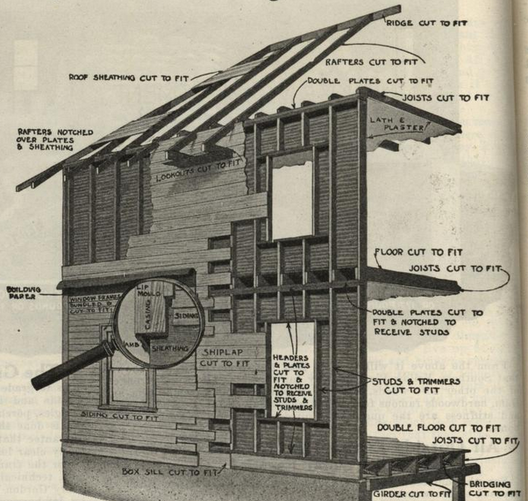 In the first half of the 20th century, mail-order houses, also known as catalogue homes or kit houses, became a phenomenon in Canada and the United States as the population swelled and companies sprang up to offer a relatively inexpensive solution to fill housing needs.

The housing trend was both urban and rural. In the Prairie provinces of Canada, mail-order houses took off in 1917 and 1918 as many farmers grew richer from the high wheat prices of WWI and were able to build bigger homes. However, lumber was in short supply. In the United States, the population of urban dwellers outgrew country folk for the first time in 1919. Cities across the continent, such as Detroit and Toronto, saw manufacturing booms and workers experienced a housing shortage. Mail-order homes became common enough that Buster Keaton even starred in a silent comedy, 1920’s “One Week,” about building a kit house (he had far less luck than “I Did Not Hire Any Help”.)

Sears Roebuck was a popular choice and in Canada, Eaton’s shipped out mail-order houses to the Western provinces. But there were countless other companies now long gone: Montgomery Ward, Gordon Van-Tine Homes, Liberty Homes, Bennett Homes, Sterling Homes, Pacific Ready Cut Homes, Aladdin Homes, Harris Homes and on and on.

“Everyone wanted one of these because you saved money by having the materials pre-cut at the mill,” says Dr. Rebecca Hunter, an architectural historian from Eglin, Illinois. “So instead of paying a carpenter to measure every board from standard length lumber, you had all your framing boards cut to size and they just had to be nailed together.”

Because the mail-order companies bought materials such as the hardware, windows, and millwork in bulk, they were able to pass of the savings to buyers. Hunter estimates that a kit house cost about a third of the price of a traditionally constructed home during the time, making homeownership more accessible to many working class and middle class buyers. She also believes most people opted to hire contractors or carpenters to build the homes, even though the glowing catalogue testimonials suggest otherwise.

But some still tried to the do the job themselves. In 1977, Knight-Ridder Newspapers interviewed Roy Weese, who was still living in the catalogue house he built himself in the Detroit suburb of Royal Oak in 1926. The pieces of his house-to-be, the three-bedroom, two-storey Gladstone model from Sears, filled an entire railroad boxcar. There was pre-cut lumber, buckets of glue, a disassembled coal furnace, and all the necessary bits and bolts. The package even came with clothes rods and laundry tubs. The kit house came with a single-spaced list of all the materials that spanned 14 pages and 22 pages of blueprints.

Weese, who had never built anything before, told the paper, “You look at the roll of blueprints and you’d think I was going to build a factory. Sometimes I thought I bit off more than I could chew.” He did manage to get it all done, starting the process in June and having the housing roughed out by fall.

To get a sense of just how much buyers saved, consider these numbers: Reese told the reporter he paid $3,996 altogether – $2,796 for the materials and $1,200 for add-on costs like hiring a plasterer and electrician. Sears had said getting someone to build a comparable house would have otherwise cost $7,200.

And there were other incentives. Catalogue homes were also popular in industrial towns and commuter suburbs that sprang up just outside of the booming cities.

One of Hunter’s favourite stories involves a canny entrepreneur buying a large parcel of land in Tinley Park, near Chicago, and then cutting it up into separate lots. Buyers would get a lot, a catalogue home design of their choice and a chicken coop with a hundred chickens, the idea being that selling the eggs would help buyers pay off their mortgage.

Big companies also bought mail-order houses in bulk. Aladdin Homes, which started up in 1906 in Bay City, Michigan, became one of the biggest players in the industry. In an 1918 Canadian catalogue, Aladdin describes companies such as Imperial Oil and the Hydro-Electric Power Commission buying homes for their workers in Toronto. Similar stories pop up in Timmins, Ontario, Weyburn, Saskatchewan and Shawinigan Falls, Quebec.

Les Henry, writer of “Catalogue Houses: Eaton’s and Others,” has been tracking Canadian kit homes for decades. Not a week passes without a message from someone who believes they own a catalogue house in Saskatchewan or a mail-order cottage in Muskoka.

“I started out thinking there were dozens, but now I know there are thousands in the three Prairie provinces,” he says. “I keep running into them all the time.” Though he’s unsure of the exact model or company, Henry grew up in the catalogue home his grandparents built in 1917, about an hour out of Saskatoon, Saskatchewan. Standing two-and-a-half storeys, with electricity and indoor plumbing, the house was a mansion in its time.

“It was a very short-lived market,” says Henry, “In the teens, it was just booming because of the high price of wheat. Probably half of all the Eaton’s houses that were ever built were in 1917 and 1918. Some of builders then got into barns and town halls, rinks and churches. Things like that.”

Though the Prairie boom may have dwindled in the 1920s, the real end for mail-order homes didn’t come until a decade later when the Depression killed housing starts across the continent. Many of the companies went belly up. Eaton’s stopped offering catalogue homes in 1932, according to Henry. By the end of the 1930s, only three of the American companies remained in business.

For the companies that survived the hard times, WWII brought along a materials shortage. Then, when veterans returned from the war and home building took off once again, the construction industry changed. Hunter noted tract developments became the faster and cheaper way to build and mail-order homes couldn’t compete with the lesser costs of the new pre-fabrication houses. The first mail-order home company, Aladdin, became the last in the game, eventually closing up shop in 1982.

The housing trend may be long over, but both Henry and Hunter are regularly approached by owners who believe they have a mail-order home. But unless there’s an invoice from the company or, in Henry’s case, a family-member who knew about the building process, it can be a difficult to say definitively whether a home is a kit house.

“The sellers of mail-order houses were not at all interested in unique architectural design. They were interested in selling as many as possible of each design as possible in their catalogue,” says Hunter. “[Mail-order houses] don’t look remarkably different from anything else built in the same time period. It’s a matter of picky architectural detail.”

Hiding in plain sight, mail-order homes have slowly attracted more interest among historical communities bent on preserving them, says Hunter. And while it may no longer be cost efficient to build your own home, there’s still enough nostalgia attached to the era, and romance in DIY work, that Hunter fields frequent requests for plans.

“People have contacted me and said, ‘I really love this house and wish I could get someone to send me the blueprints. I’d like for someone to build me one just like it.’”