Save
History, Public Space, and Urban Interventions Along the US-Mexican Border
Share
Or
Copy 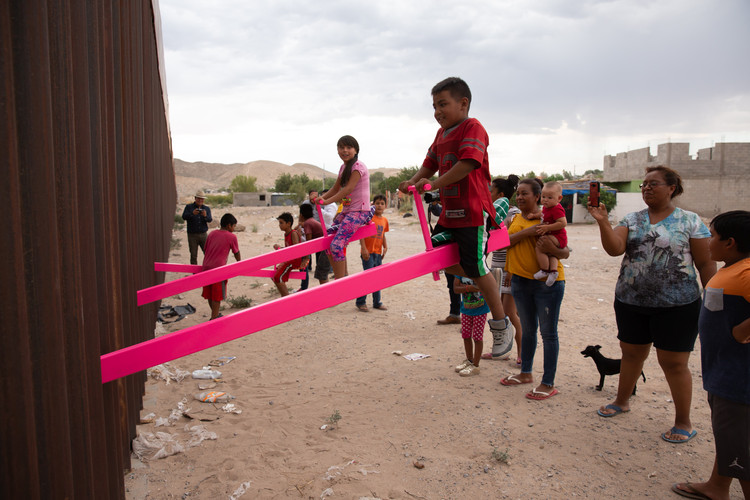 Mexico, a North American country spanning over 1,964,375 km2, features a vast mosaic of different cultures that extends far beyond its geographical boundaries. Nowhere is this diversity more evident than along the 3,141km border stretching from the Gulf of Mexico to the Pacific Ocean, running through 48 counties within the United States and 94 municipalities within the Mexican states.

While certain design characteristics of the region's architecture are found nowhere else, others carry both such extensive historical and cultural significance that it has spread beyond political and geographical borders, following one of the world's most traveled migratory routes.

Countless people from across various professions have come together to try and make sense of the limits of this territory and to also protest against the vitriolic discourse and actions that have impacted it over the years. With the passage of time, diverse collectives of artists, architects, and activists have collaborated to bring installations to places like Tijuana, Ciudad Juarez, and Texas, just to name a few, in an effort to highlight the social processes that define and shape the border region. Here, we highlight a selection of these works.

"Re-Re: The Responsible Return emerged as both a recreational and educative strategy in response to the safety alterations made to urban public spaces in the wake of the Covid-19 pandemic. By using interactive, yet socially distanced, installations, Re-Re's project is a representation of resilience and collective responsibility as communities begin to reconnect post-pandemic."

With the arrival of COVID-19 to Mexico, the community of Ciudad Juarez was suddenly faced with the total shutdown of its public sector, wreaking havoc on the city's economy and social framework. Several organizations, including the Placemaking Foundation of Mexico, the Coca-Cola Foundation, the Institute for Culture (IPACULT), and the Office of Resilience in Juarez collaborated to redesign a public space in Juarez's historical downtown. After a seven-month process of monitoring and community participation, the prototype for a public space adapted to post-Covid safety guidelines was born: Cactus Patio.

The Paquimé residential complex, located on the southeastern outskirts of Ciudad Juarez, is a primary example of community action at work. After a residual space within the complex became a center for informal trash dumping and even drug activity, the neighborhood committee came together and proposed to collaborate with the Hogares Foundation, Exploratorio Urbano, Juárez Limpio A.C., and Banorte Mx, in the hopes of generating a project focused on regenerating this neglected space and transforming it into a vibrant meeting spot within the neighborhood.

"In regards to emerging spaces, we've given special attention to multi-use sport facilities. This type of recreational infrastructure is the foundation of neighborhood parks and is often a mainstay of revitalization projects. In spite of the vulnerable and precarious socio-economic environment where these projects are often placed, they often become bastions for the community and symbols of urban resilience within the public space.

The desert landscape spanning the US-Mexico border, specifically the Mexican states of Chihuahua and Sonora, and the US states of Texas, New Mexico, and Arizona has shaped the identity and culture of its human inhabitants thanks to its unique and extreme climate and ecosystem. Keeping this in mind, Nómada Laboratorio Urbano created scenic lookout points where residents could gather and learn about the landscape that shaped local culture and identity.

This interview by Mexican architect and academic Tadeo Cervantes explores the work of artist, photographer, documentarist, activist and Ciudad Juarez native Alejandra Aragon. Her hometown forms the cornerstone of her work, namely for its grim reputation as one of the femicide capitals of the world in part to the recorded killings of women from the 1990s to today. In her work, Aragon narrates different aspects of the every day lives of women living in a territory rife with violence, conflict, and struggle.

This installation, made up of pink see-saws crossing the border fence, was set up during the summer of 2019 and instantly went viral across social media thanks to the children on either side of the border who came together to symbolically topple the political and geographic barriers in one of the hemisphere's most violent zones--through play.

"In 1971, Friendship Park was created at the western coast of the US-Mexico border, a small strip of land where the United States and Mexico were separated by just a single chain-link fence to offer friends and family in San Diego and Tijuana a place to meet and spend time together. The park was a small acknowledgement of the effect of border politics on human lives; all the same, border politics made a dramatic comeback in 2009, when the US created a second fence, severely limiting access to the park. These less-than-ideal conditions led Patrick Cordelle, a bachelor's student at Cal Poly San Luis Obispo to design "La Línea Borrosa" (The Blurred Line), a combined pedestrian border crossing and shared national recreation space for the Tijuana-San Diego coastline."

In this short comic, Jaime Fernández, through his Instagram page @perrosconsueter, narrates a brief story that captures the challenges of living in Ciudad Juárez, one of the large industrial urban centers along the US-Mexico border, opposite of El Paso, Texas. The work focuses on the migratory processes that shape Ciudad Juarez and cities like it, where the sense of belonging is often lost amongst the individual and the collective. 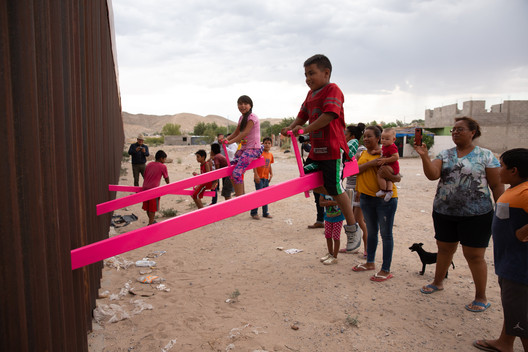