In 1971, Friendship Park was created at the western coast of the US-Mexico border, a small strip of land where the United States and Mexico were separated by just a single chain-link fence to offer friends and family in San Diego and Tijuana a place to meet and spend time together. The park was a small acknowledgement of the effect of border politics on human lives; all the same, border politics made a dramatic comeback in 2009, when the US created a second fence, severely limiting access to the park. Eight kilometers (5 miles) to the East, pedestrians wishing to cross the border are funneled alongside twenty lanes of traffic, over a bridge with high fences on either side.

Cordelle's project was inspired by the point where the border fence meets the ocean and, less than 100 meters from the land, disappears under the water. As the strong line of the border meets the line of the shore, it is conceptually weakened, making an off-shore pier the perfect design for such a shared space.

Taking formal ideas from other recent recreational piers such as White Arkitekter AB's Kastrup Sea Bath, Cordelle envisioned a spiral design, creating a defined and centralized recreational space which distinguishes itself from the United States to the North or Mexico to the South. Around the perimeter of the pier are event spaces which families separated by the border could book to meet and spend time together.

The circular form of the Spiral Pier also echoes the nearby Plaza Monumental de Tijuana, an existing 21,000 seat stadium onto which Cordelle has added a spiral ramp to the "Americas Gateway Bridge," a suspension bridge which provides one of the three access points to the Spiral Pier.

Another access point is provided by a trolley line designed by Cordelle to run along the border, from the coast and extending beyond the San Ysidro border crossing. This trolley is part of a larger masterplan devised by Cordelle to create a series of shared amenities and institutions between the US and Mexico, including a university, sports facilities, a library, a center for arts and culture, a market, and a nature preserve, all connected by the spine of the trolley route. The final access point to the pier is provided by a pedestrian bridge running above the end of the trolley line.

Finally, supported by the Western pylon of the Americas Gateway Bridge is a viewing platform, "giving visitors a new aerial perspective on the  border region" in order to "provides the opportunity to reflect on current immigration policies and the people that it impacts."

Cordelle's vision is certainly an optimistic one; his design aims to break down the incredibly simple existing condition of the border - an impenetrable line - and blur it to create spaces which are functionally, conceptually, and even economically as complex as the effect which the border has on the people that live with it. Whether US-Mexican relations will ever be in a position to allow such a progressive ideal is, sadly, another question. 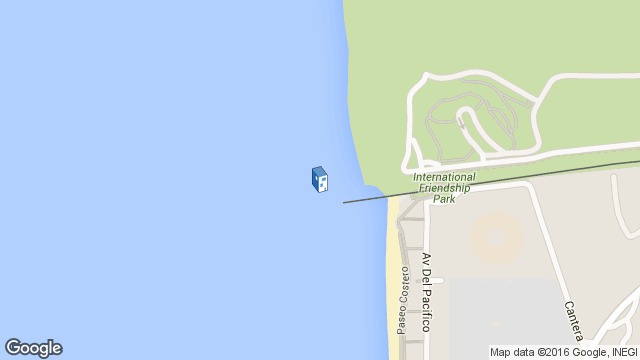