ACF has released a new series of images demonstrating the recently completed TAG Art Museum, designed by Ateliers Jean Nouvel, as part of the Artists’ Garden project collaborated with Shandong International Coastal Cultural Industry. The museum is located in the West Sea Bay in Qingdao, China. Strung along a covered promenade that weaves through planted gardens and woodland, running along the coastline towards a new marina, the structures consist of 12 interconnected exhibition halls.

According to the description by the architects, “the protected walkway features a graffitied ceiling raised on tapered concrete supports. It will branch off, leading deeper into the woodland in one direction and extending towards the artists' studios and museum entrance in another.” During winter, the walkway will be protected from the elements by retractable transparent curtains, reflecting the scenery of ocean and sky when the weather is clear. Visualisations also show a tower with hatch-like shutters that open out from spacious studios to allow occupants to appreciate the scenery.

The art gallery’s curtain wall uses a large area of anodized aluminum panels, and the facade of the building glows with a metallic luster under the sunlight. The flat facade of the building reflects the gradation of the sky at dusk. The material of the museum is switched between transparency and substance, environment and space are juxtaposed between virtual and reality, and architecture and nature blend between mountains and seas. 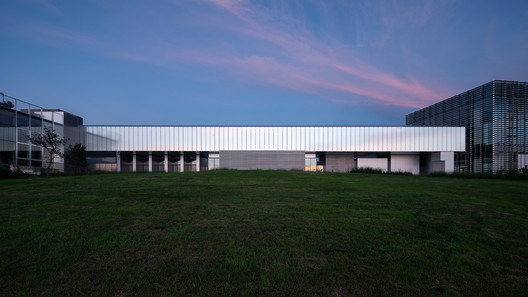