Save
Architecture of Transitions: BAAG's Installation for the 2021 Venice Biennale
Share
Or
Copy 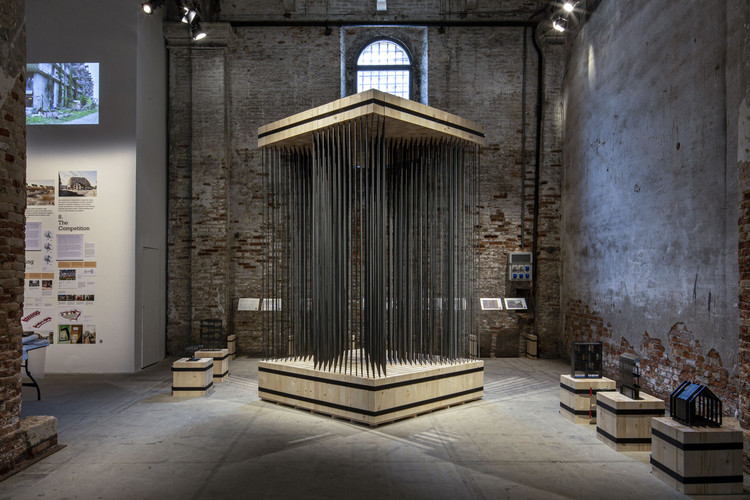 Can architecture foster better relationships between people, creating an equalized and respectful use of space? Can tools be designed that strengthen the bonds between humans and objects? BAAG (Buenos Aires Arquitectura Grupal) studio explores the architectural elements that mediate between people and objects, the natural and artificial, public and private, individual and collective, and humans and other living things.

Titled “The Architecture of Transitions,” the studio's project for the 17th Venice Biennale of Architecture is a part of the "New Homes" exhibit in the international pavilion in the Arsenale. The project's development means a review of the studio's own work and an analysis of their past research into how and with what their projects were built as well as a study of their conversations around material relationships and the varying degrees of connections that they facilitate.

BAAG focuses on architecture as a way to create connections between the elements that inhabit it. Within these connections, BAAG aims to work as an mediator, always asking: how to buildings negotiate the spaces they inhabit? Who are these negotiations between? Within these spaces that separate the different elements, BAAG highlights the transitions at play that allow us to imagine new agreements between elements. Here, people come together, distance themselves, reunite, separate, connect, or disconnect. The envelopes of the many buildings designed by BAAG exemplify this type of architecture, where spatial qualities determine social relationships. They define the degree of distance between beings and objects and can be programmatically indeterminate and open to new forms of living and use.

From the local Argentine context, BAAG investigates how building envelopes are constructed, namely, the materials used, their origins, availability, and impact on local identity, in an attempt to illustrate how local systems of production function, as well as the people and policies involved. In researching the materials they use and their relationship with the territory and history, BAAG is able to render a clearer picture of the impact of using these resources. By identifying the traceability of each material, new areas of research are discovered. The conditions of the material is connected to the area, the economy, and the socio-political structure. Studying these sparks answers that allow resources to be managed in an environmentally responsible way while also considering the social tendencies that demand the reformulation of current production processes.

Finally, BAAG aims to investigate how we can generate innovative technologies with the materials available to us, creating new ways of working through local knowledge and techniques. The ultimate goal is to highlight the elemental and obvious in traditional construction, reinforce it through experimentation, improvisation, and engineering, and render new forms of construction.

The installation recreates the unspecified zones within house's envelopes and attempts to create transitional spaces, where materials, proportions, openings, and everything within them come together. The principal materials used are wood and iron, two of Argentina's most readily available resources and widely used in the country's architecture. Four hundred wooden blocks support a series of iron bars that generate a space filled different grades of closeness and visual contact, creating a network of transition. The installation is an exploration of these spaces and the connections they create.

With five models of the envelopes for their projects Aráoz, Casa Scout, Casa Rodney, Juana Azurduy, and Una Casa, BAAG seeks to illustrate a material exploration of borders and transitions, experimenting with how materials impact a space and how a space generates relationships and connections. Each relationship is created through spatial exploration that promote encounters and gatherings. BAAG aims to rethink ways of inhabiting and building houses, ultimately promoting stronger connections between all that inhabit them.

A green cover encases the building destined to be the meeting space for a Scouts troop. All of the vegetation--climbing vines, bushes, and flowers--grows from planters located on every floor, as well in the garden and the walkway.

The principal material in the building's envelope is a metallic mesh formed from welded iron bars, which support the vegetation and also act as solar filters, controlling the interior lighting and fomenting different conditions within the space. This collapsible mesh can serve as a screen for the exterior and, in a moment, transform into a pergola for the terrace. This covering functions as the barrier between the interior and exterior, as well as the living space for both human and non-human residents of the house.

Juana Azurduy 1635 is a multi-family residential building composed of two four-story blocks separated by a courtyard. It is located in a block in Nuñez - a residential neighborhood of low building height. Its particularity is having half of its surface dedicated to a municipal school, populated by old banana trees and ash trees. The building looks for an urban response, understanding the party wall bordering the school as a façade, and not as a "blind" wall.

The building explores the possibilities of the solid brick with projected horizontal 90 cm high "sashes" that serve as railings, parasols and screens. These belts run through the four faces of the blocks, forming moments of blind walls and moments of sieving screens, calibrating and accentuating the visuals. Each balcony, terrace and window has a singular spatiality, generating double heights, expansions with parasols, screens that give privacy, as well as framed visuals, singularities that favor the appropriation of those who inhabit it.

The project is resolved with two systems. The first corresponds to a series of light vaults that are supported by Y-shaped reinforced concrete beams, designed to support the curvatures of the vaults. The modulation of the vaults delimits the rooms. The bedroom is located in the first vault next to an inner water courtyard. The next two vaults make up the living room and kitchen space in direct relation to the garden and access. Consecutively there are two vaults that make up the gallery space, where the roof is dematerialized to achieve differentiated shadows and filters.

The project seeks to mediate the spaces in their different scales. A series of brick walls configure the access, these generate a route that, accompanied by the existing lime trees, allows a gradual entrance by acting as transition elements. From the interior, the baseboards, the walls and the sequences of the vaults compose and configure the spaces, providing different degrees of use and privacy.

The house was designed as a part of an investigation into industrialized housing and new ways of habitation. This resulted in the creation of, not only a house, but a system that could adapt to multiple situations. This system consisted of modular rooms that could create a variety of spatial arrangements, all of which were illustrated in a catalogue. Each modular piece could be arranged according to the requirements for each living space.

The project also included a study on the traceability of the materials and the carbon footprint created by their production processes. This prompted the creators to source from certified tree plantation in order to work with only sustainable lumber. Furthermore, the light weight pieces' were easily transported and used up little space.

Aráoz is a residential building located in Villa Crespo, a low density area with a strong neighborhood character. In keeping with its surroundings, the building seeks to promote human contact and connection between neighbors. The existence of a patio between the two blocks generates cross ventilation and visual continuity. The private sector of the unit is linked to the external ones. The kitchens and the accesses of the units look towards the patio, suggesting a space where it is possible to be seen and from where you can look, greet and interact.

The building's outer wall consists of contained balconies, brick, and narrow vertical windows. These alternating elements reflect the rhythm and variation of the city. The lower level of the building features a space marked “DISPONIBLE” that serves as an extension for BAAG studio and acts as a space for exhibitions, events, and presentations. During these activities, the space opens up, completely connecting with the city and becoming a meeting place for residents.

BAAG, Buenos Aires Arquitectura Grupal, is an architectural studio that aims to support the discipline and to understand architecture as a practice, ultimately producing, questioning, researching, and innovating within the spirit of collective work and effort. The studio is directed by Griselda Balian, Gabriel Monteleone, and Gastón Noriega, all architects who serve on the faculty at the School of Architecture and Urban Design of the University de Buenos Aires. The group spirit of the studio allows them to collaborate with other architects and professionals from other disciplines, taking part in experimental works, contests, and debates while always seeking to maintain a critical eye.