Save
A Brief History of Automation in Architecture
Share
Or
Copy

Efficiency in the construction site by reducing waste and lowering costs, improving safety through better planning, and introducing machines to assist in the construction and design process. These benefits can be achieved through automation in architecture, but for technology to reach this point of empowering and supporting creativity while also improving efficiency, we have come a long way. To understand how automation developed and the prospects it offers for architecture, here is a brief timeline.

The history of building automation started back in 1883 when Warren Johnson invented the thermostat. This component is used to sense and regulate the temperature of a physical system, and back then, it was a simple device that responded to falling temperature by activating a light in the boiler room, indicating when janitors should shovel more coal into the furnace to maintain heat in the building.

Mechanization in architecture, however, was introduced through the Modern Movement. Modern architecture embraced functionalism and mass-production and has had a major influence on the way we think about technology in architecture to this day. With the effects of the Marshall Plan and economic stability in the post-war context, construction was boosted by developmentalism and housing policies, which resulted in an increasing number of buildings with automation systems, most notably the Seagram Building, built in 1958. At the same time, futuristic avant-garde groups such as ArchiGram and the Japanese Metabolists started to emerge with their proposals envisioning different ways to experience life and the built environment through the possibilities of technology applied to architecture.

Up until the 1970s and 1980s, almost all controls (thermostats and valves) and even central control stations for large commercial buildings continued to be hydraulic and pneumatic, but automated control systems improved over the years and began to be revised with the advent of digital computers. At the same time, cybernetic theories were introduced, and soon, the paradoxical concept of "Smart Buildings" emerged in the United States, which meant buildings with any kind of automated management and control system - a distinguishing feature at the time, as technology played a key role in marketing and sales by creating falsely futuristic images of buildings with computerized systems. In this context, building sensors gained popularity for being able to identify and react to heat, smoke, light intensity, etc. At this point, these mechanisms were still based on actions programmed by man, in other words, a system that is not yet capable of learning from the events.

As technology continued to improve, the concept of Smart Buildings started to also focus on the design process, construction techniques, components, and environmental issues. BIM has become more sophisticated, allowing for more practical and affordable designs and a more intelligent construction site.

By the late 1980s, the central computer began to give way to individual devices that would communicate back to the central system, and by 1995, with the growing popularity of the internet, the central control automation hardware has given way to cloud-based software operated from any web-linked computer. With inexpensive local controllers with internet connectivity, it became possible to report large amounts of data to central software in the cloud, containing valuable information that the system can use to evaluate and improve itself. This way, issues related to comfort and waste of materials and energy are resolved, leading to a more efficient operation of complex building systems.

With the combination of artificial intelligence and processes of digitalization and automation in architecture, the industry is now seeing rapid innovation while also enabling more possibilities and more creativity in architectural design. Computational and generative design tools can be used to automate routine tasks, optimize rapidly, and also create highly complex designs. But the most dynamic development is perhaps the digitalization of construction, which has become safer and more creative while also improving efficiency.

Looking forward, we can certainly expect to see more systems in which the digital tools are starting to contact the physical world so that we can confirm that the design in the computer can actually be printed or fabricated in the real world. Using digital design and fabrication technologies, this potential is already becoming a reality. For example, researchers from the Block Research Group at the ETH Zurich were able to calculate and construct a self-supporting shell structure using the minimal necessary material, resulting in an ultra-thin, sinuous concrete roof system with an average thickness of just 5 centimeters. Another group that stands out in this field is the ICD/ITKE University of Stuttgart, with many types of research and constructions that indicate the growing influence of robotics in architecture, as seen in their latest project, the Maison Fibre, showcased at this year's Venice Architecture Biennale.

Adopting digital approaches in architecture will likely lead to more innovation and an even more dynamic field. Automation has slowly made its way into architecture and construction, and from now on, this collaboration can lead to novel strategies, as well as help revisit vernacular solutions, to improve the built environment. What we are seeing is actually a new era of architecture, where absolute precision becomes the norm, allowing us to efficiently build almost everything we can imagine. 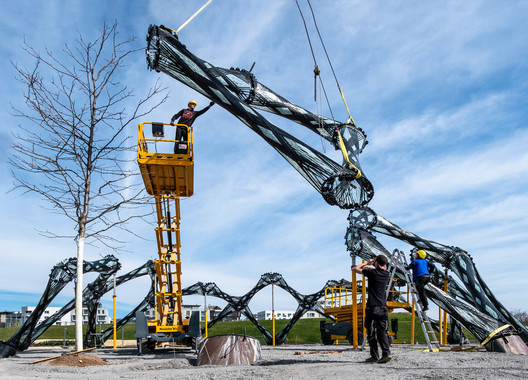