Completed in 2020, amidst the pandemic, ANOHA- The Children’s World designed by Olson Kundig for the Jewish Museum in Berlin is finally opening its doors to the young public. The design reinterprets the myth of Noah’s Ark and furthers the concept and ideas of a similar installation at Skirball Cultural Center in Los Angeles, created by the firm then named Olson Sundberg Kundig Allen. More than a museum experience, the project is a space for community building, a place for imagination and play that enacts a universal story, creating an inclusive environment for children and families of all cultures and backgrounds. 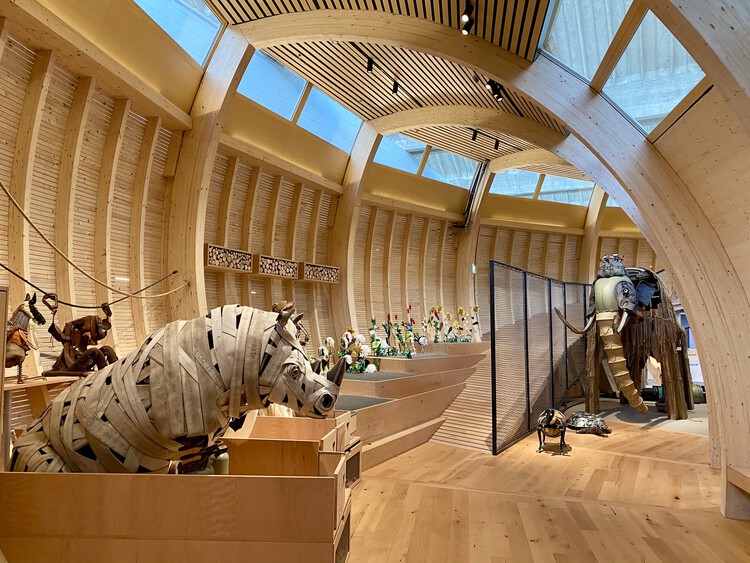 Despite the museum’s emotional weight, there was a desire to create a children-focused programme for which the Jewish Museum Berlin organized a design competition in 2016. Inspired by Germany’s acceptance at that time of 1 million refugees, Olson Kundig winning design envisioned the new museum experience as an inclusive environment for children of all religious and ethnic backgrounds that would forge connections through imagination and play. The project re-iterates the flood myth and re-imagines the ark, together with its plethora of animals, while also opening conversations around climate change, recycling and adaptive reuse.

There are hundreds of flood myths from cultures all over the world, and most predate the Old Testament by thousands of years. This story of destruction and creation—of adaptation to a rapidly changing climate situation—is universal. Everyone, everywhere, can relate to those concerns, just as everyone can be inspired to be part of the solution.” –Alan Maskin, Design Principal

Placed within a former flower market hall opposite Libeskind’s Jewish Museum, the design features a circular wooden ark 7 meters tall and 28 meters in diameter, whose shape is inspired by both ancient Sumerian texts describing a circular ark and the space station in Stanley Kubrick’s film 2001: A Space Odyssey. The design and its materiality create a dialogue with the existing Brutalist concrete structure.

A traditional ark is directional, with a distinct front and back and a rudder to guide exploration. The circular modern ark has no back or front; instead it is democratic and unbiased.” –Alan Maskin, Design Principal

The space is populated by 150 cultural animals, created from found objects by 18 German artists. The tactile sculptures teach children about the importance of material recycling while also nurturing a sense of discovery, as visitors recognize the familiar materials. The project incorporates several sustainable strategies, such as natural ventilation and a passive daylight approach. Extensive mechanical systems are eliminated thanks to the environmental buffer of the existing hall.