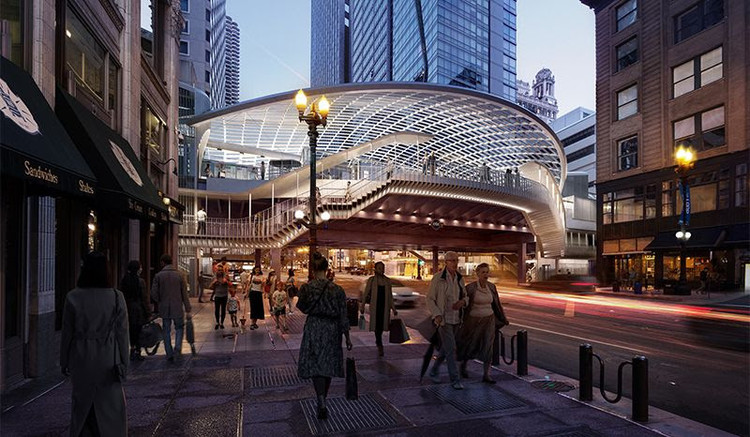 The station is located at a vital junction within the Chicago Loop, serving six of Chicago’s eight train lines, with connections to adjacent pedestrian and bus routes. Improvements made to the station's structural design will remove obstructive columns and offer safety to pedestrians and vehicle traffic along the main street. The enhancements done at street-level include lighting upgrades, wider street corners, an improved pedestrian crossing, and an accessible connection to the plaza towards the north.

Although the design is led by SOM and TranSystems, but a diverse local consultant team and input from neighboring property owners and civic organizations also took part of the creative process. The station is one of the most visible in the CTA network, so the team wanted the design to reflect its importance as a location and compliment the needs of riders.

The glass canopy is designed with a bird-friendly pattern that provides shading in the summer and protection from harsh winds in the winter, all while diffusing natural daylight into the station. The transparency of the canopy reflects Chicago’s architectural history, such as bascule bridges and early skyscrapers. The structure is also highly efficient, as it minimizes visual and spatial obstructions to provide uninterrupted views of the historical buildings and architectural landmarks that sit alongside the State Street alley. To establish a connection between the past and present, materials from the existing station were integrated into the design along with other educational elements.

A new glass and metal-clad bridge on the western end of the station was implemented to provide riders with a fully-accessible circulation from street to platform. Platforms were widened and additional exits were implemented as well to accommodate more passengers and improve comfort and safety throughout the station.

In addition to the Chicago renovation project, SOM have recently completed the transformation of the Willis Tower observation deck, a platform that inaugurates a new interactive exhibition and showcases how architecture shaped Chicago’s identity through the city’s history. The City of Chicago has also selected SOM and TnS Studio to design an incubator for small businesses and entrepreneurs in the city’s Englewood neighborhood, called Englewood Connect, which aims to foster local commerce and greater connectivity, as well as create new, flexible public spaces. 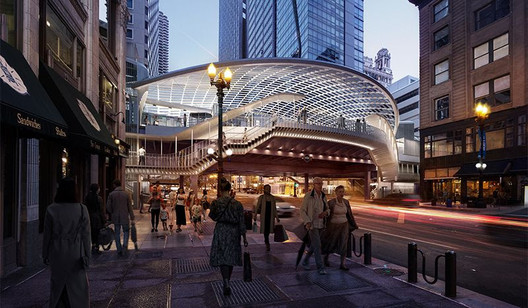