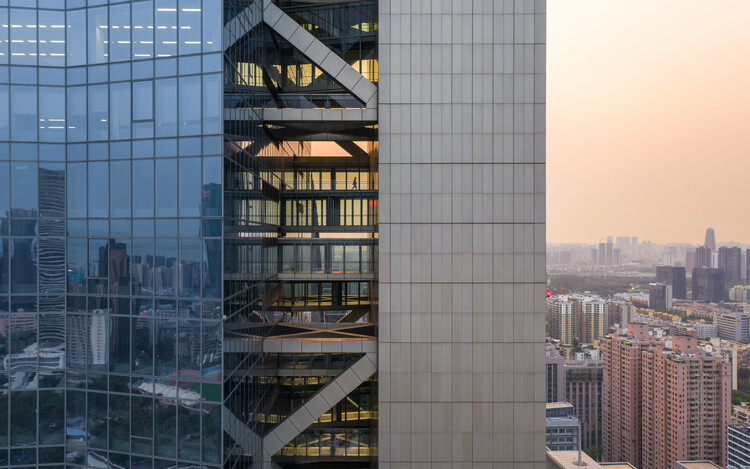 Located near Shenzen University, the Hanking Centre comprises a 65-storey office tower and a low-rise podium with angled facades dedicated to retail. Intended as an incubator for the city's high-tech industrial sector, the tower's design prioritizes the flexibility and adaptability of interior spaces in order to meet the evolving spatial requirements of workspaces. The spatial configuration minimizes the building's structural footprint while creating a gradual transition between public and private spaces within the structure. In addition, the open floor plates allow for better access to daylight, creating a healthier work environment. The tower also features two secondary cores for fright and VIP elevators, which provide additional structural reinforcement.

As a typology, skyscrapers tend to emphasize shape as the primary differentiator. Instead, we focused on lived experience within the city. The delamination between the circulation core and the office spaces within the tower generates a threshold, an intensification of the urban landscape as part of the day-to-day. - Pritzker Prize-winning architect and Morphosis Founding Partner Thom Mayne

Folds within the façade articulate the tower and the retail plinth into one sculptural volume. The project expands the public space along Shennan Boulevard, a major artery connecting Shenzen's neighbourhoods, with a landscaped public plaza. The latter is meant to create a new neighbourhood landmark and enhance activity at the street level.