Save
Brutalism in European Schools and Universities, Photographed by Stefano Perego
Share
Or
Copy

Similar to other forms of architecture, educational buildings--even though tied to certain socioeconomic and political factors--are influenced by the architectural styles of their respective time periods. Combine this with their propensity for monumentality, educational institutions the world over have turned to Brutalism to define their aesthetic and highlight their "institutionalism." In keeping with Brutalist tradition, reinforced concrete is the building material of choice, lending all manner of shapes and textures to these centers for learning.

Along with his work for the articles Brutalism and Collective Living in Europe and Europe's Brutalist Churches and Chapels, photographer Stefano Perego has also covered Brutalism as seen in educational institutions, including universities, primary and secondary schools, institutes, lyceums, and university libraries. In this article, we highlight some of these institutions from throughout Europe, namely Germany, Belgium, Italy, France, the Netherlands, and Switzerland, and the people behind them, including architects Gerd Hänska, Rolf Gutbrod, Enrico Castiglioni, Hermann Fehling, Daniel Gogel, Christoph Parade, Brigitte Parade, Walter Schrempf, Georges Adilon, Guido Canella, Michele Achilli, Daniele Brigidini, and Johannes Van den Broek, among others: 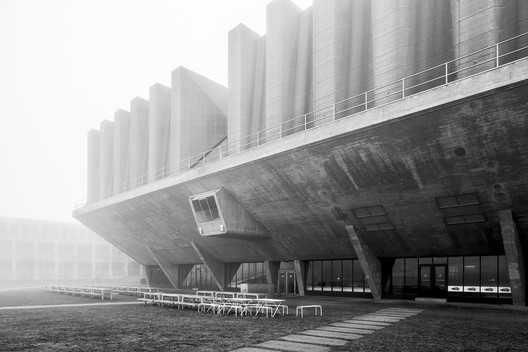