Japanese studio Sou Fujimoto Architects alongside Chinese office Donghua Chen Studio have designed a large scale exhibition complex in the heart of Futian District. The Shenzhen Reform and Opening-up Exhibition Hall adopts the city's characteristics as a contemporary entrepreneurial hub, welcoming innovative international businesses in a garden-inspired structure wrapped with white perforated facades. The design proposal was the winning entry of an international competition in Futian, and will be a part of the Shenzhen Ten Cultural Facilities of New Era promoted by the Municipal Government, once completed. 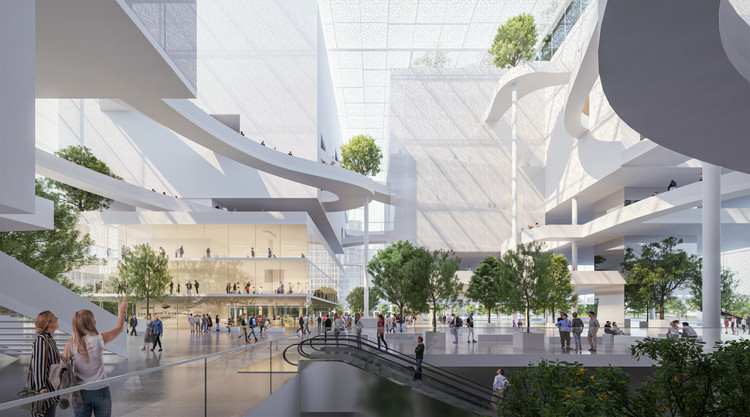 The 90,000 sqm project is located in the urban core of Shenzhen, sitting on the right side of an ecological axis and in the middle of Xiangmihu area. The purpose behind the project is to display and publicize the "achievement of reform and opening-up" through an open welcoming site. The exhibition hall is set to be an institution that collects evidence and research materials, all while an innovative modernization of the city, highlighting Shenzhen's public culture and urban civilization.

The design concept of the project emphasized the relationship between architecture, landscape, and the surrounding context. The interior represents a "village-like" environment, with several green spaces and unobstructed all-white platforms visually connected to one other. Although the platforms and structures in the interior are rather geometric and cubicle, the connecting pathways break the linearity of the space with curvilinear passages.

The architects went behind “gardens within a box” for their design scheme, taking advantage of the natural sunlight and surrounding landscape. To animate the interior and create a sense of transparency between the outdoors and indoors, the architects wrapped the interior space with a perforated layered facade. The openness and transparency of the building also translate "reform and opening-up", two themes intended by the architects.

Several projects are on the horizon for Sou Fujimoto architects. Early this year, they have unveiled their design for the top part of the tallest skyscraper in Japan “Torch Tower” in Tokyo, collaborating with Mitsubishi Jisho Sekkei, Inc. The project will include offices, commercial facilities, hotels, as well as public spaces. In addition, the city of Haikou revealed a pavilion designed by the Japanese architecture firm. The ribbon-like white pavilion will have an accessible roof, and will be one of the first public waterfront interventions to be completed in the spring of 2021. 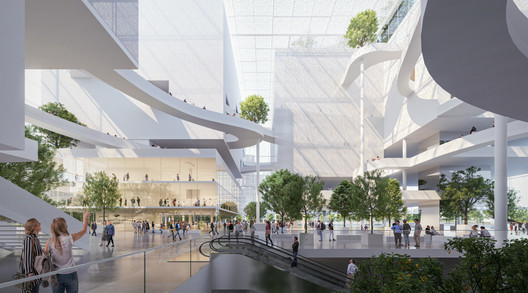