Scheduled for completion in 2028, Torch Tower was revealed on Sou Fujimoto’s Instagram account. Located in Chiyoda ward, Tokyo, the project will put in place offices, commercial facilities, hotels, as well as public spaces. Implemented in the area of ​​the Marunouchi Reconstruction NEXT stage, named TOKYO TORCH, which extends to the north of Tokyo Station, the project is aligned with the town’s vision to "brighten and energize Japan", transcending generations and national borders.

With the concept of "Happiness and health building that connects the city to the future", the new addition of 63 floors above ground, generates a new typology of highrises. In fact, at around the height of 300m, Sou Fujimoto and Mitsubishi Jisho Sekkei, Inc. have imagined a large semi-outdoor Hill-like-Plaza in the middle of the structure, creating “a Place for People”. Instead of limiting itself to “an object”, the intervention aims to introduce a super highrise 390m complex building for people, in the skyline of Tokyo.

The lower part of the building takes on halls, aerial walkways or terraces, underground pedestrian spaces directly connected to Tokyo Station, and hydrophilic spaces along the Nihonbashi River, centered on a large-scale plaza. Designing the upper part, Sou Fujimoto reinterprets the traditional square usually present on the ground floor, seeking to shift from standards know-hows and cutting the homogenous verticality of a tower. In addition to the plaza at 300m, the crown of the tower encompasses an office with a sky lobby, a "hill in the sky", a hotel, and an observation facility. 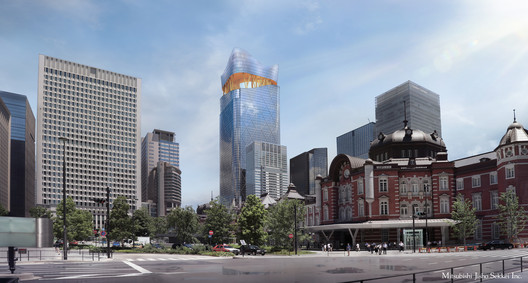