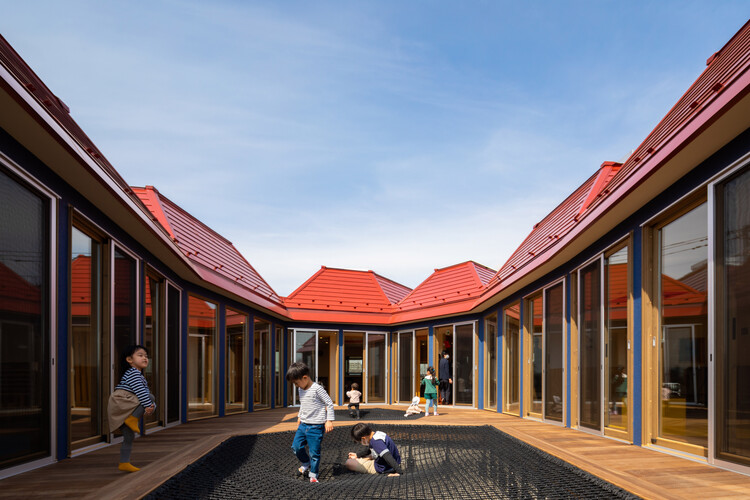 A Place for Early Childhood Education in an Information Society

In an information society, the way we work continues to change dramatically. Rather than continuing to work in the same job or occupation from the time you start until retirement, as was the case before the information society, there is now a need to change your job function and collaborate with people from different fields (to co-create) in order to realize something. In such an age, we believe that we need places that affirm diversity starting in early childhood, places where children can experience spending time with a diverse array of people.

One of the abilities needed in an information society is spatial awareness. It is believed to be possible to train the body and brain at the same time in places where the body is unstable due to a complex environment, such as multi-dimensional forests and mountains, where it is difficult to comprehend the entire space by sight alone. A space is an area where you can affect change on the other people there. If a space that affirms diversity is created, the people in that space will affirm diversity. And if a space that encourages movement in unstable environments is created, people will naturally develop greater spatial. In this nursery school, we hope to give children the opportunity to gain the experience and mindset needed in an information society.

1. A Scattered but Shared Space

This is a self-contained polygonal space where children can enjoy various activities together. In an information society, people with different skills need to think together in the same place. Rather than everyone doing the same thing, we need to be able to share the same space while developing individually. Since a polygonal space does not have an obvious center, there are many different areas in the space. Because of this, people can engage in different activities while sharing the same space.

3. Thinking with the Body Daily

There are very few flat areas in the playground, which is filled with uneven surfaces and soft mesh nets, making it a three-dimensional space that requires the use of the whole body to play. One ability needed in the information society is spatial awareness, which is said to be trained by using the brain and body simultaneously in three-dimensional spaces. Cities are full of flat planes because of the development of roads to be conducive to wheels. But by increasing the number of three-dimensional spaces in the everyday life of a nursery school, we hope that children can develop the spatial awareness skills needed in an information society, which cannot be easily obtained in the city.

4. An Environment where You Make the Rules

In the schoolyard, there are only mountains, sand, and water. There is no set solution in every situation. In this simple environment, children can work together to come up with their own rules and play.

The colors used in this space are as uncoordinated as possible. Our goal is to create a space where people can recognize and accept diverse personalities, where just by being there, they can feel that it is OK to be different.

6. A Place where Traces Remain

We have created a place where the traces of play can be found. There is a sandbox at the entrance of the nursery school. As one child plays, traces of their play are left behind, and as another child plays, the sandbox changes even more. By the time parents come to pick up their children in the evening, the sandbox is filled with the traces of various children who have been playing throughout the day.

7. The Face of the Nursery School

This nursery school is located in a typical new residential area, with the majority of the surrounding buildings designed by housebuilders of around the same age. In order to create a building that is consistent with the architectural form of the surrounding buildings, we adopted a hip roof design, and the scale of the windows was designed to align with those in surrounding buildings. We designed the hip roof as a collection of multiple roofs rather than a single one in order to express the idea of multiple people consulting with one another and thinking together, rather than a single person thinking alone. The structure is designed to echo people discussing together in a circle around the inner The exterior wall has distinctive windows. By making the windows protrude outward, we can make the outside world seem a little more mysterious. The roofs also have skylights that let lots of natural light into the space. 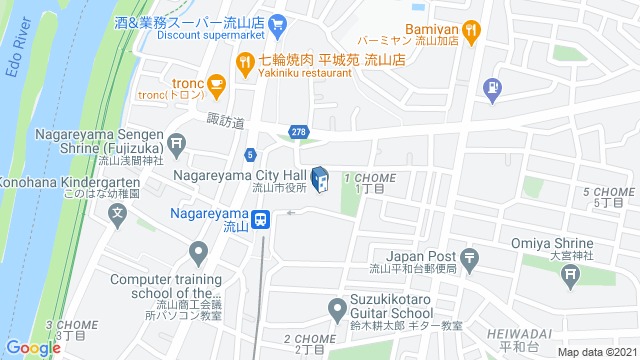 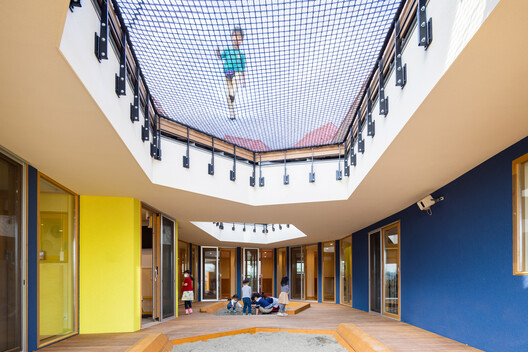 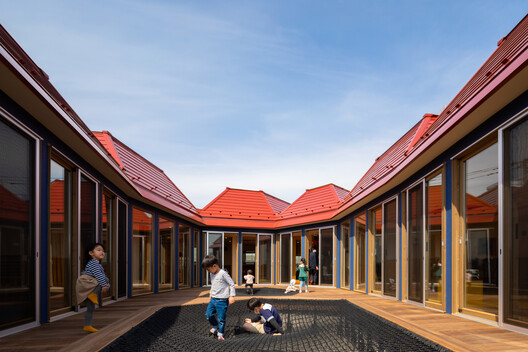