Chilean architects Ricardo Azócar and Carolina Catrón founded their architectural and urban planning firm in Concepción, Chile in 2015. In a short time afterward, their project “Two Towers and a Trail” was awarded the Obra Revelación del CA-CCP Prize in 2016 and was recognized in the Young Architects of Latin America Collateral Event at the Bienal of Venice in 2018; their monographic text “Catalejo” won first place out of the Publications category at the 2018 Biennale of Costa Rica. In November 2020, ArchDaily recognized them among the best emerging architectural practices of the year.

We sat down with Azócar and Catrón to discuss their current interests and motivations, their collaborative processes, their career trajectory, their upcoming projects, and their predictions about the future of architecture in their native Chile.

Fabián Dejtiar (FD): You both focus on areas with a lot of natural elements but that are often undervalued and ignored by the community. What drew you to working within these areas?

Azócar Catrón (AC): The public facet of architecture has always interested us, whether talking about buildings or public spaces and it was this focus that gave us our start in launching our first project “Two Towers and a Trail” fpr a contest where our goal was to transform a place that, during our childhood, was a place to play and explore but had been transformed into a communal garbage dump.

This place, the Humedal Boca Maule, was one of the few green areas within the Coronel Commune, a community designated as one of five "Environmental Sacrifice Zones" within Chile along with Quintero-Puchuncaví, Huasco, Mejillones, and Tocopilla. In spite of its importance as a communal green space, this wasn't enough to keep it healthy since the very community that used it was also destroying it.

After launching this initial project, we started realizing an overarching need within the cities and residential areas of our territory that, thanks to their growth and influx of residents, were losing their green areas within the chaos of rapid urbanization and the expanding housing market even though these same spaces have the potential of adding to the quality of life of residents.

For this reason, the space that we don't build on in our projects is our principal focus, for it is the stage that displays them. For us, it's not the scale of the project, but the scale of the landscape surrounding it, which gives us a wide space in which to operate and serves as a common element for other disciplines.

FD: I understand that your motivation comes from creating new public spaces that must be done in little time and with limited resources, forcing you to bring different social entities into your work. What is your process? How do you achieve your goal?

AC: First, it's important to mention that, in most of our work, there are neither clients nor directors since most of these urban spaces belong to both everybody and nobody at the same time, meaning that they receive no investment or maintenance that makes them accessible and usable for the community; however, there are funds and grants available that organizations can apply for in order to revitalize these areas. In this context, is possible to build collaborative relationships and offer support, starting with our own profession, in adding value to these places.

Within these partnerships, the processes are collaborative and extend from the office to neighborhoods and public organizations with the goal of getting proposals on the table that call attention to a community's needs. From there, we design the project.

In response to these needs, we implement punctual and cost-effective measures that operate under a limited budget and are easy to fabricate and install since it is often members of the community that are working to put together the installations.

In any case, in spite of the restrictions of each task, there is constant work surrounding development and being measured  and clear in how we implement our ideas but at the same time giving ourselves space and flexibility in trying new methods and working with other formats in the future.

For now, these projects aim to demonstrate the idea that a series of changes have the power to transform a place into a consolidated public space. Understanding these works as an initial stepping stone that facilitate future projects is essential when working within a public space.

FD: "Catalejo", the publication that you both wrote about the hills in Concepcion's historical downtown centers on "an open question about the language of projects." Can you tell us a little about this?

AC: As we mentioned before, for us, it's not about the scale of the project, but rather the scale of the landscape surrounding it. For this reason, we created “Catalejo," a bibliographic project where we lay out a plan to unify five hills within the city of Concepción in order to give an overall look at these spaces that, for many people, appear isolated.

For this project, we laid out a circular route whose perimeter unifies these hills at a single point. Additionally, for each hill, we imagined a multi-use and open-space pavilion that connects to look-out points and other communal areas depending on the layout of each hill.

This publication aims to highlight the role of landscape and outdoor space as seen in works of architecture. This is what motivates us; this open question in the language of a project. It asks us whether it needs more at that moment, or merely proposing a series of goals for the future is enough.

In this publication, more than emphasizing architectural proposals, we want to highlight the importance of hills as natural green areas and therefore, as prime public spaces.

FD: From Chile, your work has gained recognition in many parts of the world - the project "Two Towers and a Trail" has been selected in the collateral event Young Architects from Latin America in the 2018 Biennale of Venice and, in November 2020, ArchDaily named you among the best emerging architectural firms of the year. What kind of value do you see in this? What opportunities does it allow you currently?

AC: Both recognitions are very surprising and exciting because they put us within a group of architects under 40 who are doing very powerful work both within Latin America and beyond like in the Biennale of Venice and in ArchDaily. It's an opportunity to have a global reach with a new form of architecture that takes on many different scales.

In that sense, it's also reinforced what we're trying to do in our work, to generate interest in looking for alternative ways of creating architecture by experimenting with different formats and scales. More than serving as formal recognition for our work, or for a particular project, we hope that it brings recognition to the modern needs of our cities and helps people realize that it large financial investments are not the only means for revitalizing neglected urban green spaces. In many cases, small, community based actions make all the difference in bringing value back to these public areas.

FD: What plans do you have now in regards to your practice? What ideas do you have about the future of architecture in Chile?

AC: Our medium to long term plans are to take our work beyond the Biobío region, especially to more isolated territories where public spaces receive even less attention and investment.

In the short term, our constant challenge is materializing our proposals. For this year, we're hoping to bring several projects to fruition that, because of the pandemic, have been put on hold. Additionally, we're hoping to participate in contests more frequently, since this is what challenges us to explore other scales and types of projects that, even though they differ from the work we normally do, they are interesting all the same.

With regards to the future of architecture in Chile, from our point of view, we hope that all of the knowledge accumulated and propagated by the architects who have been at work since the 90s and who have inspired and shaped us, will be applied to more mainstream projects and will inspire interest from the general public. 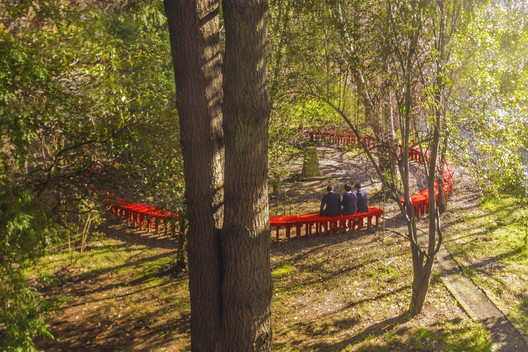