Save
What Happens When Building Codes Rule Design?
Share
Or
Copy

The rise of these buildings isn’t the only instance where building code has greatly influenced the design of architecture. Codes and zoning have had a heavy hand in influencing aesthetics around the world- the stepped nature of buildings from the Art Deco era in New York City, the distinguished Mansard roofs of Paris, the facade designs in parts of Italy, and the evolving restrictions have made skyscrapers taller ad slimmer than ever before.

So what causes this? At least in the United States, code often shapes architecture through the International Building Code (IBC) which lays out the rules that have caused mid-rise structures to become both cheaper to build and faster to construct- a big plus for owners and investors. It’s made possible through the use of cast concrete or fireproofed steel of either one or two stories that compose the podium, and often times house the retail, parking, or dining programmatic elements. On top, a wood frame, treated with fire suppression materials, sprinklers, and standard-rated floor and wall separations, become the residential units which are often limited by five stories- dubbing it the five over one development. These buildings have the ability to go from razed land to fully completed in extraordinarily short periods of time, causing an increase in their popularity no matter which American city you live in. While they’re efficient in terms of cost and time, they tend to lack in other areas of architectural bravado. They’re now being called out for their homogenous nature, with many questioning why this trend of building residential Sim City-ism endures.

Even more than the IBC Code limitations is the way that cities themselves are zoned for housing. Facing a lack of space, and driven by the multi-billion dollar industry of the apartment market, cities zone with the goal of creating an overwhelming amount of single-family homes on the outskirts, and multiple story buildings for the more dense and downtown areas. Ideally, when a design is proposed, the process allows review boards to work collaboratively with developers and architects, providing a level of refinement and better situating them within their local context. But the reality is that oftentimes, there’s a tendency to quickly approve past projects that have already proven to work- which means buildings that are pseudo-duplicated to meet tight budget restraints and timeline crunches.

Hey arch/design Twitter, I have a question about terminology. Do you have a term for the new generation of generic urban apartment buildings? You may know it when you see it: boxy, basic, cheap facade, seemingly value-engineered. Here's some that may fit into this category. pic.twitter.com/H374po4YZg

Architecture is not rewarded on aesthetics alone, but the challenge is to find a way to make these buildings that respond to a need for housing match their local context in a way that feels less like a recursive copy and paste, and more original. It’s not the job of architects to change building codes, but to find ways to design creatively and effectively within their constraints- and this means reinventing these “blandmarks”. 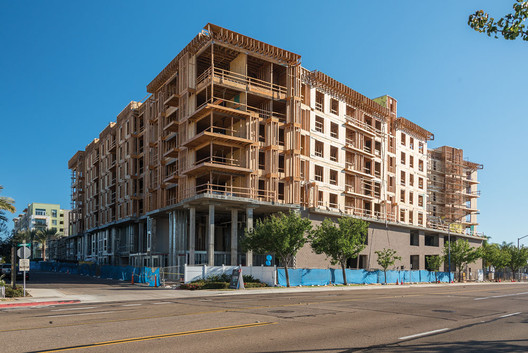