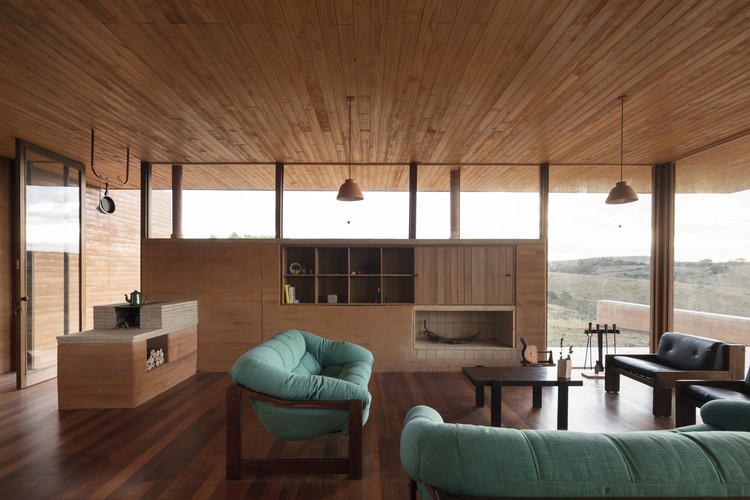 Ancestral, but overshadowed by other technologies that have emerged over time, the rammed-earth walls are again gaining prominence in Brazil for being a low-impact, sustainable and economical solution. Known in Portuguese as taipa, it is a rudimentary construction system that compresses the earth into wooden boxes until it reaches an ideal density that allows a resistant and long-lasting structure.

Among the many benefits that rammed earth provides, its raw material is abundant, enabling the use of the same soil from the construction site, and reducing, therefore, the emission of carbon dioxide since it does not need long-distance transportation. In addition, it is non-toxic and provides a healthy environment in which the wall "breathes", is fire resistant, and has excellent thermoacoustic insulation.

For example, in Arquipélago Arquitetos's House in Cunha, the main walls are made from rammed earth. Using an authentic formwork system that avoids drilling and has developed a more efficient construction site, the modular components can be easily disassembled and reassembled. In addition, the rammed earth structures are tied by a concrete strap that serves as a support for the metal structure of the roof. The juxtaposed panels are solid enough to support the entire load weight of both the beam and roof.

Brazilian firm Argus Caruso decided to build the AA House, with rammed earth, in order to make the house breathe. Given the high humidity situation of Ubatuba, rammed earth could not be better. Employing several techniques, the foundation of the slab is in hyperadobe; the walls are built in the wattle-and-daub method and the structural wall is in rammed earth. For the architects, the top priority was to build a house with natural materials, ideally taken from the surroundings, but with a fine finish. The perfectly straight and smooth walls break the paradigm that a rammed-earth house is always crooked or badly completed.

All the soil generated by the earthmoving originated from the excavations of the foundations, can be used for the construction of rammed earth walls. In fact, this concept was used in the House in Mantiqueira, designed by Gui Paoliello in which the material was removed from the land itself and used in the foundation of three program-theme volumes (boxes) built with 30-cm thick (11.8-inches) earthen walls.

In the case of Guesthouse Paraty, designed by CRU! Architects, a 6.3-meter-long (21-feet-long) rammed red earth wall serves as soundproofing. As the site is on a slope, leveling was necessary. In this example, the raw material was also used with no extra energy required. In fact, the same formwork used for rammed earth was later applied to the roof structure.

Other features that architects seek to prioritize in the projects that adopt this ancient technique are color and texture. For example, at Estúdio OLO's Casa Bosque, the orange rammed-earth structural wall works as an element that fits the intense chromatic palette of the project, which goes from the crimson kitchen to Sérgio Rodrigues' Mole armchair in blue leather to the vibrant bookshelves at the end of the room.

The information contained in this article was taken from the architects' original descriptions.