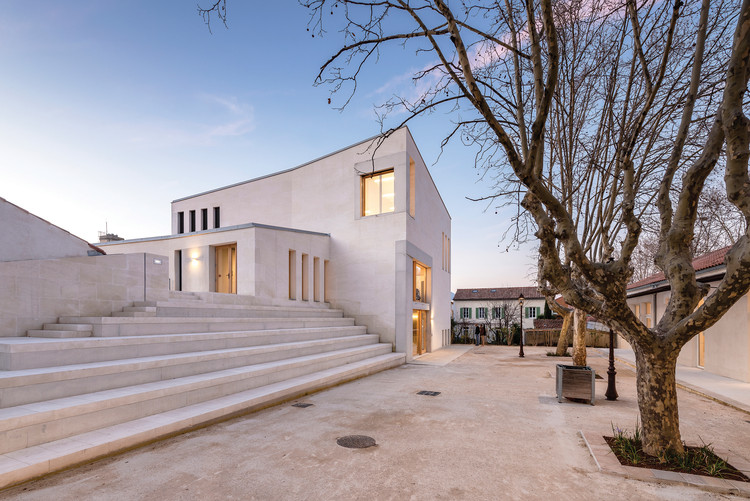 Text description provided by the architects. The Conservatory of Music is at the heart of a much broader public project.It serves as a catalyst for a refined urban lifestyle, breathing new life into the entire public pedestrian space. The use of massive stone in the construction is a striking environmental performance. With little transformation at a nearby source, it makes for a low carbon footprint.

The site proposed by the Pradet City Council is the plot of the former Jean Jaures school, comfortably nested in the historic downtown neighbourhood. This policy choice offers an alternative to the automobile-dominated lifestyle that would have otherwise dictated a location at the entrance of the city with abundant parking. The challenge of installing equipment of this scale within the residential fabric of the heart of a seaside village is a major consideration in this project. How then is architecture capable of bearing the cultural and social graft between the users hailing from the entire French metropolitan territory and the inhabitants concerned about the transformation of their environment?

The first choice is the superposition of the programme over 3 levels. Space thus freed makes it possible to keep the big trees and create a central void, conceived as a third amenity between the media centre and the conservatory, nurturing a breath of fresh air in the dense and private fabric of the neighbourhood. In its relationship with the site, the conservatory offers the first response to this contradictory demand that consists of creating a facility that is both a bold symbol of public renewal and a discrete element of the historic residential fabric.

The project is based on a double reading. From the hillsides or the city centre, it is perceived as an architecture that has been present for centuries. Its indented volume, sparsely pierced, associates it at the domestic scale with the large houses nearby, built with the same materials, clear mineral facades, and tiled roofs. Meanwhile, in the tenuous space in the courtyard, the discovery of the unusual scale of the borings and the double-height front portico evoke a more monumental image of the facility and affirm its public nature.

The conservatory is built in Estaillade stone cut in the quarries of Oppède located just a few kilometres from Pradet. This technical choice was first guided by discretion in a historic neighbourhood. The conservatory faces the Church of Saint-Raymond Nonnat, which was also built during the 19th century in the same stone. It is this prolific production and proximity with the operators working with massive stone in the quarries in Provence that explain the undying economic relevance of stone.

This is a symbolic and technical response to the needs for acoustic isolation arising from the conservatory activities with regard to its neighbours. Of course, it is possible to create acoustic protections with synthetic materials or concrete, but there is something vital about enveloping the music in 35 cm of solid stones. The general form of the butterfly plan comprising non-orthogonal walls also determines the acoustic quality of the music rooms. 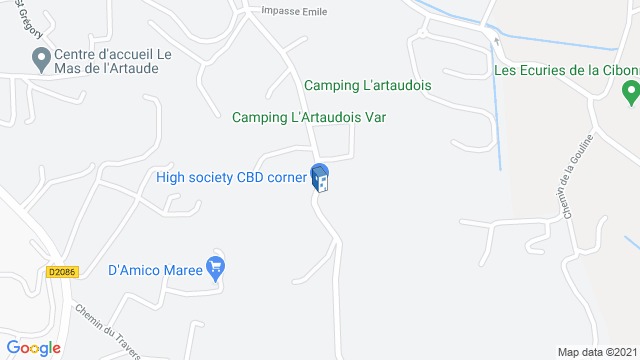 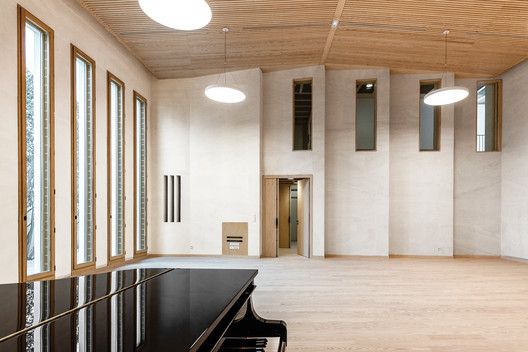 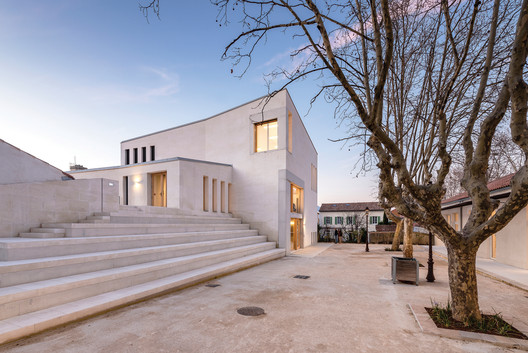