The panel of judges overseeing the design contest for Parque Observatorio Cerro Calán in Santiago (Chile) publicized their final decision on January 28, naming Chilean firm Jadue-Livingstone as the winner out of the five finalists.

Organized by the Las Condes Municipality in collaboration with the University of Chile and the Cerros Isla Foundation, the contest aimed to find the best architectural and landscape design for an upcoming park in Santiago, Chile: the Parque Observatorio Cerro Calán, a 45 hectare space to be built around the already existing Observatorio Astronómico Nacional. 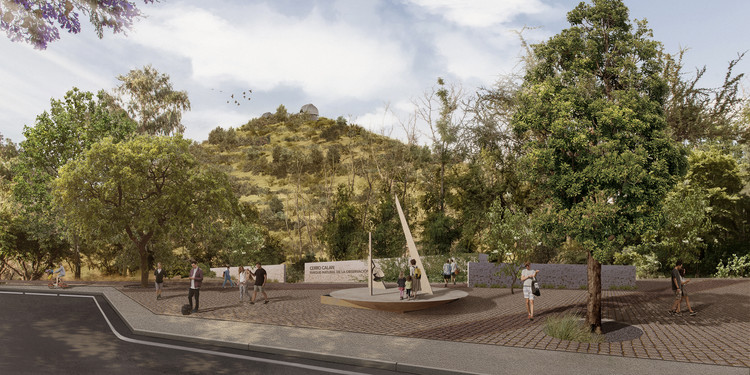 According to the winning team, their design "aims to highlight the natural environment of Cerro Calán, and to add to its attraction as one of Santiago's prime observation points. This will be done by building onto and enhancing the hill's pre-existing elements, like refreshing the hiking trails and installing new lookout points. These additions will serve as the foundation for an "Observation Nature Park."

Take a look at the final results of the design contest for Parque Observatorio Cerro Calán n Santiago, Chile:

The design focuses on revitalizing Cerro Calán as a communal greenspace for the surrounding neighborhoods as well as making it accessible via various methods of public transportation.

To ensure optimal connectivity, the project includes a walkway around the perimeter of the hill that connects to a nature trail that will link the municipality's larger parks, joining the once isolated Calán Hill with an extensive network of green spaces. The boardwalk aims to blur the line between the city and the base of the hill and will vary in height and width based on the surrounding buildings and the topography that forms its base.

Erosion Control and Improvement of Soil

Through aerial photos and land surveys, the team found that much of the area's soil was too degraded to build on. This degradation was the result of several factors such as unmonitored and excessive access, the removal of surface soil, and prolonged drought. Because of this, the first step of the process will be to rehabilitate the soil and flora found on and around the hill.

To enhance the hill's appeal as a prime lookout point and nature area and build on its history as a place of learning and observation, the project aims to install 12 multipurpose nature viewing areas that will encourage visitors to glimpse the nature around them as well as above them.

The proposed programs aim to add to visitors' experience in the park and to encourage them to spend more time there. The programs include maintenance of existing facilities that will prevent soil erosion and degradation. The programs are as follows:

The projects are categorized based on their intended use and the amount of privacy that they provide. The first is the boardwalk located at the foot of the hill, which is completely open and public. The second category is the overall daytime use of the hill and the various programs this includes, all of which promote the observation and protection of the surrounding natural area. The last category includes the "eventual" opening of the observatory and the elevated plaza. These will be the sites for weekly programs held by the University of Chile.

The other finalists in the design contest for Santiago, Chile's Parque Observatorio Cerro Calán are:

According to the panel, this project wasn't admitted for administrative reasons; however it was distinguished thanks to "its innovative and valuable ideas."