Throughout history, religious reformers and visionary starchitects have attempted to envision the future of our cities: from the Venetian model city of Palmanova to the multi-story housing complex for 5,000 people drafted by Italian architect Paolo Soleri, from Frank Lloyd Wright’s Broadacre City to Le Corbusier’s Radiant City, numerous masterplans have been crafted to illustrate some of the most unprecedented ambitions.

Today, people have never stopped investigating new approaches to urban planning that may enable a smooth transition towards a future green economy. In 2018, Dutch governments and knowledge institutions initiated the “2050 City of the Future” design study, with an aim to research how future cities should react to major challenges such as climate change, loss of biodiversity, natural resource depletion, and pollution. During this time of collaboration, VenhoevenCS, the leading architectural firm in the team, has conducted substantial conceptual research and provided plenty of expertise in sustainable master planning.

This article will look into several case studies that have been carried out by VenhoevenCS, and compare them with visions outlined by Le Corbusier in Radiant City. We will revisit the past issues and see if we have solved them in contemporary environments. Meanwhile, we will also discuss whether or not Corbusier’s design principles are still applicable, as we have entered the future that he once imagined.

When Le Corbusier first published his unrealized urban masterplan Ville Radieuse (The Radiant City) in 1933, Le Corbusier envisioned the future city to contain prefabricated and identical high-density skyscrapers, spreading across a vast green area and arranged in a Cartesian grid, allowing the city to function as a “living machine.” Le Corbusier proposed the idea of abundant roof gardens to recover the sunlit green space lost beneath the skyscrapers. Also, Le Corbusier suggested building elevated highways and auto-ports 5 meters above ground level to reserve the entire ground level for pedestrians.

It is true that through radical, extreme ordered symmetry and mechanical standardization, Le Corbusier provided a pioneering perspective on high-density housing typologies and efficient mode of transportation. Nevertheless, the architect seemed to neglect the fact that, when a city was designed like a “living machine”, and occupied by automobiles, a series of environmental issues such as greenhouse gas emission and global warming would emerge.

In VenhoevenCS’s research project, Olympic Aquatics Centre Paris 2024, the architects take a brand new and more sustainable approach in urban greening to solve the environmental problems. For example, a rain and groundwater recycling system is proposed, enabled by reduced hard surfaces of pavements and streets. All rainwater will be harvested and infiltrated directly into the ground to raise the groundwater level.

In Le Corbusier’s vision of future cities, a business district would be placed at the center, to connect separate residential and commercial zones via underground transit. Prefabricated housing towers would serve as vertical villages with their own laundromats as well as rooftop kindergartens and playgrounds. Standardized apartments would have access to shared public spaces. Residents would enjoy the peace away from industrial districts.

Though it was envisioned as a utopian city, Le Corbusier’s ideas have drawn criticism for their lack of public spaces and a general disregard for livability. Unité-like apartment complexes on urban fringes are now subject to high levels of poverty and crime.

VenhoevenCS, in their Wenzhou Ouhai South new city concept planning, takes zoning’s effects on ecosystem and community farming into consideration. Self-sustaining ecosystems in cities and countryside are promoted so that in the countryside, people can focus on renaturing and rewilding with wetland regeneration, peatland regeneration, and reforestation with indigenous plants and trees. Meanwhile, mixed-use zoning will replace monofunctional zoning to improve proximity and transform the linear economy into a circular and largely biobased economy. The architects also introduce high-rise indoor farming, as a strategy to move agriculture to cities and neighborhoods.

In the Ville Radieuse, Le Corbusier embraced the idea of car supremacy, suggesting that every block must be connected by cars. Corbusier saw no need of having roadside taverns and or free markets in the future. He wanted to demolish all farmers’ markets for the sake of creating an extremely clean and organized life.

Nevertheless, his idea may be no longer applicable in today’s world, since cars are not the only mode of mobility in our transportation system, and our buildings are made of multiple functions that require increased transparency and public access. The connectivity of surrounding neighborhoods and walkability to public facilities are becoming the key design criteria for contemporary society.

In VenhoevenCS’s built project Het Platform, the designers suggest using the proximity of living, working, and leisure as the main design principle to reduce urban traffic, and to create walkable and cyclable, car-free neighborhoods. Multimodal mobility hubs and stations are developed to connect neighborhoods with other parts of the metropolis. The architects also attempt to combine mobility hubs with logistic hubs and circular economy centers and propose to turn these into attractive urban centers.

Furthermore, it is advised that only main roads and railways are prepared for self-driving electrical vehicles.

Le Corbusier advised that each residential unit should be equipped with various public services directly related to family life: community centers, nurseries, kindergartens, open-air activity venues in the park, and elementary schools in the park. In Le Corbusier’s vision, there would also be a dedicated public service center in the residential building, which adopted a collective business model to purchase daily necessities in a unified manner.

Interestingly, the collective communal living that Le Corbusier believed is now happening around the world, as people are beginning to accept co-living as a future living trend under increasingly severe housing shortage. The restaurants, shops, and hairdressers that he once envisioned as essential facilities are providing meticulous daily activities for the residents of the community.

In VenhoevenCS’s Park More project, the architects further elaborated on Le Corbusier’s idea of enhanced community life, through developing socially inclusive, car-free neighborhoods as urban villages. Walking distances are being treated as a significant design index to ensure residents live within a reasonable distance to all daily activities to reduce urban traffic. The architects aim to make future neighborhoods self-sufficient in producing their own green energy, harvesting rainwater, growing food, and recycling products and resources, all based on the principles of a sustainable circular economy. 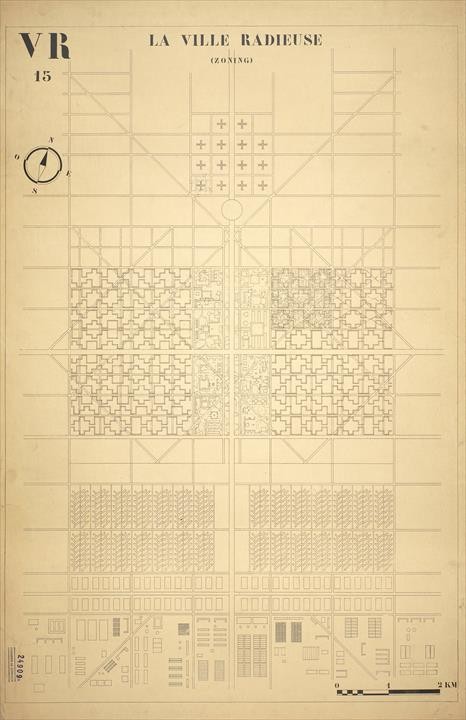