Save
A Windy City Welcome: Rethinking Hospitality Design in Chicago
Share
Or
Copy 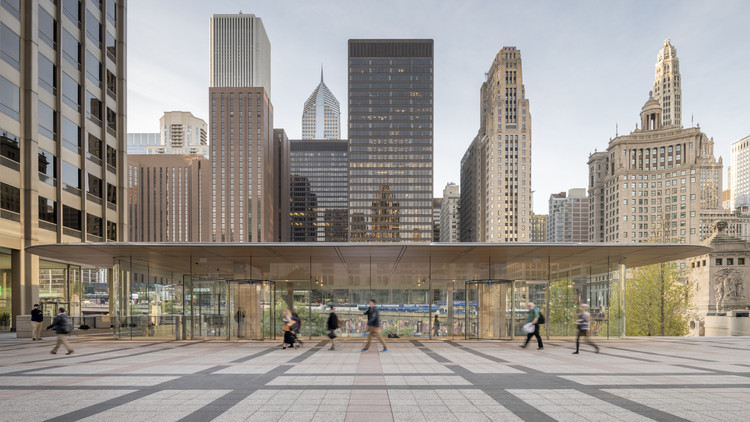 Previously hosting millions of domestic and international visitors a year, Chicago is home to a broad array of historic and contemporary hotels, nightclubs, restaurants and bars. Designed around leisure and memorable guest experiences, these projects express brand identity through space and form. Before the pandemic, Chicago was home to one of the busiest airports in the world, O’Hare. It also has a high concentration of federal highways, and is a major railroad hub. As renovations and ground-up constructions alike, the following projects explore a series of hospitality designs built before 2020. Elegant and diverse, they represent the Windy City's history of actively rethinking what hospitality can be, and in turn, how it may rebuild in the future.

The new Chicago Flagship celebrates the pure simplicity and enduring authenticity of McDonald's, welcoming both residents and visitors to a playful and informal gathering place in the heart of the city. The site is a full city block, just steps off Michigan Avenue, occupied since 1985 by the iconic “Rock ‘n Roll” McDonalds that emphasized drive-through services. Green space is expanded over 400%, producing a new park-like amenity for a dense area of the city.

L2O Restaurant, by Dirk Denison Architects, is a refurbishment design of a classic French fine dining restaurant to a contemporary seafood eatery in Chicago's Belden Stratford Hotel. The entrance sequence is defined by a dense grouping of Macassar Ebony columns, marking the transition from the hotel lobby to the environment within the restaurant. Partially obscured through the columns are a small lounge and a private dining room, both screened from the main volume by etched panels of glass.

Located at the intersection of the Chicago River and North Michigan Avenue’s ‘Magnificent Mile’, Apple Michigan Avenue extends down from Pioneer Court to the river’s edge, creating new connections between the city and the river. Sir Jonathan Ive said, “Apple Michigan Avenue is about removing boundaries between inside and outside, reviving important urban connections within the city. It unites a historic city plaza that had been cut off from the water, giving Chicago a dynamic new arena that flows effortlessly down to the river.”

Combining a hotel, offices, rental apartments, condominiums, and parking, along with one of Chicago’s largest green roofs, Aqua was designed to facilitate connections between people and the city. Its distinctive form is achieved by varying the floor slabs across the height the tower, based on criteria such as views, sunlight, and use. The overall design is the cumulative result of responses to specific conditions of density, environment, and use.

Terzo Piano Restaurant was designed as a changeable canvas with movable pieces and flexible seating arrangements. Seating 250 patrons the lunch restaurant is located within the Renzo Piano designed Modern Wing at the Art Institute of Chicago. The architects therefore were challenged with establishing a contemporary space that provided a complementary atmosphere to the Modern Wing.

In early 2004, VDTA was commissioned to design a 16‐story extended stay suites hotel at the corner of Lasalle and Huron Streets in Chicago by the site’s original developer, Duke Miglin. It was his desire to employ a staggered truss structural framing system for the building – something new to Chicago – for its speed and efficiency of erection. Construction began in 2007 but the project fell victim to the economic downtown in 2008. The unfinished existing structure was re‐planned for The Godfrey to provide 221 guest-rooms, spa and fitness facilities, street level lobby and hotel support spaces.

In 2013 the former IBM Building in Chicago, Mies van der Rohe's last completed skyscraper, underwent a significant renovation as a part of the tower was converted into a hotel. Dirk Lohan, the Chicago architect who helped his grandfather design the building nearly 50 years ago, was called back in to design the new hotel's entrance lobby. Lohan's lobby, the first point of contact for guests before proceeding to the second-floor reception, is a warm and welcoming space furnished with sofas and chairs that Mies designed for his family but never put into mass production.