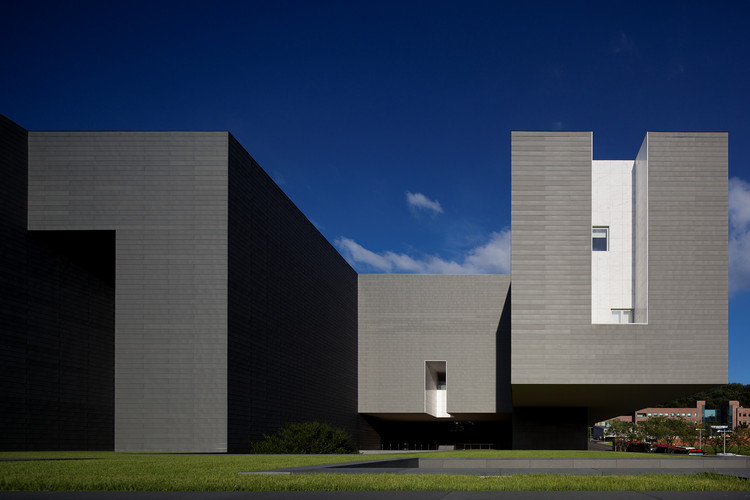 Amore Pacific is a brand of cosmetics, products used in industrial quantities by oriental women to enhance their beauty, hide imperfections or to deepen the whiteness of their skin, a sign of nobility and beauty, like the gaja* whose white features, charm and musical sensibility turned her into an object of cult and desire.

The first introduction that resulted in work in Korea, (the southern half, that is, since for many Koreans there is only one Korea, temporarily subdivided), coincided with the visit to Portugal by the owner of Amore Pacific, for the purpose of getting to know Álvaro Siza’s work. As I knew the architects who accompanied with him, it was my job to show them around. His intention was to formalise an invitation to design a museum.

Initiated by his grandmother, the cosmetics company had almost by chance begun to collect items related to the wellbeing of women. Cosmetic items, clothing items, decorative items as well as items relating to the tea ceremony. Today, the collection is immense, as are also the quality and the beauty of most of the items. Items of national value and interest, concerning things for which quantity also is quality. Enthused, the client wants to locate the museum in the centre of the city of Seoul, and so purchases more and more land, something which is so scarce on those shores and expensive, very expensive. We wait and the first project has not yet got off the paper.

Forty minutes drive from Seoul, in the outlying city of Yongin-si, Gyeonggi-do, Amore Pacific has a very large estate, which I like to call a campus, as that is what it seems like. In this campus are gathered the R&D – Research and Development, and the training departments.

There is a large grey granite building, where the research and investigation laboratories are concentrated. This building is the result of various additions and adaptations. And now it urgently needs major restructuring.

In another dark brick building are all the staff training facilities and the improvised museum, displaying only a small part of the collection. The rest of the ever-expanding collection is in storage, in the basement. Another small building, which is isolated, as if pushed into a corner, to the northeast, serves as accommodation for anyone who comes here from a distance to do training or research.

The exterior area is characterised by a huge collection of trees and shrubs that the client buys or transplants here from elsewhere. In Korea everything gets transplanted. From the huge, sculptural pine tree, that we are used to seeing in oriental prints, to the most subtle maples in varying colours. The transplants, set in groups, seem more like art installations: the trees linked together with thick bamboo canes, supporting each other until they develop roots.

The huge sports fields that still give sense to the maxima mens sana in corpore sano, are now abandoned in preference for the health club. At the start of the project the Laboratory was envisaged in the space next to the existing one, allowing most of the services to be moved and for the desired re-use of the old equipment. The short term need to include a new building for more laboratories would have to be considered, in the normal and predictable expansion process.

Then came the Pavilion, a multi-use space linking buildings and functions. And the respective outside spaces, extensive, generous. Next came the hotel, exclusively for private use to substitute the existing buildings which didn’t provide for the dignified reception of guests.

After the presentation of the sketch designs, another pavilion was requested. So, Pavilion II appeared.  While we are at it, it would be convenient to re-think the Gate House as it is the front of the Campus, of the Company. And why not re-think the outside spaces, now that the relationship between the existing buildings and the planned ones has become so obvious? A Campus is actually this, a relationship between buildings, where the external spaces act as a support. Or is it the other way around?

The Laboratory:
The laboratory building is big because the brief was big.
Parking in the basement. Social and technical areas in the semi-basement. Research and work areas in two floors that are raised above the ground in order to maintain the relationship of spaces and views. The social areas are made up of exhibition areas for the company’s art collection, meeting rooms, a restaurant and two conference rooms, one of which is in the form of an amphitheatre. And the Health Club. The research floors are as open as possible, in accordance with the express wishes of the client, who was clearly impressed by the relationship between spaces in the Library of Aveiro University, and in accordance with the need to ventilate and dissipate smells and fumes and to guarantee safety and for the other technical conditions typical of a laboratory.

The base; the building which forms the base is clad with slabs of slightly rough black granite. Over this building there is a partially landscaped terrace where the confluence of pathways and the separation of that which is on the ground and that which is suspended in cantilevers occurs. The volume of the laboratories is almost entirely clad in a double skin glazed screen on a metal structure. The faces and details vary between zinc and white marble, differentiating between spaces and also between functions. Despite being a box or a container for functions, the richness in the simple use of materials transforms it into a kind of Pandora’s Box in reverse, out of which come the most beautiful things that transform the least beautiful women in the kingdom of Korea.

Pavilion I
Located at the turn of the road between the Laboratory building and the existing brick building, Pavilion I, beyond fulfilling the function of a multipurpose pavilion, for which it was designed, also serves the function of coming around the corner. Which is not an easy thing. Rising above the ground level of the garden, ascending to the road level, creating paths from lower to higher levels, bending or twisting like a balancing gymnast, the volume folds around, making the corner. White concrete, window and door frames in timber and stainless steel. It will work even better.

O Hotel
The hotel occupies part of the existing football pitch and seems to fit into the hill on the Southside. With two stories and in the form of a “U”, the organisation is simple: the bedrooms are located in the two almost identical legs and at their junction are the service areas and the social spaces. The organisation or distribution of the rooms is inverted between floors, so that the ground floor bedroom has a different orientation to the one above, which gives privacy to the outside use and creates variety. Brick, exposed concrete and timber and stainless steel door and window frames characterize the exteriors.
The volume spreads out amidst the greenery outside.

Pavilion II
Pavilion II is necessary to support the functions of the existing building to the east and those of the Hotel. Pavilion II is a wall or walls to contain and define the exterior garden spaces and the ramped or stepped pathways.
Brick walls capped in stone, giving the desired continuity that nature will absorb. Pavilion II as was said before, came after like something unwanted, integrating itself in the whole, camouflaging itself within the rest.
A space that is reserved for internal events, it can receive visitors from outside, from inside and from the hotel, without interfering with the specific day-to day activities of each building.

Gate House or Porter’s Office
The access to the Campus is neither interesting nor sensible.
The new building apart from the porter’s office, reception and waiting area, functions also as a small dwelling for the night guard. In white exposed concrete, the volume also provides an area for the temporary storage of waste materials, which due to the dangers that they present, gives rise to very particular and specific requirements.

External Landscaping:
As if dealing with a ball of twine out of which we pull a piece and find it to be never ending, the external landscaping is a consequence of the buildings and the necessary moulding of the ground where the intervention has occurred. A site surrounded by lavish vegetation that through continuous transplanting transforms and renews itself. Like plastic surgery on an ageing body.
Men think, the work advances, optimism prevails. 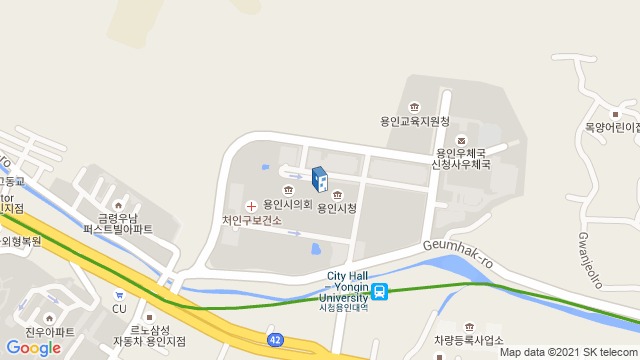 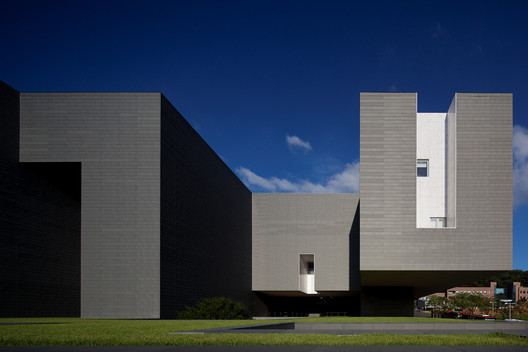