GRAFT and Brandlab have created a prototype for an ultra-fast charging station for E.ON Drive in Europe. The extendable system of modules was made to adapt to different sites and parking conditions. Reimagining the stopover for the future, the project focuses on user experience and integrated design as filling stations evolve over time. The design features a steel skeleton roof structure that can be customized with diverse panel materials, photovoltaics and responsive lighting. 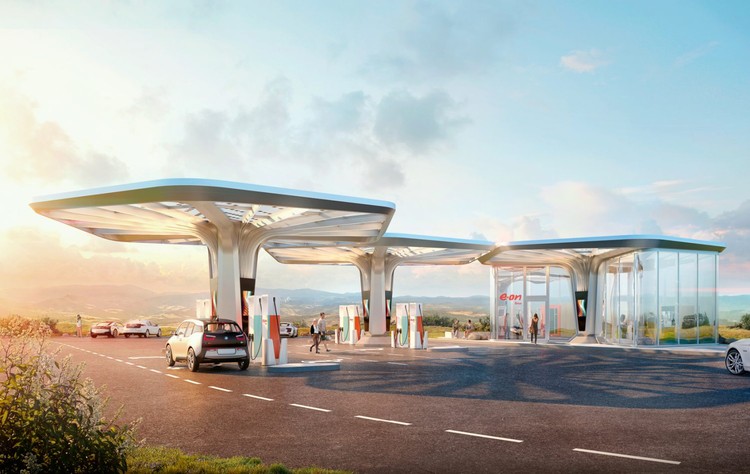 As the team notes, the charging station frames can be configured in different ways: either featuring an opaque roof with or without greenery; or a glass roof with or without integral photovoltaic panels. When implemented, the photovoltaic system supplies energy for the lounge and the integrated media technology. Slats beneath the roof act as filters, modulating and channeling sunlight into the charging bay area.

Based on two basic modules, the smaller of these two modules can be combined to form XS or S stations. With a rectangular footprint of around 3.5m × 5m, it was developed for use in existing car parks and service areas. The self-supporting steel structure allows the modules to be extended to create smaller drive-through variants with up to four charging points. With a hexagonal footprint, the larger module can be used for M and L stations. In the future, the modular concept can be extended to create XL hubs of varying sizes with amenities such as shops, spas, fitness and entertainment.

GRAFT touches on the lounges and materials as well, explaining that the station lounges feature "fully glazed external walls that create a sheltered space open to the surroundings. Natural materials are used throughout the interior to create a restful, relaxing atmosphere. Media elements are also incorporated in to the design, for example touch screens integrated in the furniture, which enable customers to communicate directly with suppliers."