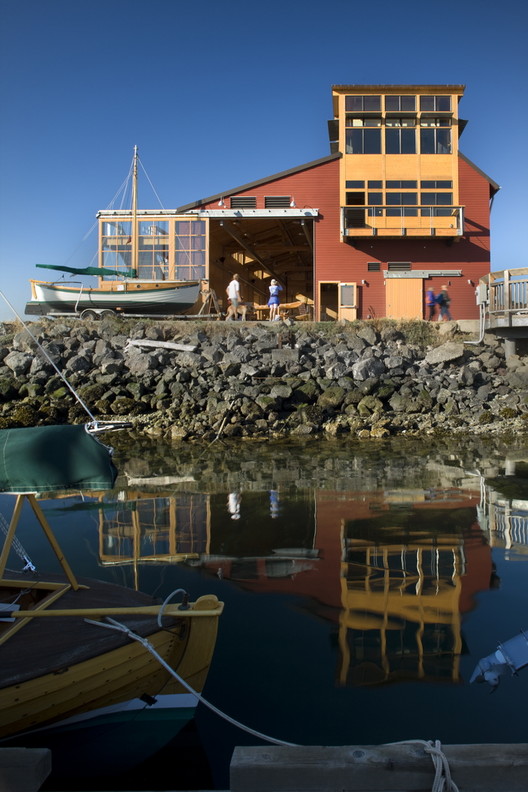 Text description provided by the architects. As a nonprofit organization committed to promoting and preserving a rich maritime heritage, on-the-water programs, and nurturing the art and craft of wooden boats, the Northwest Maritime Center was designed not only to protect but to actually improve and restore the waters of the Puget Sound. From energy use reduction to habitat restoration and material selection–all aspects of sustainability were considered by the client and the design team.

Located in Port Townsend, Washington the Northwest Maritime Center, truly reflects its surrounding community. The center recently achieved LEED Gold Certification, and was designed by Miller Hull Partnership. Follow the break to read more about this project, along with additional photographs and drawings.

The site of the Northwest Maritime Center was formerly a bulk oil terminal for over eighty years. To clean up this critical waterfront property on Port Townsend Bay, more than 2,400 tons of contaminated soil was removed and properly disposed and the old pier that supported barges loaded with oil was removed.

The new pier, the hub of the center’s on-the-water programs, was designed to minimize shadows over prime eelgrass habitat. Construction utilized innovative materials such as reflective panels and grating, and included a voluntary planting of more than 8,000 shoots of new eelgrass to restore fragmented eelgrass beds in the bay. Students and volunteers from the community assisted scientists and divers in the restoration process. Eelgrass plays a vital role in a shoreline's ecosystem as it is the nursery grounds for many fish and shellfish species. The first water source heat exchanger plates were installed in Puget Sound under the new pier to utilize the temperature of water to efficiently heat and cool the buildings.

In a unique public/private partnership, access to the shoreline, the center's second level walkways, as well as the waterfront boardwalk, were deeded to the city in perpetuity, making the outdoor spaces a gathering place for both visitors and full-time residents of Port Townsend. In addition, the maritime center partnered with the city in a pilot project for development of a low impact development (LID) pedestrian streetscape. This included the installation of raingardens to control and treat stormwater due to the proximity of Puget Sound. The center also worked with the city to establish the first Transportation Demand Management Plan in the city to reduce vehicle trips and parking congestion, and provide ample bike storage and outlets for electric cars.

Other energy use reduction strategies included abundant natural daylight and ventilation achieved through operable clerestory windows running the length of the buildings which minimized the need for artificial lighting. Furthermore, 100 percent of the center's power derived from Puget Sound Energy is from the utility company's "green power" program, thereby reducing the center's energy load on the city's power grid. One element that was not installed due to funding constraints was a solar system to reduce electrical usage. However, the center is primed and wired for solar panels to be installed on the roof if funding becomes available at a future date.

"A community-based planning process more than 10 years in the making, we ensured the Northwest Maritime Center’s two buildings were compatible with the other historic structures in Port Townsend’s National Landmark Historic District," said Craig Curtis, partner at Miller Hull and the lead designer of the project. "The two buildings, constructed of over 60% of FSC certified wood, occupy a prime location at the end of Water Street, at the transition between the old brick buildings of the late 1890’s and the adjacent Coast Guard clapboard buildings at the Point Hudson Marina, which were constructed in the 1930's."

A move toward LEED Gold certification was conducted at the later stages of the design process. "The intent was always to build a sustainable building,” said Curtis. “However, a donor learned that the project would easily qualify as a certified building under the LEED program." The Martin/Fabert Foundation stepped forward to support the campaign’s additional costs to incorporate other sustainable elements that would help it achieve LEED Gold certification.

"Every sustainable project needs a champion and given the center’s mission, sustainability goals, and prime location on Puget Sound, it was a wise investment on our part," said Lisa Martin. "We strongly believe that a sustainable building is key to ensuring the health of the center and its programs for future generations." 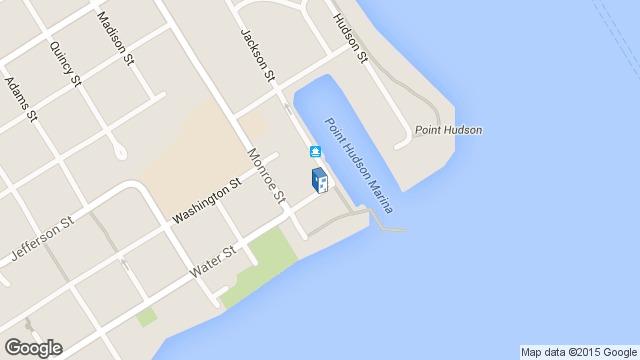