Save
How Are Public Washrooms Shaping Places in China?
Share
Or
Copy 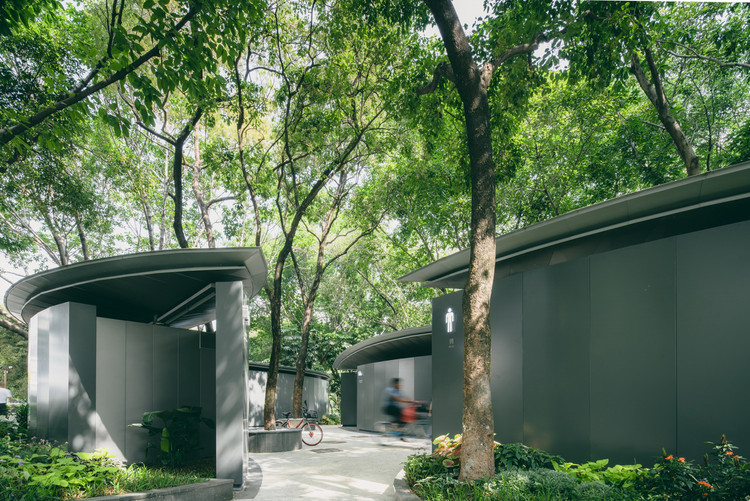 PP Garden, designed by People’s Architecture Office, is a renovation project in Beijing that aims to turn an originally narrow nasty office building toilet into a gender-neutral space for improved casual conversation, and fairer allocation between men's and women's wait times.

The design takes the social and cultural context of China into consideration. It acknowledges that public washrooms should provide psychological relief and social interactions for those busy passing urbanites. The design of public washrooms should also embrace the values of gender equality, that is, an equal distribution of time and resources between men and women when they have to access the washroom.

Large openings have been created in existing partition walls that previously divided the space by gender. Functions such as hand washing, grooming, and drying are incorporated into both sides of the wall to generate chitchat. Meanwhile, the partition walls are filled with hundreds of different plants to activate the space. People are free to rearrange the placement of the plants, and casually talk about the greenery and their life.

As weekend camping is gaining popularity among young urbanites in China in recent years, some rural areas around Beijing have been developed into a destination for outdoor lovers to gather and camp.

Designed by guó bàn ér architecture office, Tiankai Camping Park is located around 85 kilometers to the Southwest of Beijing. To convert the land into a camping park for young people, the client requested a minimalist design approach that reduces all unnecessary elements and pays tributes to the surrounding landscape.

The public washroom, situated on this site, is a tiny infrastructure project that serves the basic needs of its visitors. Since local regulations for the land does not allow for any type of new structure or building with a roof, the toilets are simply a series of perimeter walls, making it almost primitive.

A set of 2 toilets paired with a washing counter and a bench have been placed in 4 different locations within the large area of the camping park. The toilets and washing counters have been positioned thoughtfully for people to enjoy fantastic views of the park while washing their hands or washing the veggies and fruit they brought along.

The wash counter is equipped with a thick concrete plate poured with a slight slope which simply drains the water away when people are washing their hands. The natural stones and pebbles are collected from surrounding sites and crafted by local workers, showing the sustainable consideration of this project.

Establishing a Harmonious Relationship with Nature

Designed by Edge Studio, Nantou Public Toilet is located in the southwest woods of the intersection of Shennan Avenue and Nanshan Avenue, in the city of Shenzhen. The site has a special natural condition which includes a fifteen-meter-high crown and three-meter high branches. The vibrant branches and leaves are luxuriant in summers, covering the ground with enormous shadows, and providing pedestrians with shade in busy downtown areas.

When it comes to the design of a new public washroom on this site, the designers sought to preserve the existing trees and greenery as much as possible. They view the natural woods as the original owner of this place and the building as human intervention. Therefore, it became crucial to carefully integrate the man-made structure into the existing landscape. As a solution, the designers examined the gap space between trees and generated a green path and a built mass out of the organic forest. To make ways for the trees, buildings are split into small leave-shaped units, with the tip of the leaves forming the entrance, and the wider abdomen forming the toilet space.

When selecting and combining materials, the designer attempted to create a new modular system and a new order, so that the old bricks and tiles which have lost their integrity during demolition can be re-organized into a new form.

A modular steel wire cage was developed to provide a structural frame for the bricks and tiles. Within this spatial frame, the mottled old bricks and old tiles were carefully preserved like a piece of local history. The new public toilet becomes a product of breaking down and reorganizing the old and the new. 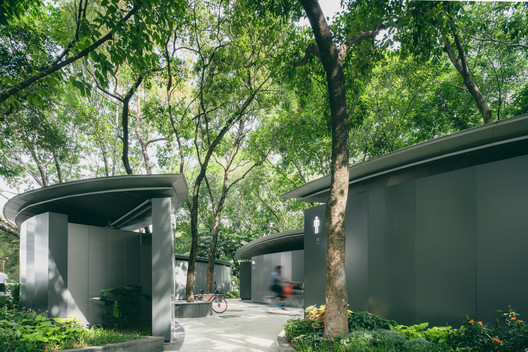