This award arises as one of the fundamental initiatives of REDBAAL —the Network of Architecture Biennials of Latin America—, seeking to recognize the best of the architectural production in moments of indisputable enhancement and presence of Latin American architecture on the international landscape scene.

The winners were part of a shortlist comprised of 20 projects from 7 countries. "We admire the architectural quality of each project presented and selected in the competition and applaud their representation of Latin American architecture as a profession that respects its cultural, social, urban, and natural context," said Executive Director of REDBAAL and the ON-03 Award Handel Guayasamin after the shortlist was revealed back in October.

As other spaces with high civic spirit, like the agora of Assos in Greece or the Piazza San Marco in Venice, the project emphasizes the construction of a void over the construction of isolated buildings. Spaces with a public void are created and “charged”, to become a catalyst for public life. In order to connect the city with the park, we proposed an open square that links both entities, bordered by the new municipal building on its two longer sides (north and south). The square, non-existent in the competition brief, became, therefore, the center of the project. An urban void that allows for a wide range of unexpected situations and events to happen, whether individual or collective. 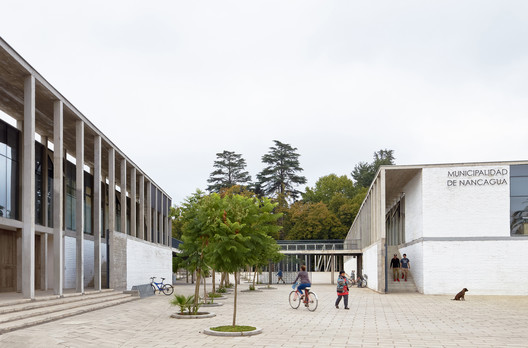