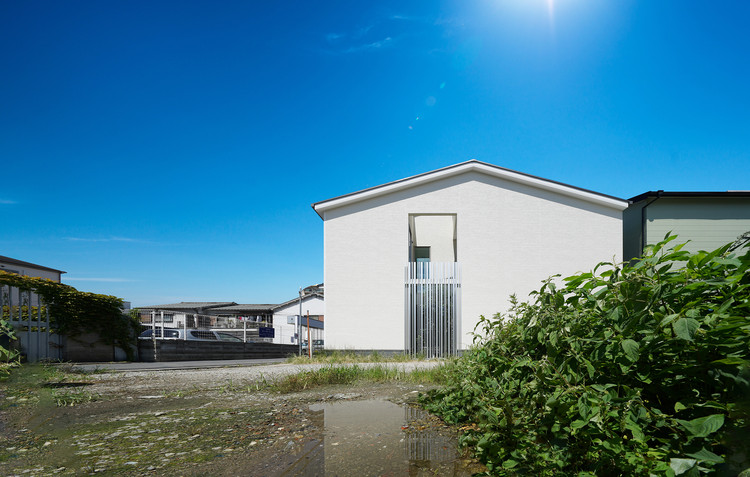 Text description provided by the architects. This is a guesthouse located in an area with a lot of small houses, close to the center of Osaka. It was required to have a highly adaptable space that is easy to use and comfortable to use, assuming the use of various races and generations visiting here. In addition, the client required that space which has a small court, light and wind, and Zen element which guest can experience Japan. There was grass on the south side of the site, which was rare in an overcrowded cityscape.

This adjacent open space was regarded as a positive surplus space and was a clue in design. In the gable-shaped volume planned to the limit of the size of the site, a small court of 1.8 meters square was arranged so as to penetrate horizontally toward the open space and vertically toward the sky. The vertical aluminum screen installed at the boundary between the court and the open space ensures privacy from the surrounding environment and plays an important role in security. Every rooms and corridors face the court to disperse the light from it. The kitchen, the sanitary and public space were arranged on the 1st floor. There are two guest rooms on both sides of the court on the 2nd floor.

The vertical screen composed of aluminum unequal-angle steel of 4 meters length is laid out with the blade side facing inward and the end side facing outward. We designed to open the line of sight from the inside of rooms and the court toward the open space while blocking the line of sight from the outside. By arranging angle steels densely for each, the surrounding environment are cut out in strips, and fragmented. Guests would be able to get a glimpse of the surrounding situation and feel the connection with the environment even though it is closed.

Several linear lights transform the density and cast an impressive shadow on the black stones laid in the court. The court extends horizontally to the open space, giving a feeling of depth wider than the actual size. There is no obstruction between the upper part of the aluminum screen and the ceiling beam on the second floor, and the view of the sky spreads horizontally. Looking directly above the court where the high and low trees are planted, a cut-out sky appears. Guests can enjoy various changes in the sky through the branches and leaves swaying in the wind. The shadows of the trees and screens are projected sharply inside the white interior. The activities of nature are engraved in a modest and neutral space with the passage of time. We aimed to create a space full of light and wind so that guests could remember their stay more clearly.