The team of von Gerkan, Marg and Partners Architects (gmp) has created a new vision for the Berlin-Tegel Airport in Germany. As of May 2021, the site will be developed into a research and industrial park for urban technologies. Dubbed the Berlin TXL–Urban Tech Republic, the project will transform existing buildings to house new functions, and include the addition of a new start-up and innovation center in the central terminal building.

In 2019, gmp was commissioned with the refurbishment and conversion of the former main building, the forecourt, and the tower. As architects of original Berlin-Tegel Airport, gmp explored various use scenarios for the old terminal buildings, as well as the adaptation of the existing energy center. As the team notes, in addition to an events and conference center, the project will accommodate start-up companies; it will also house Tegel Projekt GmbH, the company commissioned by the State of Berlin to develop the site.

Exposing the triangular structure of Berlin-Tegel, the new project will include vertical circulation routes linking the building with the future public areas of the former airfield. Lower levels will include space for conference areas, showrooms, workshops, and studios. From the second to the fourth upper floors, a new central spiral staircase will link the offices that are strung along a shared communication zone. In addition, gmp is proposing to make active use of the roof areas through a potential urban gardening scheme.

In cooperation with agn Niederberghaus & Partner, gmp has developed the basic concept for the conversion of the hexagonal ring containing the piers for Beuth University of Applied Sciences Berlin. The triangular construction grid will remain exposed and visible in the building ring as well as in the main building. The team notes that the inner forecourt, the conceptual core of the “drive-in airport” (Berlin-Tegel), will be remodeled to form a skywalk that links with the former terminal entrances via small bridges. 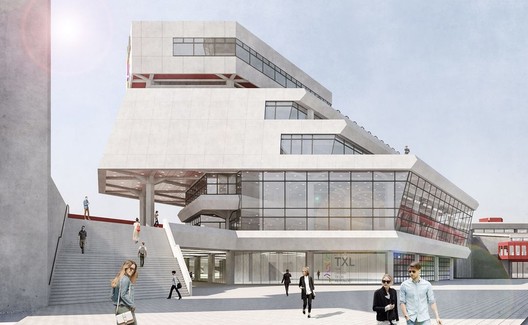