Save
Rethinking Embassy Design: Building Diplomacy Around the World
Share
Or
Copy

The architecture of diplomacy balances security and openness. As symbols of protection and representation, embassies are built for utility in both urban and rural contexts alike. At their core, they are also made to communicate the values and ideals of nations as welcoming structures and sustainable civic spaces. Today, modern embassy projects are made to meet rigorous security standards while embracing local culture and conditions. 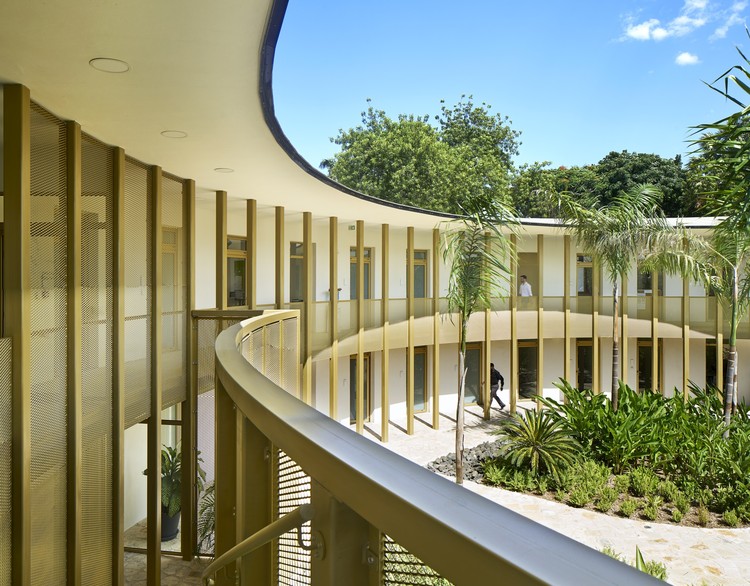 Our contemporary understanding of diplomacy has its roots in mid-15th century Italy. The Milanese sent representatives to other Italian city states, and their accommodations became the precursors to embassy compounds and consulate buildings. The first purpose-built embassies were in Constantinople during the early 19th century, and over time, the architecture of diplomacy has been carried out across multiple buildings and structures, from residences to chanceries. The structures are also usually open with services to the general public. The following projects explore embassy architecture, renovations and consulate designs over the last ten years as secure facilities and symbols alike.

Amman is a fast-growing city entirely made up of buildings in local natural stone: not only established neighborhoods, but also poorer districts, and not only homes, but also offices, hotels, museums and shops. The Dutch embassy project involved the renovation of an understated villa within a walled garden.

The compound of the Dutch Embassy consists of a five-hectare wooded area that slopes steeply towards the city. The design task was to situate the five buildings in the compound while retaining the site's landscape. The horizontal volume of the main building cuts into the hill with the sloping terrain naturally divides it into two programmatic units; the ambassador’s residence and the chancellery.

In 2007, an international two-stage competition was launched for the Turkish Embassy in Berlin. A basic concept consisting of the building floor plans and two images was requested in the first phase. This embassy design was developed with a team of ten people in addition to the three partners.

The building for the Embassy of the Republic of Ecuador in Colombia aims to provide through the architecture an image capable of expressing new diplomatic relations between the two countries. The architectural proposal is developed on a corner plot previously occupied by a house in the 1980s, in which the Embassy worked until it was moved for the new construction.

Embassy of France and French Institute in Jakarta / Segond-Guyon Architects

The French Embassy is established in Jakarta since 1975, along the prestigious avenue of Jalan Thamrin. This project for the new diplomatic campus comes from the will to bring together all diplomatic and cultural French services in Jakarta at a single location. The project was designed to provide a simple, readable architecture.

Until the summer of 2015, the Swiss Confederation was represented in Côte d’Ivoire by an embassy located in Abidjan’s Plateau district. The Office Fédéral des Constructions et de la Logistique acquired the former residence of the Norwegian ambassador in the city’s Cocody district, planning to renovate and extend the existing building in order to house its new embassy there.

Located in Lisbon’s affluent quarter of Restelo, the new Embassy of Egypt stands on a plot in Avenida Dom Vasco da Gama which is typologically characterized by a string of large free-standing villas of the 1940s and 50s, many of which have been gradually been converted into diplomatic residences.

The new French Embassy of Haiti consists of one circular structure in a large park. The design is inspired by the tropical architecture of several periods, and is made in respect of the memory of the land where it takes place. The pavilion was built with light steel and a wood frame with facades that filter views and protect from local site conditions.

Embassy of Finland in New Delhi Renovation / ALA Architects

The sculptural roofs - the most significant architectural feature of this embassy compound - resemble the forms of the snowy Lake Kitkajärvi near Kuusamo in Northern Finland. ALA Architects was commissioned in 2013 to design the renovation, and the