Croatia has long been a crossroads of culture. Located along the Adriatic Sea, it borders five countries and has some of the richest biodiversity in Europe. The built environment reflects influences from Central Europe and the Mediterranean, as well as both the Roman and Byzantine Empires. Today, a series of new housing projects are reinterpreting the country's past as architects and designers look to reimagine what the future holds. 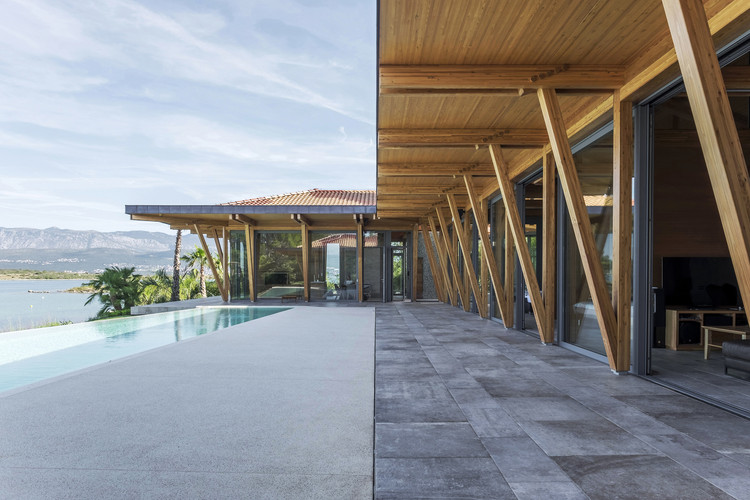 From the Dinaric Alps to Slavonia's flat plains, Croatia is home to incredible landscapes. Whether sited among mountains, forested highlands, islands or lakes, the country's new housing projects take advantage of views across the land in a varied geography. From the heart of its capital city Zagreb to more remote areas, the last two decades have seen investments in infrastructure that connect growing city centers with the countryside. The following housing projects explore the country's development through housing projects built within the last decade.

Wooden House is located on a spacious plot, set in a rich Mediterranean garden. The house is designed as an open structure with multiple entrances and exits, as a matrix of different ambiances within the interior and exterior of the house and transitional spaces in between.

This vacation house was designed as a half-buried building through simple, small volumes that are interconnected in such a way to create relationships between inside and outside space. Flat roofs were chosen as elements that would allow the maximum use of the outdoor living spaces, which was an important feature of embracing traditional Mediterranean architecture.

For the Villa Swallow, the spatial concept and programming were interconnected, as the key role is played by the relationship between geometrically "full" and "empty" volumes. Outdoor spaces—rooms in the open, are integrated by moving around and experiencing the house.

Gumno (threshing floor) is a circular flattened plateau surrounded by a low stone wall, used for threshing the grains in the past. Gumno was a place of labor, endeavor, and care, and a framework for consistent and coherent social interaction. The house is withdrawn into the background, to the highest part of the lot, and built on the very rear setback line.

The Issa Megaron project was designed around the context of the site boundary. As the team states, given that the "genius loci" is not only the island of Vis but actually the Mediterranean itself, they designed the house as a reinterpretation of ancient traditional stone dry walls to create a new rural, man-made topography.

Initially, there was a walnut tree that provided natural shade on site and represented the first outdoor space to enjoy. Over time, a terrace was gradually shaped around the tree, and eventually the idea of building the house emerged. A pitched roof, compact layout and wood cladding were functional elements of the region that were implemented into the design.

House B is situated on the slopes of Medvednica, in the northwestern part of the city. It is designed with a simple gesture of pulling the upper floor volume in a relation to the ground floor volume. This formed two valuable outer spaces as a functional extension of the interior of the home.

House Sperone is located in the old town of Novigrad within medieval city walls on the coast of the Adriatic sea. The desire of the owner was to build a holiday home at this unique location. The house has four bedrooms, a living area, a wellness and indoor swimming pool, and the volume of the house is fully defined by the surrounding buildings.