David Chipperfield Architects has received planning permission for Hertogensite residences in Leuven, a new 14-story residential tower in Belgium. Part of a global vision to redevelop a former hospital campus, the project is connected to nine townhouses and a four-story apartment building. 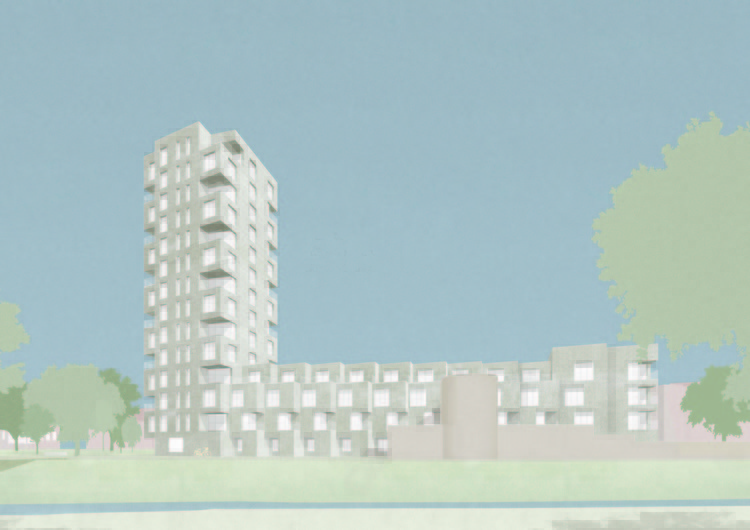 Located on the fringes of the medieval core of the Belgian city of Leuven, the new residential development designed by David Chipperfield Architects is scheduled for completion in autumn 2022. The project, part of a masterplan for the redevelopment of a former hospital campus that divided the west of the city from the center, is situated on a long narrow site between a fragment of the city’s medieval wall and a branch of the River Dijle. Putting in place a 14-story tower building connected to nine townhouses and a four-story apartment building, the Chipperfield scheme proposes to unify “these three distinct typologies into one through a coherent architectural language defined by the size of a living unit and the consistent use of grey-colored brick cladding”.

Emphasizing their individual character, the townhouses and apartments are highlighted in the plan, while the tower takes on a different approach, flipping the apartment’s balconies from one floor to the next. Generating a strong sculptural form, the proposal responds in key ways to its surroundings. “The tower has two apartments per floor and is crowned with a penthouse. The lower floors have a close connection to a new public park to the north, while the upper floors offer views to the center of Leuven. Large balconies, carved into the tower, take advantage of these views while being positioned to respect the privacy of the townhouses to the south”.

Parallel to the city wall and defining a new street along the fortification, the townhouses are, to the north, linked to the tower, and to the south, connected to the apartment building. In fact, “they step from three stories on the street front to four stories at the rear. Each townhouse has a garden that leads to a branch of the River Dijle”. On another hand, the four-story apartment building contains smaller rental flats and serves a transitional function, connecting the townhouses to an existing building, further embedding the new development in the neighborhood.