Save
Why Cities Should Transform Their White Elephants
Share
Or
Copy

Not all works of architecture are a success. In fact, there is a term reserved especially for architectural creations that have proven simultaneously extravagant and wasteful: "White Elephants."

One such work of architecture that received the ignominious title was a project in Villa Lugano, Buenos Aires. The building was to be the largest public hospital in Latin America but, after developers abandoned the project, it sat for decades in neglect and disrepair. Today, however, the compounds abuts a large public park and houses the Ministry of Housing and Development of Buenos Aires.

How can we convert White Elephants into efficient and useful spaces?

According to the Buenos Aires Secretary of Urban Development, the key is to focus on the human scale:

The new Ministry of Housing and Human Development of Buenos Aires took over the structure that was to be a hospital specializing in tuberculosis but was left half-completed in 1955. After laying empty and neglected for 80 years, the building was transformed into a modernized government office sitting in a public park. After the demolition of the old structure, in 2018, the Villa Lugano project jump-started the urbanization and integration of the surrounding neighborhood by revamping the previously deteriorated space.

The new 21,000m2 site includes an underground space, three office floors for more than a thousand employees, and a public terrace that doubles as an observation deck to view the city. The main floor includes a dining area, a multi-purpose room, an auditorium, and a branch office for the Banco Ciudad. The ultimate goal of the project was a building with open spaces and floor plans unobstructed by beams or other support mechanisms. The spacious interior is the result of a series of revisions to the building's groundwork.

The public park includes 1.2 hectares of green space and children's play areas, which were designed by residents of the surrounding neighborhood. This user input and participation in the design and building process was encouraged by the Director of Urban Anthropology, an entity that analyzes and addresses socio-economic issues in urban development. Keeping in mind the human scale was ultimately the key to the projects created by and for the area's residents, in this case, the park and public spaces. More than 4500 people were involved in laying out the different features of the park, including the greenery and trees, the recreational facilities, and the walking and running paths. They even chose the name, dubbing the new space White Elephant Park.

The project that would change the face of Barrio 15 began with the demolition of the abandoned building in October 2018. While the designers thumbed through their options for rehabilitating the structure, the other team members determined what couldn't be salvaged, namely the flood damaged facades, weakened support structures, and other severely deteriorated components.

The renovation did more than increase accessibility and security within the area. It jump started a plan to develop and revitalize vulnerable areas to the south of Buenos Aires by removing barriers that divide these zones from the rest of the city. The integration of Villa 15 and the improvement to the quality of life of its 25,000 residents was just the beginning according to Álvaro García Resta, the current secretary for Urban Development.

The architect explains that "the challenge was combining 3 projects into 1. The demolition of the White Elephant began at the same time as the Ministry of Housing and Human Development's projects, not to mention the groundwork for the park was underway. The new public space instilled a social balance and became a meeting place for the people and the State. For those involved, it was a way to reverse past neglect and build for the future. The Hidden City regained visibility and gained a green space equipped with recreational areas and an amphitheater." Another one of the project's goals, according to Resta, was to achieve a constructive synthesis via an intervention that made an impact while remaining respectful of the context into which it was built: "The building makes itself known without overtaking the surrounding public space."

The facades are made of reinforced concrete and include balconies that run the length of the structure, combined with metallic protectors that add thermal regulation. Simple and low maintenance, the new building aims to neutralize the footprint left behind by its predecessor. The facility includes parking for 102 cars and a perimeter filled with trees and surrounded by urban real estate. Ultimately, the project brought fresh circulation to the area, adding value to the zones marked by the streets De la Rosa, Hubac, Cañada de Gómez, and Timoteo Gordillo. The area's integration included the installation of new sewer and water lines and the underground installation of electrical and fiber optic networks. This led to the revitalization and installation of streets, walk ways, ditches, light fixtures, and areas meant for the overall comfort and enjoyment of the zone's inhabitants. This led to the arrival of more than a thousand people commuting to the area for work, which in turn led to more employment and improved the overall security of the area.

In a survey conducted by the General Director of Urban Anthropology, the residents unanimously agreed that security was the ultimate goal of the project and, among other accomplishments, this led to the installation of LED street lights and pedestrian friendly streets.

In many ways, this project not only revitalized the area by reactivating its economy, it also destigmatized the neighborhood once dubbed the Hidden City. Today, the residents are no longer burdened with alias given to them as a byproduct of the informal settlements that mark the area. Now, they have claimed their own name. 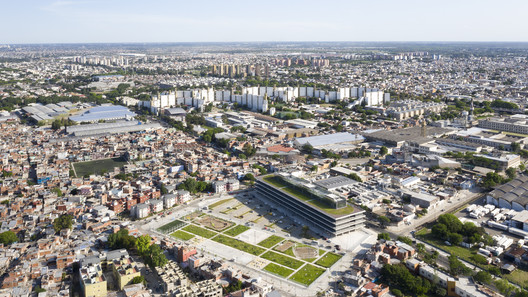