Save
White Elephants: Over-Budget, Unsuccessful, and Embarrassing Architecture Projects From Around the World
Share
Or
Copy

Not every piece of architecture can be an economic and social success. But there is one dreaded term reserved for only the mot wasteful of projects: "white elephants." The term comes from a story of the kings of Siam, now Thailand, who would reportedly gift sacred albino elephants to courtiers they didn't like. Refusing the gift from the king would have been unacceptable, but being sacred, these animals were forbidden from work, leading the courtier to financial ruin—a fact the kings knew all too well.

Of course, in architecture the term "white elephant" is used frequently to disparage certain projects, and whether a project is deserving of such infamy is usually a matter of perspective. Often eyesores or reminders of poorly spent funds, these projects refuse to be forgotten despite few wanting to remember them. Dotted around the world and across history, they all have the same thing in common: although they may (or may not) have once looked good on paper, they probably should have just stayed on paper.

This 230,000 square meter, eight-story bus station opened in 1993 with “indoor micro-metropolis” aspirations. The architect, Ram Karmi, even went on to win the Israel Prize for architecture. But the Tel Aviv Central Bus Station came to contradict his success, given the derelict state of the megastructure. The thousands of stores struggled to find tenants, the innards of the concrete giant are a confusing maze of corridors, and its location in southern Tel Aviv was illogical for a bus terminal in the first place.

Today, entire sections of the structure are uninhabited or used only for illicit purposes; old shops and winding halls conceal sex workers, drug sellers, rave throwers and others who appreciate the winding darkness. – 99% Invisible

2. Palace of the Parliament – Bucharest, Romania

The third largest building in the world, the Palace of the Parliament has a floor area of 365,000 square meters and costs over US$6 million per year just to heat and light, a fact that is especially astonishing considering 70% of the building remains empty. The building was born from the dictatorship of Nicolae Ceausescu, with construction of the palace including the displacement of forty thousand people and the demolishing of churches, hospitals and religious buildings.

The Olympic building that has perhaps caused the most detriment-per-capita, the 1976 stadium in Montreal has been fraught with problems from its conception through to today. Its complicated design and delays escalated the project’s cost to the point that the final Olympic debt of C$1.16 billion wasn’t paid off until 2006. Today, the stadium still lacks a permanent tenant and its roof remains structurally unsuitable.

Built in 1734 by Maharaja Jai Singh II, the outdoor Jantar Mantar Jaipur site consists of nineteen astronomical instruments made of stone, including the world’s largest sundial, with a with a 22.6-meter-high gnomon arm. The reason for the monumentality of the instruments was the Maharaja’s belief that the small-scale instruments used by Ptolemy rendered inaccurate results. However, the opposite was true, with their largeness making them easy to misalign, and the complex soon fell into disuse.

Partially opened in 2011, construction on the two final buildings of the Peter Eisenman-designed City of Culture of Galicia was finally halted in 2013 following under-performing visitor numbers and extremely high costs.

'It was born in the Spain of excess and is opening during an economic collapse, as a sort of monument to the construction bubble,' wrote one Spanish journalist; the British critic Oliver Wainwright called it 'a bloated vanity project.' – Architect Magazine

Smatterings of life—renovations and a slight increase in visitor traffic—keep New South China Mall afloat, though barely. The 2350 store-mall still remains largely vacant 11 years after its opening, largely due to its location in Dongguan, where most of the 10 million residents are financially poor migrant workers rather than the middle or upper class.

Outside the mall, a giant Egyptian sphinx and a replica of the Arc de Triomphe were erected alongside fountains and canals complete with Venetian gondolas. It even boasted an indoor roller coaster. – CNN

The Ciudad Real Central Airport is a clear white elephant, having cost €1.1billion to build and closing after three years of operation. With its final flight having taken off in 2011, its feature on a 2013 episode of Top Gear is likely the most action seen in the airport’s recent history. The airport’s initial owner filed for bankruptcy with €300 million of debt, and the airport was finally sold this year for €56 million following a series of failed auctions, including one that saw a lone bid of a mere €10,000.

Naypyidaw became the capital city of Myanmar after a mysterious change from Yangon (also known as Rangoon). A warning from an astrologer is among the speculated reasons for the switch in 2006. Naypyidaw’s geographic size (it is six times the area of New York City), its 20-lane roads, and its giant but empty shopping malls, all emphasize its ghost-town status.

The city feels like an extreme test of the 'if you build it, they will come' theory. But so far, with the government already having moved at least one of its investment agencies back to Rangoon, it’s looking like a spectacular failure. – The Guardian

Perhaps the poster child of architectural white elephants, the Ryugyong Hotel in Pyongyang holds a perpetually pushed back opening-soon date. At 105 empty storeys, it is the world’s tallest unoccupied building.

'Today, nearly 30 years and an estimated $750 million later, this looming, gleaming, futurist-modernist arrowhead of a building is essentially a glorified telecommunications antenna.' – The Daily Beast

Architect Santiago Calatrava has famously come under fire for his art complex in his native town, both for its crumbling roof just eight years after completion and for exceeding the original budget fourfold. Despite its tourist appeal and appearance in the movie Tomorrowland, locals have been indifferent to the monumental complex. In an alternate form of tourism, it was at one time a key stop on a Valencia “wastefulness tour” that aims to show foreigners where their economic contributions are going. “They are interested to know where ... is the money," explained Miguel Angel Ferris Gil to NPR when he ran the tour in 2013. "And we go to show you where there isn't the money — at the public schools, at the hospitals."

Following a RIBA competition won by Nigel Coates Architects, this £15 million project opened in March 1999. However, visitor numbers were not enough to sustain cashflow and it closed after just a little over a year. Sheffield Hallam University eventually gave hope to the building in 2003 by buying it for £1.85 million for use as a Student Union.

Correction Update: Regarding the City of Art and Sciences in Valencia, this article originally stated that the complex "is" a key stop on the "wastefulness tour" mentioned. In fact the tour no longer operates, so the article has been changed to reflect this. A link has also been changed which originally directed to an article about Calatrava being sued by the city of Valencia; Calatrava was never sued by the city. In addition, while (as mentioned in this article's introduction) the designation of "white elephant" is subjective, the following clarifications have been requested by representatives of Santiago Calatrava: 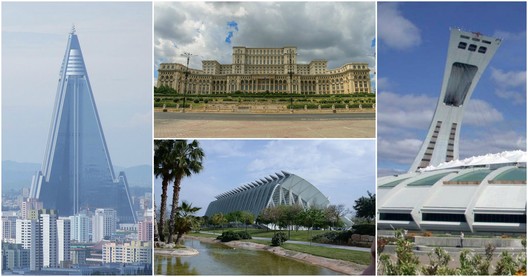