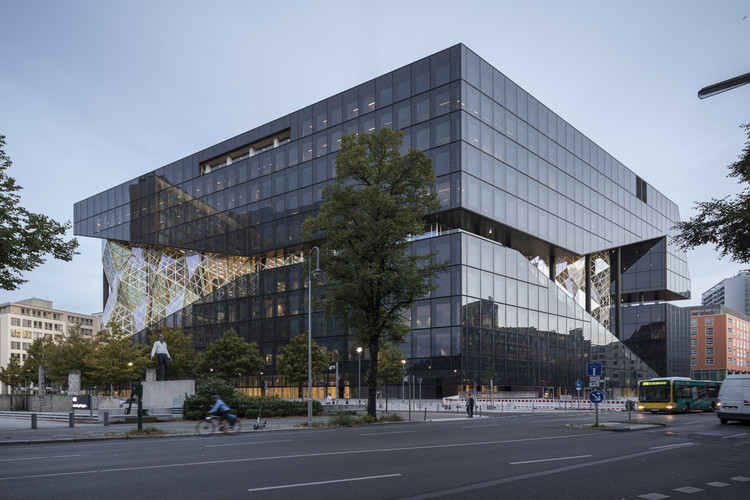 Text description provided by the architects. Axel Springer has launched a move from print to digital media. Its new building on the campus in Berlin acts both as a symbol and a tool in this transition - a building to lure the elite of (Germany’s) digital Bohemia. Bisected by a diagonal atrium that opens up to the existing Axel Springer buildings, the essence of the design is a series of terraced floors that together form a ‘valley’ that creates an informal stage at the centre - a place to broadcast ideas to other parts of the company.

The genius of print is that it is a cheap, physical, hyper-accessible embodiment of a complex collective effort, for which so far the digital has been unable to find an equivalent. Architectural offices are similar to newspapers in that they produce complex assemblies and selections from radically different sources of information.

As architects, we have experienced the advantages: speed, precision, smoothness. But we have also suffered one crucial consequence: the relationship between the worker and his computer, which isolates him in a bubble of introverted performance, inaccessible to collective overview.

In the classical newsroom, dominated by smoking, typing journalists, each inhabitant was aware of the labour and progress of his colleagues and of the collective aim: a single issue, with the deadline as a simultaneous release. In the digital office, staring intently at a screen dampens all other forms of attention and therefore undermines the collective intelligence necessary for true innovation.

We therefore have designed a building that lavishly broadcasts the work of individuals for shared analysis. The new office block is injected with a central atrium that opens up to the existing Axel Springer buildings - a new centre of the Axel Springer campus.

The design was developed around a series of terraced floors that together form a digital valley. Each floor contains a covered part as a traditional work environment, which is then uncovered on the terraces. Halfway through the building, the valley is mirrored to generate a three-dimensional canopy.

The common space formed by the interconnected terraces offers an alternative to the formal office space in the solid part of the building, allowing for an unprecedented expansion of the vocabulary of workspaces: a building that can absorb all the question marks of the digital future.

The public can experience the building on three levels - ground floor lobby, meeting bridge, and roof-top bar. The meeting bridge is a viewing platform from which the visitors can witness the daily functioning of the company and how it evolves. The ground floor contains studios, event and exhibition spaces, canteens and restaurants.

The building is situated opposite the existing Axel Springer headquarters on Zimmerstrasse, a street which previously separated East and West Berlin, at one of the city’s most significant locations. 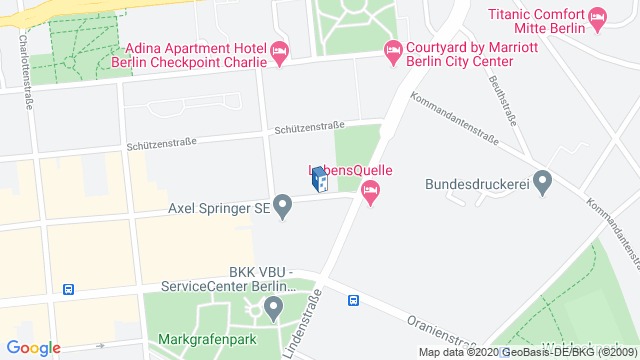 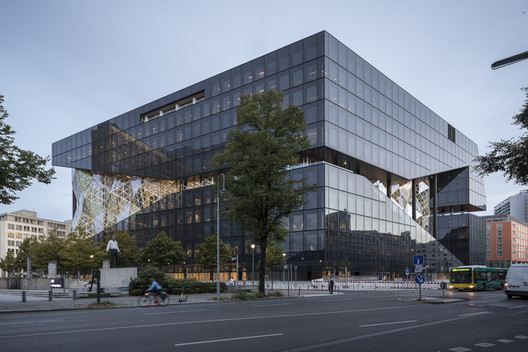