The results of the International Competition for the Architectural Landscape Design Concept for the Tuchkov Buyan Park were just revealed. The proposal by Studio 44 in consortium with WEST 8 won the first place, JV Vogt in consortium with Herzog & de Meuron won the second place while AB CHVOYA in consortium with KARAVAN landskapsarkitekter took the third position.

The Tuchkov Buyan Park Competition organized by The DOM.RF Foundation and operated by Strelka KB was first initiated by the Government of Saint Petersburg during September of 2019. In fact, Saint Petersburg residents have wished to see an urban park on Vatny Island for years. Through this contest, Tuchkov Buyan will become the city's first park with direct river access. The intervention will also allow the city's green spaces to be united in a single, unbroken pedestrian route: from the Field of Mars and the Summer Garden via Trinity Square and Alexandrovsky Park to the islands. The embankment between Tuchkov and Treasury Bridges and Academic Likhachev Square will be transformed as well.

229 teams from 50 countries applied to participate in the competition, of which 8 teams were chosen to develop proposals. The jury was represented by 14 international experts in the fields of architecture, landscape design, and urban planning. Read on to discover all the entries, with images of the proposals and descriptions.

Studio 44 in consortium with WEST 8

The concept is focused on creating romantic landscape views and providing panoramic city views. It is impossible to guess which view will open up in front of you when you turn a corner or climb a hill. This is a park for long walks and watching sunrises and sunsets, changing seasons and moods, water reflections, the glare of the sun and moon. The park features a variety of spaces where river nature is combined with vibrant city life.

The concept highlights the historical identity of the area. Participants describe the meaning of the word 'buyan' as a non-existent fairytale landscape: an invisible, legendary island. Throughout history, the topography of the area has been changing all the time. By combining all the topographic layers of the island with Malaya Neva and laying them on top of each other, the participants got the outlines of a valley that recreates the natural character of the former coastline. This valley is the embodiment of the word 'buyan'.

The key purpose of the park is to allow you to take a break from the city. It is a tranquil park designed for relaxation and contemplation, enjoying the landscape. All of its functions are designed for this purpose. Until the middle of the 20th century, this place was a constantly changing landscape anomaly in the city center. A wetland, a peninsula, a larger island, a small archipelago, and, last but not least, a part of the Petrogradskaya District: the project reflects the entire history of the site's relationship with water. The abundance of plants and multiple layers keeps the space connected with the history and nature of the city.

The concept is based on the Russian fairy-tale 'The Twelve Months' by Samuel Marshak. This is a fairy tale about a girl who went to look for spring violets in the forest and met 12 fairy-tale characters: January, February, March, and others, who changed all 12 seasons in front of her eyes. Modern bioclimatic and technical solutions make it possible to turn this fairytale into reality. Visitors will see the reflection of the different seasons in the park. For example, there are two pavilions: one features a skating rink which is available during the summer and the greenhouse where you can find blooming flowers in winter.

The 'culture' of the city through the 'nature' of the river. The park consists of 2 parts. Oriented to the city, the formal garden plays upon the history of gardens in Saint-Petersburg, exaggerating the long framed views in a series of site experiences. 'The Nature Park': nearing the Neva River, the park assumes a wild character with an expansive, appealing, and diverse area.

In collaboration with BuroHappold Central Europe

The idea is to bring back primitive wilderness, natural lives, indigenous fauna, and flora. Nature will, slowly but surely, grow back over time in the very heart of the city enriching the quality of urban living. The forest would slow people down, offer a moment to breathe, and enjoy the silence.

In collaboration with Unidraft, HPBS, MIC, Orchestra design and Ernst&Young

The project brings us back to natural roots: the river, pine forests, granite rocks, and wetlands with a variety of mosses. Participants not only recreate the natural landscape but also build a park program around it, which allows to raise awareness about the historical landscape of the area, ensure respect for the environment and the possibilities of harmonious coexistence with nature.

St Petersburg is a city of stone and water, one of the few cities built on the islands. Water can change the landscape, and islands can appear and disappear. The authors of the concept propose to introduce water into the park, which will change the existing outlines and create the living island landscape. The concept of the park opens access to the Neva and brings back lost flora and fauna. 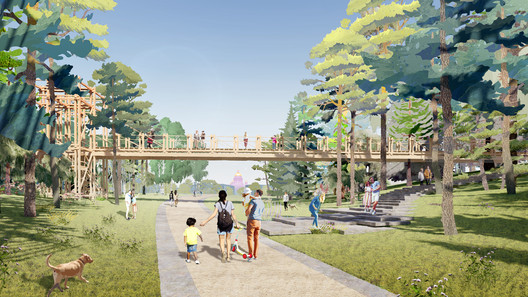