Marking the 80th birthday of architect Ricardo Bofill last December, photographer Sebastian Weiss recently captured the designer's iconic La Muralla Roja in Calp, Spain. The housing project references popular architecture of the Mediterranean and was inspired by the tradition of the casbah. The striking colors that cover the outer and inner facades are selected to both contrast nature and complement its purity. 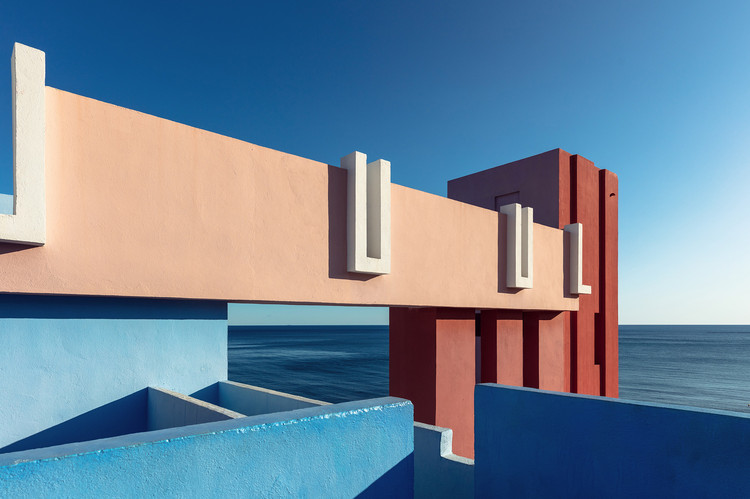 Formed like a fortress, the project appears as if it is emerging from the rocky cliffs it sits on. Through the photographs by Weiss, the project's labyrinth-like quality begins to be revealed. The design corresponds to a precise geometric plan based on the typology of the Greek cross, and its organization challenges the increasing division between public and private space through its reinterpretation of the casbah, the walled citadel architecture of North African countries.

Characterized by a series of interlocking stairs, platforms, and bridges, the project's organization is a modern illustration of the circulation in a typical casbah, providing access to the 50 apartments that form La Muralla Roja. Various tones of red paint cover the exterior facade, accentuating the contrast with the landscape.

Stairs and circulation surfaces, on the other hand, are treated with different tones of blue ranging from sky-blue to indigo and event violet, depending on weather the intention is to contrast with the sky or create visually continuity with it.